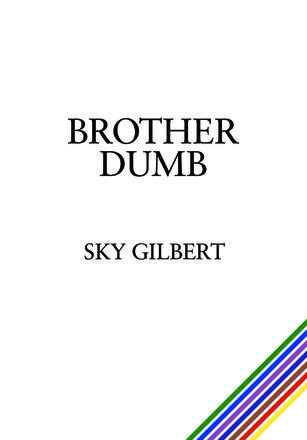 Brother Dumb is also a work of fiction.

Brother Dumb begins in the mid-40s, but spans decades, delving deep into the five tortured relationships that have shaped one writer’s psycho-sexual history — but it also details his bitter literary decline and withdrawal from public life. Brother Dumb is a misanthrope. His withdrawal from the world is as famous, or infamous, as his writing — something that he takes great pains to explain is not a desperate cry for attention.

So why publish this memoir? Why expose himself to a world of stupid, lecherous, greedy, evil, and calculating people?

Because he can’t not write. And because, somewhere out there, a kindred soul might actually be reading. . . .

Other titles by Sky Gilbert