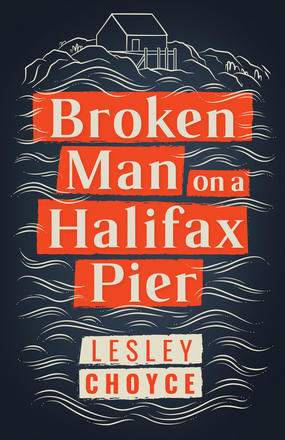 Broken Man on a Halifax Pier

Broken Man on a Halifax Pier

SHORTLISTED FOR THE 2021 EVERGREEN AWARD
A tale of one man’s shipwrecked life and an unlikely crew of rescuers.

Fifty-five-year-old Charles Howard has lost his long-time journalism job and has been swindled out of his life savings. Standing by the edge of Halifax Harbour on ... Read more

SHORTLISTED FOR THE 2021 EVERGREEN AWARD
A tale of one man’s shipwrecked life and an unlikely crew of rescuers.

Fifty-five-year-old Charles Howard has lost his long-time journalism job and has been swindled out of his life savings. Standing by the edge of Halifax Harbour on a foggy morning, contemplating his dismal future, his ritual of self-pity is interrupted with the appearance of the mysterious and beguiling Ramona Danforth. And so begins a most interesting relationship.

On a whim, Charles asks Ramona to drive him to his childhood home, Stewart Harbour, a fishing village populated by rugged individualists far down Nova Scotia’s remote Eastern Shore. Charles left the Harbour immediately after graduating from high school and never looked back. And now that he's returned, the past starts catching up with him in ways he could never have imagined.

She never really told me why she was there at 6 a. m. on that damp Halifax morning in April. I can’t even rightly explain what I was doing there either, standing at the end of a dilapidated pier, staring into the dark waters of the harbour, lost in thought.

I suppose it had something to do with the fact that my life had gone to shit, that I no longer had a job, that I’d lost my life savings and was reduced to living in a “bachelor” apartment in the North End. Yeah, it might have had something to do with that. But I think that a guy like me, fifty-five years from being born, just finds himself eventually at a moment like this, staring into the water. Contemplating.

Even now, I like to think of it as a literary moment. I was a writer, after all. Not like a real writer. Not a Hemingway or Fitzgerald, not one of the greats. Not even one of the lesser greats. A pipsqueak of a writer. After playing at reporter for a number of years, the Tribune let me write features about anything I wanted. But, alas, the Tribune was no more. How could I know when I set about embarking on my so-called career that newspapers were going to slowly begin to vanish? I was a dodo bird. A dinosaur. Pick any extinct species and I was just that.

But if any of this is going to add up to anything, I should go back to the beginning. The whole convoluted tale will come out in due time. So let’s get back to April, the pier, the fog, the lone man standing by the edge of the water where once, long ago, the bodies from the ill-fated and legendary Titanic were landed ashore. This was a literary moment, remember. Ill-fated ship, April the cruelest month, my life a modern Shakespearean tragedy, man fallen from great heights (modest heights, really) through his own hubris (a word I had just recently added to my vocabulary). Man alone, alienated in a hostile universe. No, an uncaring universe. A universe that didn’t give a Monday-morning shit about him or most probably anything else.

And then she walked up to me.

I didn’t notice her at first, didn’t hear footsteps or anything. It was like she dropped out of the sleepy grey clouds hovering above. I was deep in reverie — yes, a grandiose, dark, endless, self-pitying reverie. A man feeling bad. Just plain bad. With no particular shred of hope for things to get better. Must have been painted all over my face.

“I get it,” she said with no other words of introduction. “Broken man. ”

At first I thought it was just one of those many voices in my head. But then I looked in the direction from which the voice had come. It was a woman. A good-looking woman at that. All alone. On the pier at 6 a. m. by the misty misbegotten harbour.

“Get you. ‘Broken man on a Halifax pier,’” she said. And her mouth went up on one corner. Not a smile exactly. An indication of a game.

“Sure,” I said. “But why would you want to take my picture?”

Instead of answering, she lifted a cellphone out of her purse, walked a step closer to me and clicked.

“No. Nothing like that. ” She walked another step closer, stared down at the water and then directly at me. For a second, I thought I knew her. Or at least that I had seen her somewhere before. Something about her was familiar.

“It looks cold and uninviting,” she said, nodding at the swirling foam in the harbour water below.

“I wasn’t going for a swim if that is what you were thinking. ”

“No stones in your pockets? Did you forget them?”

“I’m not good at planning ahead,” I said. “Besides, I’m more of a bridge man. A leaper, if it ever comes to that. Unfortunately, they have the bridge walkways all caged in now. Always someone trying to take the fun out of everything. The bastards. ”

Now she just stood there, not talking. Then she lifted her phone and took another photo. Closer up. Mug shot.

“You want me to take my clothes off?” I asked.

“It’s too cold. All I’d get is a picture of goosebumps. ”

“True,” I said. I suddenly realized I was in the middle of a conversation with a rather attractive and mysterious woman. “Do I know you?” I asked.

I looked her over again. Inspecting. She noticed, did a little slow twirl. Front and back. I didn’t have a clue who she was.

She looked a little miffed. I figured I should say something. “Well, you’re not the queen of England, I know that. Too young, too beautiful. ” I was trying to pull it out of the trash can. She wasn’t young — forty something, fifty maybe — and not exactly classically beautiful, but she was truly pretty and absolutely most interesting. And I much preferred looking at her to staring down at the water.

She snapped another photo of me. I think I had a funny look on my face — man just thrown a lifeline, man shifting back from the brink from some abyss, man wandering alone in a wet world just given a blanket over his shoulders.

“What do you call that look? The one you just gave me. ”

“You call that happy?”

“That’s exactly what I was thinking when you came along with Stan Rogers. ”

“Sherbrooke. Nova Scotia or Quebec? I could never quite figure it out. ”

I wondered if we’d stand there and trade Stan Rogers lyrics for the rest of the morning. It would have been fine by me. I had nothing better to do. Take her through the Northwest Passage, tracing one warm line, through a land so wild and savage.

“What comes next?” she asked.

It had been a while since anyone had flirted with me. I was way out of practice.

“Um. That’s all you got?” she asked with a sharp edge in her voice. “You, an English major. Can’t come up with a line from James fucking Joyce or John fucking Milton?”

For a split second I thought she was actually angry with me. I didn’t know then that she was an actor, that she’d been in movies. I was beginning to think she was deranged. I was curious to see if there were weapons involved.

The weapon was the phone — lifted, pointed, snapped. “That’s a real crowd-pleaser. ‘Man Befuddled by Woman’ reads the headline. ”

“Headline, why headline?” I was wondering if she knew who I was.

“Just a phrase. Why does it matter?”

“It doesn’t,” I said. And I tried smiling. It had been a while. It hurt. I guess it showed.

I wanted to explain my lack of happy moments in my recent tenure on the planet but clammed up, shrugged instead.

She must have liked the shrug. “Buy me breakfast?” she asked.

“I’m broke,” I said. Paused. “Well, I think I have five bucks and a couple of quarters. But I’m waiting for the banks to open. ”

“They don’t like me. I don’t know what it is. They just don’t seem to want to deal with a guy like me. ”

“Okay, you want to play that card? I’ll buy you breakfast. ”

And so began a new chapter in my life. If I can stretch out the cinematic moment, I would say the sun came out, or it began to pour rain, or there were birds and flowers, quotes from Shakespeare or unison singing of “Fogarty’s Cove. ” But there was none of that.

She touched my arm once. And we walked in silence to the Bluenose Restaurant on Hollis Street. She ordered poached eggs and toast. I ordered scrambled eggs and bacon. And then all the waiters and waitresses and morning-weary breakfast patrons broke into song.

One of Canada’s finest storytellers, Lesley Choyce’s, latest — Broken Man on a Halifax Pier — is warm, witty and wise … an engaging and entertaining tale of trial and triumph that speaks to the soul and spirit of the Maritimes.

Broken Man on a Halifax Pier is a rollicking delight of a novel by Nova Scotia’s prolific chronicler of the clash between old ways and new ways, and how romance and reality cohabit for better or worse. Funny, heartbreaking, self-effacing, and spot-on, Broken Man shows why the voice of Lesley Choyce is straight-up iconic.

Choyce has crafted an impressive novel about the power of the sea, the power of community and the power of memory. And he also happens to have told a fine love story.

Charles may be broken, but his hometownand the ocean itself seem to live and breathe. A great vacation book, one to take to thebeach or to curl up with by the fireplace.