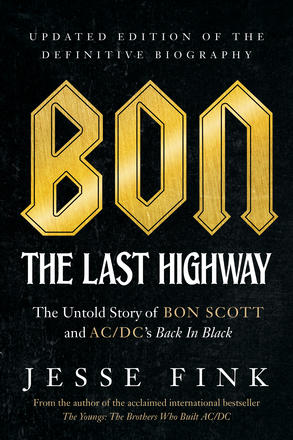 With unprecedented access to Bon’s lovers and newly unearthed documents, this updated edition contains a new introduction and more revelations about the singer’s death, dispelling once and for all the idea that Scott succumbed to acute alcohol poisoning on February 19, 1980.

Meticulously researched and packed with fresh information, Bon: The Last Highway is an affectionate, honest tribute to a titan of rock music.

Jesse Fink was born in London in 1973. He is the author of The Youngs: The Brothers Who Built AC/DC, which was released in more than 20 countries. Bon: The Last Highway is his fourth book. He divides his time between Sydney, Australia, and São Paulo, Brazil, with his wife and daughter.

“Fink delivers a page-turning account of the complicated character and significant contributions of Bon Scott that metalheads will devour. ” — Library Journal

“Wildly obsessive and doggedly researched, Bon: The Last Highway sifts through the myths for the truth of what happened to Bon Scott on his last day on earth. Jesse Fink, who seemingly spoke to everyone, moves through a complex web of misconceptions, biases, and addiction-marred memories, connecting narrative strands and hitherto unknown facts. As with Hank Williams — another iconic singer who died mysteriously in the backseat of a car on a lost highway — the story of Bon Scott and his tragic demise may never be accurately known, but this one-man investigation, born of respect for the truth and for Scott as a human being, blazes a new trail. ” — Joe Bonomo, author of AC/DC's Highway To Hell (33 1/3 Series)

“Very eye opening … Jesse Fink has done rock fans a great service. He dispels the many myths about how AC/DC's Bon Scott lived and died, and in doing so, brings to life one of the most influential, memorable, and complex figures in rock history. ” — Greg Renoff, author of Van Halen Rising

“It was an honour to be interviewed for this book. ” — Barry Bergman, AC/DC's publisher and ‘surrogate manager’