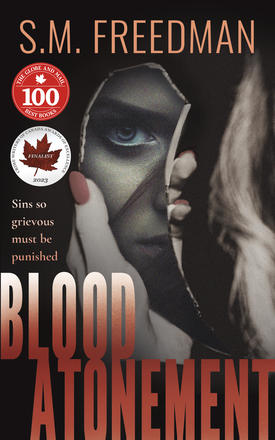 A GLOBE AND MAIL TOP 100 BEST BOOKS OF 2022
“Freedman grips right out of the gate with dual timeline narratives that weave together more and more tightly until they meld into a mind-bending twist of a climax. ” — LORETH ANNE WHITE, bestselling author of The Patient’s ... Read more

A GLOBE AND MAIL TOP 100 BEST BOOKS OF 2022
“Freedman grips right out of the gate with dual timeline narratives that weave together more and more tightly until they meld into a mind-bending twist of a climax. ” — LORETH ANNE WHITE, bestselling author of The Patient’s Secret
In a riveting psychological thriller for readers of Lisa Unger and Karin Slaughter, Grace’s healing solitude is shattered when she becomes a suspect in a gruesome series of murders.

Grace DeRoche escaped the fundamentalist Mormon compound of Brigham and worked to prosecute its leaders. But when loyalists, including her own family, commit mass suicide to avoid jail, Grace retreats into solitude. Racked with guilt and suffering from dissociative identity disorder brought on by childhood abuse, Grace’s life is fragmented and full of blind spots. Dissociative triggers are everywhere, and she never knows when an alter personality will take the reins.

When other Brigham escapees die under suspicious circumstances, Grace’s tenuous hold on reality crumbles. Notes left at each scene quote scripture and accuse the deceased of committing sins so grievous that atonement can only be achieved through the spilling of blood. As evidence mounts against her and one of her alter personalities becomes the prime suspect, Grace must determine if she’s a murderer … or the next victim.

S.M. Freedman is the author of The Faithful and Impact Winter. She studied at the American Academy of Dramatic Arts and worked as a private investigator on the not-so-mean streets of Vancouver, where she currently lives.

Grace was cleaning blood from her thighs when the police raided Brigham for the last time.

At first she paid little attention to the shouting outside the trailer window. She needed to finish what she was doing before her husband came home demanding dinner. She’d propped herself over the toilet, one hip wedged into the side of the sink and her back pressed against the shower door. Her legs shook, her hands trembled. Her brain was hot with fever and her good ear buzzed.

Someone pounded on the side of the trailer, causing the walls to rattle. She lurched backward and grabbed the edge of the sink to keep from falling. Bloody rags splatted on the floor.

The police. Now she heard the shouting. The crying. The chaos as children scattered into the forest.

Her dress hung from the hook by the sink, pale green with yellowed lace trim. But there was no time for her to get dressed. She grabbed a throw blanket from the foot of the bed and wrapped it around herself to cover her blood-soaked temple undergarments.

The world tipped sideways and slowly righted itself. Staggering forward, she somehow made it to the door and slammed a shoulder into it, unsticking the warped aluminum from its frame. She tumbled off balance down the outside stairs and would have fallen if her sister hadn’t caught her.

“Come on. ” Desiree grabbed her arm and pulled.

At the edge of the cornfield, reason or madness asserted itself.

Desiree spun to face her, eyes wide with panic. “What are you doing? We have to go. ”

Her sister’s hair was pulled into a classic roll on top of her head and braided down her back. She panted, her bosom pressed against the cotton of her high-collared dress. Pimples dotted her chin.

How long until Uncle G had a revelation about Desiree’s marriage? She was already a year older than Grace had been.

Desiree glanced toward the road. “Come on. They’re catching up!”

This was true. The beams of their flashlights danced like fireflies as the police approached. Their voices grew louder.

She felt Desiree’s panic, could feel it swell within her own chest. The urge to keep running was almost overwhelming. It’s what they’d been taught to do. They needed to protect their way of life, their chance at heaven, and their prophet.

But blood trickled down her legs. Again. And more than anything, she wanted a better life for her sister. She grabbed Desiree’s hands. Hers blazed with fever; Desiree’s felt like ice.

Realization and fear blossomed in Desiree’s eyes. She shook her head and tried to pull her hands free. “We shouldn’t. ”

Grace squeezed. “We must. ”

“But what about Father and Mother?”

Grace’s chest tightened with anxiety and guilt, but she shook her head. Too far down that path and she’d decide to stay. Then her only way out would be death. She opened her mouth, but nothing came out. Truth was so hard to speak. She’d been raised to be sweet, and the words burned like acid on her tongue. She almost gagged on the enormity of what escaped her lips.

“If I have to stay here any longer, I’ll die. And so will you. How long until you’re married?”

“You’re fourteen. Your revelation is coming any day now. ”

“Until Mother Rebecca joined the family. ”

“Was it just a game to you?” Grace asked.

The police drew closer, the beams from their flashlights weaving and flickering.

“I know you’re scared, but we can’t waste this chance. The others will be waiting for us. ”

Desiree licked her lips, bobbing her head up and down. “All right. If they’re really there, I’ll do it. ”

She wrapped an arm around her sister’s waist and together they ran along the edge of the cornfield. As Grace had predicted, the others were huddled beneath the scarecrow on the far end. But a quick head count told her only eight had made it. Grace rubbed a trembling hand across her brow. It came away wet. Her bones felt hollow, and she could barely hear over the ringing in her good ear.

No answer, just eight sets of eyes begging for her leadership.

“Oh, no! S-s—” Desiree’s jaw tightened and spittle flew from her mouth. Her stammer always got worse under stress. “S-s—” She shook her head. “We need to go look for her. ”

The police lights grew distant, but somewhere nearby men shouted. It sounded like Uncle Redd and maybe Joseph Barlow. They’d be rounding up the children, herding them to the forest.

“There’s no time! We have to go,” Rulon said. He was Uncle G’s sixth son, and her husband’s half-brother. They had the same blond hair and pale eyes, but her husband was salt to Rulon’s sugar.

Desiree spoke through her fingers. “We can’t just leave her. ”

“It won’t be for long,” Rulon said. “Once we tell our story, they’ll come back to rescue the rest. ”

Joseph Barlow spotted them and strode across the cornfield in their direction. “What are you doing there? All of you, to the forest!”

“Hey!” Barlow called after them.

They rolled like thunder across the fields and gravel, linked hand to hand. Grace’s legs trembled with exertion, threatening to collapse beneath her. But the others depended on her, so she pushed forward.

They made it to the main road with no sign of Sariah. Up close, the police looked terrifying. They moved in formation, wearing dark helmets and thick vests.

One by one she felt the others slow, paralyzed by the same fear that bloomed inside her own chest. This was their enemy in the flesh.

An officer stepped out of formation and pulled off his helmet. He had a shock of dark hair above a broad face. Their eyes met, and his arms opened as though in welcome.

She squeezed Desiree’s hand and pulled Tabby close. The girls trembled against her side, thin as sparrows.

She ran toward the officer’s open arms, and the children followed.

A wild ride exploring a fractured spirit and a community that must pay for their sins.

The Handmaid’s Tale meets All about Eve in this dark and disturbing thriller about a polygamist cult and the children who sought to escape it. At once riveting and heartbreaking, Freedman provides readers with both characters and an ending they won’t soon forget.

Past wounds and present danger twist together in this dark, propulsive tale that will grip you long into the night. A bloody good book with a heart-rattling end.

S. M. Freedman is a master of psychological suspense.

S. M. Freedman keeps the reader guessing and the pages turning in Blood Atonement, a dark and poignant psychological thriller/procedural with a cult backdrop. Freedman grips right out of the gate with dual timeline narratives that weave together more and more tightly until they meld into a mind-bending twist of a climax.

Other titles by S.M. Freedman