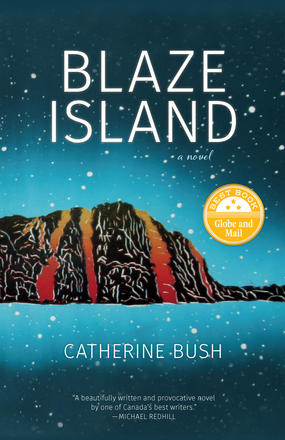 The time is now or an alternate near now, the world close to our own. A mammoth Category Five hurricane sweeps up the eastern ... Read more

The time is now or an alternate near now, the world close to our own. A mammoth Category Five hurricane sweeps up the eastern seaboard of North America, leaving devastation in its wake, its outer wings brushing over tiny Blaze Island in the North Atlantic.

Just as the storm disrupts the present, it stirs up the past: Miranda’s memories of growing up in an isolated, wind-swept cove and the events of long ago that her father will not allow her to speak of. In the aftermath of the storm, she finds herself in a world altered so quickly and so radically that she hardly knows what has happened.

Catherine Bush is the author of four novels, including the Canada Reads long-listed Accusation, the Trillium Award shortlisted Claire’s Head, and the national bestseller The Rules of Engagement — a New York Times Notable Book and a Los Angeles Times Best Book of the Year. Blaze Island will be her fifth novel.

Bush was recently a Fiction Meets Science Fellow at the HWK in Germany and is Associate Professor and Coordinator of the Creative Writing MFA at the University of Guelph. She lives in Toronto.

"Blaze Island is a fascinating and prescient story. With climate change as the backdrop, Catherine Bush’s lyrical portrait of the northern island landscape and a young woman’s passion for the land offers a frightening warning of how big business will surely adapt to the changes to benefit itself. Bush’s story is compelling — we watch the hurricane unfold, as only a brilliant writer can show us — and offers a moving and soulful primer for climate survival. "

"Blaze Island is a beautiful, far-seeing, and fiercely intelligent novel about the most critical question of our time — the weather systems that threaten to collapse us both from outside and from within. Catherine Bush writes like she is our last storm watcher, and Blaze Island, her urgent panoramic of our fragile world. Every sentence has the lush exactitude of a poem, and the book, as it stuns and pivots, the stampeding heart of a thriller. "

"Riveting and morally complex, Blaze Island is a beautiful, kaleidoscopic work that offers a resounding reply to the question of how literature might wrestle with the deepest threat facing the planet, anthropogenic climate change. In the absence of saviours and easy consolation, what Bush has created is an allegory of hubris and humility and an exhilarating space in which to re-imagine multi-species relationships and stories. "

"Bush’s Blaze Island is a fierce box of wind. Open its cover and you feel at once the fury of the weather to come, the future of the planet in novel form. "

"In the famous end of The Tempest, Prospero asks that the audience free him and the other characters from the dream of the play. Blaze Island amounts to a similar request. To deny or ignore our changing world is to stay willfully dreaming. "

"Catherine Bush's cast of characters roam Blaze Island after a storm of mythical strength, amid a welter of blown off roofs, smashed windows, sunken vehicles, blazing desire and destruction. Bush's prose is a lightning storm in the dark of climate crisis, gothic, forceful and beautifully intimate. Here is the majesty and awe of unleashed nature and we are caught in the grip. Swept away. This novel is sublime. "

"Climate change is both an external and internal phenomenon in Catherine Bush's brilliant new novel, Blaze Island. Set on an island off the coast of Newfoundland, its cast of characters includes a renegade climate scientist and his young daughter Miranda. They are self-made castaways who can't get far enough away from what's chasing them: memories of loss, threats of scandal, and the increasingly dangerous weather itself. The novel is an ever-moving storm of emotion and politics that unfolds under churning skies and life-or-death stakes. Miranda, a young woman on the verge of adulthood and independence, is a marvellous creation and a portrait of a soul in progress. Bush brings together a complicated cast of three-dimensional men and women, all fighting with and against each other in the name of saving the planet . .. or making a buck. A tale of greed, hope, and love, it is a beautifully written and provocative novel by one of Canada's best writers. "

Other titles by Catherine Bush