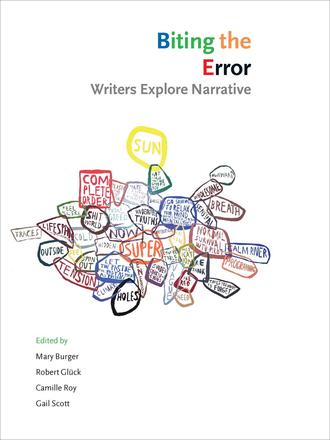 What is the best way to tell a story? In this anthology, the first-ever collection of essays by innovative, cutting-edge writers on the theme of narration, forty of the continent's top experimental writers describe their engagement with language, storytelling and the world. ... Read more

Gail Scott is an experimental novelist. The Obituary (New York, Nightboat, 2012; Coach House, 2010), a ghost story set in a Montreal triplex, was a 2011 finalist for Le Grand Prix du Livre de la Ville de Montreal. Other novels include My Paris (Dalkey Archive), about a sad diarist in conversation with Gertrude Stein and Walter Benjamin in late 20th century Paris, Main Brides and Heroine. Spare Parts Plus 2 is a collection of stories and manifestoes. Essays are collected in Spaces Like Stairs and la theorie, un dimanche (translated as Sunday Theory from Belladonna, NY, 2013). Scott's translation of Michael Delisle's Le D'asarroi du matelot was shortlisted for the Governor General's award in 2001. Scott co-founded the critical French-language journal Spirale'(Montreal) and is co-editor of the New Narrative anthology: Biting the Error: Writers Explore Narrative (Toronto: Coach House, 2004). She is currently completing a memoir based in Lower Manhattan during the early Obama years. Gail currently lives in Montreal.

Robert Glück is the author of nine books of poetry and fiction. His books include Jack the Modernist, Margery Kemp, Denny Smith, Elements of a Coffee Service and Reader. Glück was an associate editor at Lapis Press, co-director of Small Press Traffic Literary Center and director of the Poetry Center at San Francisco State, where he teaches creative writing.

Camille Roy is a writer and performer of fiction, poetry and plays. Her books include SWARM, The Rosy Medallions and Cold Heaven. She lives in San Francisco and teaches creative writing privately and at San Francisco State University.