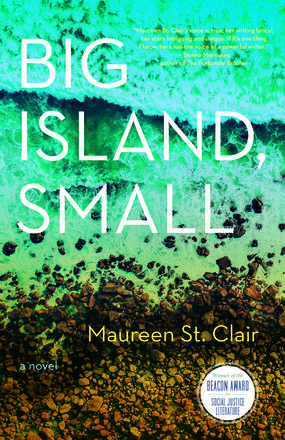 Sola is confused the first time she sees Judith, a fair skinned woman with dreadlocks dancing to reggae music. Meeting her gaze, Judith thinks Sola is judging her for appropriating Black culture. A few days later, up against an interlocking fence, Judith kisses Sola. Onlookers hurl stones and racial and gay slurs. Thus begins the complicated friendship between Judith and Sola who live in between the land they were born, the Caribbean, and the land where they presently live, North America.

Winner of the 2016 Beacon Award for Social Justice Literature and the 2015 Atlantic Writer’s Competition, Big Island, Small is a story of intimacy and friendship between two Caribbean/Canadian women with similar, yet vastly different, backgrounds who must dismantle their assumptions and biases around race, class, gender and sexuality in order to make amends with violent pasts, release shame, find joy and reconnect with themselves and each other.

Maureen St. Clair is an artist, peace educator, activist and writer. Born and raised in Canada, with Grenadian citizenship, Maureen has lived in Grenada, West Indies, for twenty-five years with her Grenadian partner Theo and daughter Maya. Maureen is known throughout the Caribbean and internationally for her vibrant, women-positive paintings inspired by her work with women and youth. She is also an associate of Coady International Institute where she facilitates programs in community peacebuilding and global community leadership.

“St. Clair’s debut novel makes a brave entrance galloping on the scene like her morning sun. The language is real and engaging, addressing social ills like the heat curling our necks. She enters the consciousness of her characters with such skill, channeling their voices with a delicious sweet rawness — it’s like biting into a ripe cashew nut fruit. Fresh. Honest. Rootsy!”

“What drew me into Maureen St. Clair’s novel: her fiery lyricism and bang-on rhythmic dialogue, a capturing of people and places in deft graceful brushstrokes, and the bravery to delve into the darker aspects of the heart. Big Island, Small is an absorbing work of honesty and originality. ”

— Dana Mills Author of Someone Somewhere

“A deeply sensitive and engaging novel. Maureen St Clair writes the lives and relationships of her characters with rare delicacy and perception. Well worth reading. ”

“The power of this novel lies in its unforgettable characters.   Maureen St. Clair effortlessly writes Judith and Sola’s complicated friendship into existence, shaped by intertwined personal and structural histories.   Relationships are woven in surprising and lovely ways, filled with honesty and vulnerability. ”

“Maureen St. Clair is a fearless new kid on the Can-Lit block. Her writing is both lyrical and passionate as she pens this unique story of two young women longing for love, and a sense of belonging in a world riddled with judgements. Her voice is true, her writing lyrical, her story intriguing and unique. If it’s one thing I know, here lies the voice of a powerful writer. ”

“Big Island, Small turns on its head familiar dualities: white/black, gay/straight, big/small.   In the capable hands of the author the familiarity of these dualisms are used not to lock main characters in but rather to shed light on the complexity of identities. The even, strategic arrangement of characters and setting is as rich and striking as the Caribbean foliage encircling an unfolding story that will stay with you long after  the end.   Big Island, Small could only come from the heart and mind of someone like its author, Maureen St. Clair.   If you don’t know who she is, don’t worry; it’s only a matter of time. ”

— Sobaz Benjamin Founder, Executive Director: In My Own Voice (iMOVe) Arts Association and Director of NFB Documentary ‘Race is a Four-Letter Word’

“I am delighted to see an author telling a story of two young women, coming of age, in such a visual way. The story draws you into a culture and existence that truly exists, but few dare tackle in Grenadian literature. ”