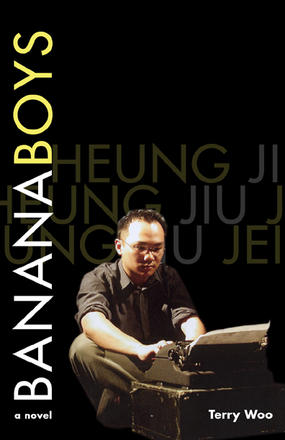 What is the nature of Banana? To Luke, Dave, Mike, and Sheldon, it’s a curious predicament brought on by upbringing — growing up yellow on the outside, white on the inside. They’re together to pay their last respects to Rick, the one Banana Boy who seemed to have it all, ... Read more

What is the nature of Banana? To Luke, Dave, Mike, and Sheldon, it’s a curious predicament brought on by upbringing — growing up yellow on the outside, white on the inside. They’re together to pay their last respects to Rick, the one Banana Boy who seemed to have it all, but was found dead in his living room, apparently of suicide.

The tragedy that has reunited the Banana Boys becomes the point from which we are introduced to the intertwined stories of a group of young friends caught in cultural and social limbo. Not really Chinese and not quite Canadian, the Banana Boys stumble through situations, incidents and interactions that ultimately explore the nature of identity and reveal the possibilities each character has within himself.

Peppered with piercing insights and laced with comic anecdotes, Banana Boys provides unforgettable texture to the ordinary — and extraordinary — tribulations of being twentysomething, male, and Asian in Canada.

Terry Woo is a Banana Boy. Born in Hamilton, Ontario, he has drifted from Toronto, Seattle, New York and San Francisco. He graduated from the University of Waterloo, in Waterloo, Ontario with a degree in Systems Design Engineering, and one in Psychology. He enjoys hockey, jazz, baking lasagna, spinning breakbeats and trance breaks, nice beaches, California and imbibing mass quantities of Molson’s products. His first novel, Banana Boys, was shortlisted for the 1999 Asian Canadian Writers Workshop (ACWW) Emerging Writers Award. In the fall of 2004, a theatre adaption of the novel was produced by the fu-GEN Asian Canadian theatre company.

“Woo’s perceptions of this subculture of men are self-deprecating, edgy, and triumphant, rendering Banana Boys a must-read for all Asian Americans. ”

“Banana Boys is about Canadian-born hosers of Chinese descent and the minute details of their relationships with their loved ones … These are characters I’ve met in real life, but until now, never in the pop media. ”

“The prose is lively and often hilarious, and the pace is as up-to-the-minute as you’d expect … In delineating the banana boys’ families, Woo provides us with the complex history of the Chinese in Canada in microcosm. ”

“Woo’s characters, with all their quirks, quickly become endearing … they are the kinds of Asians that one can only hope to start seeing in popular culture. God knows that we’re sick and tired of being portrayed as goons and chopsockey heroes. ”