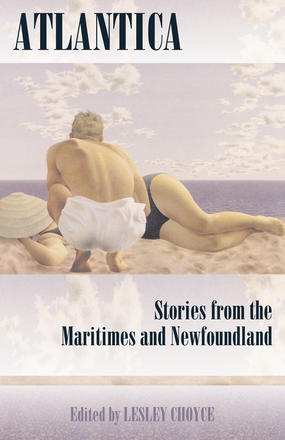 The world has taken notice. From Alistair MacLeod's recent IMPAC literary award, through movies based on the work of David Adams Richards and Sheldon Currie, to the epic television series based on the work of Bernice Morgan, the international community has soundly acknowledged the critical and commercial success of Atlantic writers.

Atlantica is the first major anthology of Atlantic fiction since Best Maritime Short Stories was published in 1988 and showcases stories by some of Canada's most exciting authors — established, newly popular, and emerging. Given the regional penchant for storytelling, it's not surprising that the Maritimes and Newfoundland produce a continuous stream of spellbinding writers.

Among the stories in Atlantica are Anne Simpson's Journey Prize-winning "Dreaming Snow," Carol Bruneau's "The Tarot Reader," "Batter My Heart" by Lynn Coady, Bernice Morgan's "Poems in a Cold Climate" "The Train Family" by Joan Clark, "Missing Notes" by David Helwig, "The Party" by Herb Curtis and "Clearances" by Alistair MacLeod. Readers from "away" will recognize Sheldon Currie's hilariously gothic tale "The Glace Bay Miner's Museum" as the basis of Helena Bonham Carter's acclaimed movie Margaret's Museum. Some stories have been excerpted from novels, including David Adams Richards's The Bay of Love and Sorrows, Wayne Johnston's The Colony of Unrequited Dreams, John Steffler's The Afterlife of George Cartwright, and Donna Morrissey's Kit's Law.

Remarkably diverse in age, style, and cultural identity, the writers in this anthology raise a common voice that defines Atlantic Canada. Each with an individual approach to language and writing, they offer a collective view of the east, conscious of tradition but not confined by it. By turns funny, poignant and pensive, the stories in Atlantica firmly place eastern Canadian culture on the world map of literature.

Alistair MacLeod (b. 1936) was born in Saskatchewan, grew up on Cape Breton Island, and spent his summers there while teaching creative writing at the University of Windsor. One of the world's foremost story writers, MacLeod has received many awards, including the IMPAC Dublin Literary Award for his first novel, No Great Mischief (McClelland & Stewart, 1999). "Clearances" is included in Island: The Collected Stories of Alistair MacLeod (McClelland & Stewart, 2000).

Joan Clark was born in Liverpool, Nova Scotia. She writes novels, short fiction, and novels for young adults. She has won numerous awards, including the Marian Engel Award, the Canadian Authors' Association Literary Award, the Mr. Christie Award, and the Jeffrey Bilson Award. Her most recent novel is Latitudes of Melt (2000). She lives in St. John's, Newfoundland.

Wayne Johnston was born and raised in Goulds, Newfoundland. He obtained a BA in English from Memorial University and worked as a reporter for the St. John's Daily News before deciding to devote himself full-time to writing. Since then, Johnston has written seven books. His novels The Colony of Unrequited Dreams and The Navigator of New York spent extended periods of time on bestseller lists in Canada and have been published in the US, Britain, Germany, Holland, China, and Spain. Colony was identified by The Globe and Mail as one of the 100 most important Canadian books ever published. Johnston divides his time between Toronto and Roanoke, Virginia, where he has held the Distinguished Chair in Creative Writing at Hollins University since 2004.

Born in Halifax, Carol Bruneau combines a career in fiction writing with teaching writing, and is a part time faculty member of the Nova Scotia College of Art and Design in Halifax, where she lives with her husband and their three children. Her most recent publication is the novel Berth (2005).

Maureen Hull was born in Cape Breton, Nova Scotia. She worked in the costume department of the Neptune Theatre in Halifax and now when not writing, she fishes lobster with her husband. The have two daughters.

David Helwig (1938-2018) grew up in Ontario and lived in Belfast, Prince Edward Island. He founded the Best Canadian Stories series, and he was the author of sixteen books of fiction and numerous works of non-fiction, including poetry, memoir, documentary and translation. His most recent work of fiction was Close to the Fire (Goose Lane, 1999), a novella, and the novel, The Time of Her Life (Goose Lane, 2000). "Missing Notes" appeared in ArtsAtlantic (61) and was selected for 98: Best Canadian Stories.

Herb Curtis was raised near Blackville, on the Miramichi, and now lives in Fredericton, New Brunswick. His collection of short fiction, Luther Corhern's Salmon Camp Chronicles (1999), was nominated for the Stephen Leacock Award. The Last Tasmanian (1991, 2001), one of four novels, garnered the Thomas Head Raddall Atlantic Fiction Award and was a regional finalist for the Commonwealth Writers' Prize.

Donna Morrissey (b. 1956) grew up in the isolated western Newfoundland community of The Beaches, where, she says, "There were twelve families and we didn't talk to six of them." She studied at Memorial University in St. John's, lived in various other parts of Canada, and makes her home in Halifax. Her first novel, Kit's Law (Penguin, 1999), the source of "Grieving Nan," won the National Booksellers Association Libris Award and garnered international praise.

J. J. Steinfeld lives in Charlottetown, Prince Edward Island. His work has received many awards, including the 1990 Creative Writing Award from the Toronto Jewish Congress Book Committee. His most recent collections are Would You Hide Me? (GP, 2003) and Anton Chekhov Was Never in Charlottetown.

Budge Wilson (b. 1927) was born in Halifax, Nova Scotia, and lived in Kingston, Ontario, before moving back to North West Cove, Nova Scotia. A former commercial artist and photographer, she has written more than twenty books, many of them for children and young adults; her awards include the Ann Connor Brimer Award for children's literature. "Mr. Manuel Jenkins" is included in her story collecton The Leaving (Anansi, 1991).

Helen Fogwill Porter #&40;b. 1939) was born in Newfoundland and lives in St. John's. "One Saturday#&34; appeared in The Pottersfield Portfolio (1983) and was included in her collection, A Long and Lonely Ride (Breakwater, 1991#&41;. A memoir, Below the Bridge, appeared in 1980 (Breakwater#&41;, and she was honoured with the Newfoundland and Labrador Lifetime Acheivement Award in 1993.

Wayne Curtis was born in Keenan, New Brunswick, on the banks of the Miramichi River. He was educated at the local schoolhouse and at St. Thomas University. He started writing prose in the late 1960s. His essays have appeared in the Globe and Mail, Outdoor Canada, Fly Fishermen, and the Atlantic Salmon Journal.

David Adams Richards studied English from 1970 to 1973, when he left university to become a full-time writer. Although known mainly as a novelist, he has written poetry, short stories, non-fiction, screenplays, and biography. He has won many important awards, including the Governor General's Award both for fiction (Nights Below Station Street, M&S, 1988) and for non-fiction (Lines on the Water, Doubleday, 1998). Mercy Among the Children (Doubleday) was co-winner of the Giller Prize in 2000. In 1993, he was awarded an honorary doctorate by STU.

Joan Baxter is a Nova Scotian author, journalist and anthropologist who now makes her home in Colchester County. For more than two decades Joan lived with her family in Africa, reporting for the BBC World Service, CBC Radio, Associated Press, Toronto Star, The Chronicle Herald and a host of other media.

Sheldon Currie (b. 1934), a native of Reserve, Cape Breton, and a resident of Antigonish, Nova Scotia, taught for many years at St. Francis Xavier University. "The Glace Bay Miner's Museum" first appeared in the collection, The Glace Bay Miner's Museum (Deluge, 1979). It was the basis of the feature film, Margaret's Museum, which Currie subsequently rewrote as a novella, and it is included in the collection, The Story So Far (Breton Books, 1997).

"The truffles of the fiction chocolate box . . . offer[s] established stars and newer lights . . . In this collection, story is not only essential, but both profound and prismatic . . . if you like well-wrought stories, you will find plenty here to savour." — Globe and Mail

"The editor draws upon some of the best known names in fiction . . . A great gift for the brooding, serious fiction lover in the family, and those too who simply enjoy a good story." — Newfoundland Herald

"The editor draws upon some of the best known names in fiction . . . A great gift for the brooding, serious fiction lover in the family, and those too who simply enjoy a good story." — Newfoundland Herald

"The truffles of the fiction chocolate box . . . offer[s] established stars and newer lights . . . In this collection, story is not only essential, but both profound and prismatic . . . if you like well-wrought stories, you will find plenty here to savour." — Globe and Mail

Other titles by Joan Clark

Other titles by Wayne Johnston

Other titles by Carol Bruneau

Other titles by Maureen Hull

Other titles by David Helwig

Other titles by Herb Curtis

Other titles by Lynn Coady

Other titles by JJ Steinfeld

Other titles by Wayne Curtis

Other titles by Bernice Morgan

Other titles by Joan Baxter