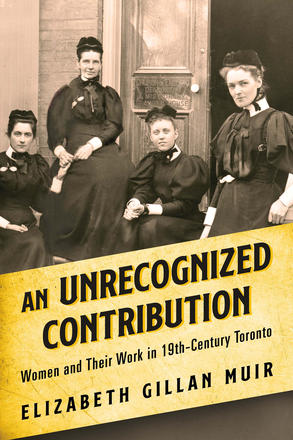 A treasure trove of incredible lives lived.
— RICK MERCER, comedian and author
Muir sets out to restore the faces of women who worked and struggled in nineteenth-century Toronto. A fascinating read.
— WARREN CLEMENTS, author and publisher
Emphasizes the enormously influential ... Read more

A treasure trove of incredible lives lived.
— RICK MERCER, comedian and author
Muir sets out to restore the faces of women who worked and struggled in nineteenth-century Toronto. A fascinating read.
— WARREN CLEMENTS, author and publisher
Emphasizes the enormously influential role women had in laying the groundwork for life in the city today.
— DR. ROSE A. DYSON, author of Mind Abuse: Media Violence and Its Threat to Democracy
Women in nineteenth-century Toronto were integral to the life of the growing city. They contributed to the city’s commerce and were owners of stores, factories, brickyards, market gardens, hotels, and taverns; as musicians, painters, and writers, they were a large part of the city’s cultural life; and as nurses, doctors, religious workers, and activists, they strengthened the city’s safety net for those who were most in need.
Their stories are told in this wide-ranging collection of biographies, the result of Muir’s research on early street directories and city histories, personal diaries, and other historical works. Muir references over four hundred women, many of whom are discussed in detail, and describes the work they undertook during a period of great change for Toronto.

Elizabeth Gillan Muir has taught Canadian history at the University of Waterloo and Emmanuel College at the University of Toronto. She has written extensively about women in Upper Canada and the role of women in the Christian Church. Elizabeth holds degrees from Queen’s University, the Harvard Business School, and a Ph.D. from McGill University. She lives in Toronto.

A useful chronicle to anyone who wishes to explore the early underpinnings to the growth and prosperity of the City of Toronto. It provides a uniquely original resource that uncovers the vital contributions made by women in the establishment of many institutions we now value and consider essential to our daily lives.

Elizabeth Muir sets out to restore the faces of women who worked and struggled in nineteenth-century Toronto, some famous and some not. Her research turns up surprises every few pages, introducing us to songwriters, reformers, owners of brickyards and corset factories, and others whose presence is still felt in the names of Toronto streets. A fascinating read.

An Unrecognized Contribution is a treasure trove of incredible lives lived. Elizabeth Gillan Muir introduces us to an endless cast of women whose lives were marked by incredible bravery, innovation, and achievement against all odds. In these pages lie a hundred movies waiting to be made.