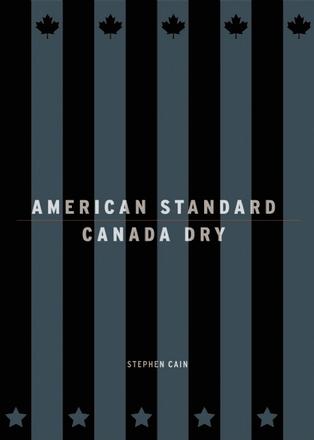 From the Howl-like opening rant about the militarism of the US to the satirical ‘History ... Read more

From the Howl-like opening rant about the militarism of the US to the satirical ‘History of Canada,’ this collection interrogates nationalism and cultural identity on both sides of the 49th parallel and attempts to show that Auden was wrong:poetry can make things happen.

Deftly oscillating between vitriolic verse and humour, the poems in American Standard/Canada Dry interrogate poetics, nationalism and Tim Hortons as thoroughly as a burly border avant-guard; they’re your passport to the land of a new political poetry.

‘One of the most interesting and engaged of Toronto’s young avants, [Cain] places himself carefully and deliberately in his surroundings and readings, and slips in and out of context as he goes. ’

Stephen Cain (b.1970) is the author of dyslexicon (Coach House, 1999) and Torontology (ECW, 2001). His sound poetry can be heard on Carnivocal (Red Deer, 1999) and his concrete poetry has appeared internationally. He lives in Toronto where he is a literary editor at the Queen Street Quarterly and a fiction editor at Insomniac Press.

Other titles by Stephen Cain