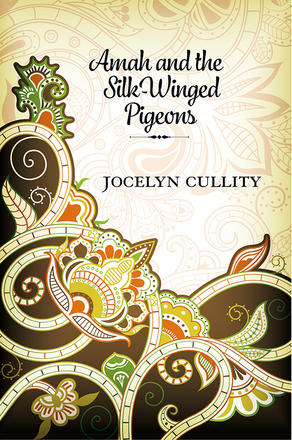 Lucknow in 1856 is the most opulent city in India. If the English take it over, the royal family and centuries of rich, cosmopolitan culture will disappear. Amah, personal bodyguard to the King, wants to make sure this doesn’t happen. Ex-Queen, Hazrat Mahal, has the money to fortify against the English. Both women are daughters of African slaves who have grown in wealth and power thanks to the reign of the Indian royal family in Lucknow. The English are a small number, compared to the native population in the city, but Lucknow has never known war. When the women decide to take on the English colonists who declare rule, what will be the ultimate price of the women’s loyalty to the royal family and to the place they’ve grown to love?

Amah and the Silk-Winged Pigeons draws on the lost histories of the women descended from African slaves who resisted English rule during the 1857 uprising in Lucknow, India. The book is about the event that triggered Queen Victoria’s reign in India for almost a century, and illuminates new and important female, Muslim perspectives on what has been called the first war of Indian independence.

Jocelyn Cullity’s English family lived in India for five generations. When she was fourteen, she transcribed her great-great-great aunt’s diary about being held hostage for five months during the 1857 “Indian Mutiny” in the city of Lucknow— and the event stuck with her. Based on a true story of colonial events in Lucknow, Cullity’s debut novel, Amah and the Silk-winged Pigeons, illustrates for the first time the lost history of the Afro-Indian, Muslim women who fought against the English hoping to save the city they loved. Her short stories and nonfiction have been published in many journals including The Writer’s Chronicle, Blackbird, Hayden’s Ferry Review, Everywhere Stories: Short Fiction from a Small Planet, and Minerva Rising. Her documentary film about young women in China, Going to the Sea, aired on The Women’s Television Network, The Knowledge Network, and won the Lester B. Pearson Award for International Development at the REEL Women’s Film Festival in Canada. She was born in Australia, grew up north of Toronto, Canada, and has lived for periods of time in both India and England. She teaches in the BFA in Creative Writing program at Truman State University, and currenly lives in Columbia, Missouri.

"Jocelyn Cullity's Amah and the Silk-Winged Pigeons highlights the lost history of the women descended from African slaves who fought so valiantly to save Lucknow during the famous 1857 resistance to English rule. Cullity--whose English family lived in India for five generations--infuses the grand narrative sweep of her story with poetic elegance, and succeeds in adjusting our lens on the past to illuminate a crucial part of Indian history. "

"This book goes straight into the category of good historical fiction that brings the past vividly alive. Inspired by her own family's history, Jocelyn Cullity brings style and flair to an episode of the Great Uprising in India. Beautifully written and deeply researched, this debut novel will hold and intrigue its readers. Warmly recommended. "

"Amah and the Silk-Winged Pigeons, based on real people and events, is a novel prodigiously researched, in which the research is so thoroughly composted into character that we lose ourselves in the rich settings and these imagined lives. A wonderful read. "

"I admire the lucid, fluent prose and shimmering atmosphere of this novel, which in many ways recalls the best of E. M. Forster. Cullity's setting is redolent of Indian life, its tastes and smells, its colors and textures. She handles the themes of empire and cultural conflict with huge tact and clarity. Her storytelling is first-rate. Jocelyn Cullity is a fresh voice, and Amah and the Silk-Winged Pigeons is a memorable achievement. "

Other titles by Jocelyn Cullity