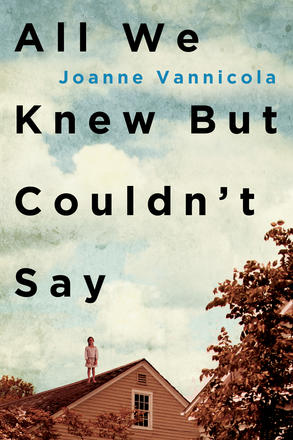 All We Knew But Couldn't Say

All We Knew But Couldn't Say

Finalist for the 2020 Kobo Emerging Writer Prize in Nonfiction

Joanne Vannicola grew up in a violent home with a physically abusive father and a mother who had no sexual boundaries.

After being pressured to leave home at fourteen, and after fifteen years of estrangement, Joanne ... Read more

Finalist for the 2020 Kobo Emerging Writer Prize in Nonfiction

Joanne Vannicola grew up in a violent home with a physically abusive father and a mother who had no sexual boundaries.

After being pressured to leave home at fourteen, and after fifteen years of estrangement, Joanne learns that her mother is dying. Compelled to reconnect, she visits with her, unearthing a trove of devastating secrets.

Joanne relates her journey from child performer to Emmy Award–winning actor, from hiding in the closet to embracing her own sexuality, from conflicted daughter and sibling to independent woman. All We Knew But Couldn’t Say is a testament to survival, love, and the belief that it is possible to love the broken, and to love fully, even with a broken heart.

Joanne Vannicola is an Emmy Award–winning actor who has worked in theatre, film, and television. A fierce advocate for LGBTQ+ rights, she lives in Toronto.

I never know what condition she’ll be in when I arrive at the hospital — if she’ll be lucid, rambling, awake, sleeping, in an altered state, or maybe even gone. Dead.

I wait, though, finishing my cigarette outside, squatting on the ground. My fingertips yellowed with nicotine. The skin chewed. The sky scattered and uncertain as if the spring sun might disappear and a storm might crash in. I exhale and stroke an exposed patch of grass as if it were the fur of a sleeping cat.

I squint, shield my eyes, and look up from her stiletto heels to her bold red lips. Everything perfect and in place.

“I’m sorry,” she says softly before walking away.

I stand up, squash my cigarette with my shoe, cross the street, and go through the revolving glass doors of Princess Margaret, Toronto’s renowned cancer hospital. I wait for the elevator, pop peppermint gum into my mouth, fish my shades from my pocket, and push them on, covering the dark circles around my eyes.

The elevator is crammed with gowned patients clutching their IV poles, hospital staff, and fellow visitors. Some are here for those in the beginning stages of the disease, the newly diagnosed who are in treatment or having surgery. Then there are people like me, the dishevelled and overtired, the ones on constant duty, hurrying to the bathroom or stealing away for a quick smoke, afraid to miss the end.

It takes forever to get to the seventeenth floor: the palliative care ward. My sisters are outside our mother’s room talking in whispers. My brother, Diego, is at home sleeping. We’re on rotating shifts. My sisters, Sadie and Lou, have travelled from Montreal and Vancouver to say their goodbyes; yes, even Sadie, who was taken by the Children’s Aid so many years ago, the day the rest of us were inexplicably left behind.

Mother slips in and out of consciousness, almost in a coma, her body bruised from multiple needles and the morphine drip. Her eyes are glassy, hollow. She is uncommunicative, the way my sisters like it. They don’t want to talk or listen; they have never believed a word she said anyway. Lou refused to even come to Toronto unless I was certain Mother was dying.

It was winter when my mother was admitted. I didn’t know then how long was left. Weeks? Months? I only knew she was declining, and unlike my sisters, I had questions that neededanswering. I walk into her room. Her bare feet are exposed, the skin like cracked mud under a hot sun. I should apply cream but am afraid to touch them. I am thirty-three years old, but my insides still revolt when I get close to her. The need to feel separate is so big, so old. So immediate.

I ignore her parched feet, busying myself with the messy counter beside her bed while I formulate the first question.

“Do you want to finally talk?” I stare at her.

“Not yet,” she says and stares back.

I wipe the counter and rearrange the clutter: the box of Kleenex, the water jug, three Styrofoam cups, juice from breakfast. I throw out used tissues. I try again.

“Because I had to,” she answers. She grabs the remote and turns on the extendable tiny television that stretches out from the wall like the arm of a crane. “The new kids are so good,” she says after finding a figure-skating competition. “That boy Sandhu, he can dance too. …”

“But why? Was it because you were pregnant with Sadie?”

She pauses as if the answer is lost to her. I’ve seen it before, this vacancy, how she fumbles, makes things up she doesn’t know, avoids reality.

“I think so. …” Mother says, her voice stuck somewhere in her throat.

“You think so or you know so?”

“I don’t know. … I … well, your grandfather wanted me to marry your father. ” She turns off the television and shoves it away from her bed.

I actually know the real story, but not from my mother. From Diego, who told me years ago, after he had gone with Mother to a therapy session.

Mother was the youngest girl out of seven children: the “chosen” one, raped by her father. She told people, but no one believed her. I did. The moment Diego told me, I knew it was true. It was the only thing that made sense. A piece of her was broken long before any of us came along.

“And I loved your father,” she interjects before I can say anything more. “I loved him. Isn’t that enough?” She covers herself with the thin green hospital blanket.

When I was young, I obsessively asked her why she married my dad. He was terrifying, and even at the age of eight, I couldn’t understand why she’d married him.

She would always say the same thing: “Because I loved him. ”Then she would throw up her arms to shut me up, as if she thought I could believe her. It was the most insane thing I had ever heard.

She interrupts my thoughts. “I want to speak with all my children. ” Her demeanour is imperious. “I forgive you all. ”

“What did you say?” I turn to her, feeling nauseous, dizzy almost. After everything she has done, she forgives us?

She stares at me without answering, fidgets with her bedding. Her voice changes, becomes childlike. “Do you forgive me?”

I leave then, rush out, trying to stop the flood of memories. The dam breaks and I spend the night spinning backward, through my father’s violence and my mother’s collusion. And through something else, something hard to accept or talk about even now: how my mother touched me, and how I knew, even when I was a little girl, that it was wrong.

But I go back the next day, and she stares at me vulnerably from her bed. “I’m afraid of losing my hair. ”

“I don’t know if I can handle seeing it fall out in chunks. I’m scared. ”

Stark. Unflinchingly honest and filled with a type of determination that is seen in LGBTQ people who want more than just survival.

I am completely gutted by reading Joanne's beautifully penned heart-wrenching memoir. When every important relationship that shapes us is broken and lacking in nurturing love, it stands as a testament to the power of becoming whole. Raw, unflinching, brave and important, it makes me grateful to know that a voice with this power and honesty is sharing her truth with us all.

What you need to know about All We Knew But Couldn’t Say is how brilliantly Joanne Vannicola says what couldn’t be said. She writes about mayhem and emotional violence with such precision that it’s like becoming mesmerized by a tornado moving directly towards you. Becoming an actor may have been Joanne Vannicola’s first step in avoiding the path of destructive forces heading her way, but it’s her writing that feels like a storm contained. This is a story you won’t soon forget.

This frank, sometimes harrowing, always inspiring memoir should be mandatory reading for all — for those afraid of being true to themselves or anyone who needs a hero that demonstrates what personal courage and determination can do.

Joanne Vannicola weaves a compelling narrative about hardship, survival, and resilience that reminds all of us about the enduring importance of forgiveness, family acceptance, and love.

Jo Vannicola’s memoir is shocking, upsetting and occasionally graphic, yet what sets it apart from other similar accounts is an underlying sense of optimism. Out of despair there has emerged a beautifully written account, where the author has not only come through the tribulations of her early life, but become a leading voice for the overlooked and the marginalized. I cannot recommend it enough.

A story fit for this time and the landscape of our culture. Incredibly raw, moving, and honest. Joanne has survived so much and come out triumphant. A book worth reading.

In this moving memoir, Joanne Vannicola writes herself — and so many of us who have experienced oppression and trauma —onto the page. As a writer, I enjoyed her beautiful, well-paced and evocative storytelling. As a therapist and survivor, I found myself pausing and nodding as she articulated so well her deep and layered understandings of trauma and marginalization. Throughout, I found myself rooting for and cheering on the young girl, actor, activist, and woman of this story.

Joanne writes the way she lives, with heart and hope and honesty. A must read.

The book has a cinematic feel to it. ..All We Knew But Couldn’t Say is a story about someone figuring out their own identity and claiming it, pushing past layers of abuse, confusion and cultural resistance to define themselves as non-binary long before there was a word for it.

What skill and mastery Vannicola employs, particularly in the face of her most brutal moments, which others may not have survived. ..Vannicola does this work with grace, skill and grit, which makes this novel truly one of a time when it is most needed.