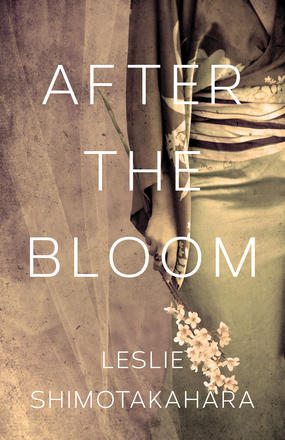 Lily Takemitsu goes missing from her home in Toronto one luminous summer morning in the mid-1980s. Her daughter, Rita, knows her mother has a history of dissociation and memory problems, which have led her to wander off before. But never has she stayed away so long. Unconvinced the police are taking the case seriously, Rita begins to carry out her own investigation. In the course of searching for her mom, she is forced to confront a labyrinth of secrets surrounding the family’s internment at a camp in the California desert during the Second World War, their postwar immigration to Toronto, and the father she has never known.

Epic in scope, intimate in style, After the Bloom blurs between the present and the ever-present past, beautifully depicting one family’s struggle to face the darker side of its history and find some form of redemption.

Leslie Shimotakahara holds a Ph.D. in English from Brown University. Her memoir, The Reading List, won the Canada-Japan Literary Award in 2012, and her fiction has been shortlisted for the K.M. Hunter Artist Award. Leslie lives in Toronto.

A compelling tale of hearts and minds caught in the tumult of history, memory and love, across generations. A sweeping page-turner.

Presents an affecting inside view of what Japanese-Americans endured, both within the camps and afterward.

Leslie Shimotakahara uses bold strokes of unflinching and honest prose to paint a landscape of beauty and brutality in her compelling debut novel After the Bloom as she tells one woman’s journey and a daughter’s desire for truth. Like evocative cherry blossoms, Shimotakahara’s powerful words float from page to page, enticing the reader to take courageous steps through the tragedy and oppression of an internment camp. With sharp insight and grace, she has created a narrative full of emotional impact and vivid characters. After the Bloom is deeply moving and enthralling with scenes that will remain with readers long after the ending. This book is just the beginning of a brilliant career for this captivating new voice.

A masterful and deeply moving tale of mothers and daughters, of hidden histories and repressed memories, of loss and of love, After the Bloom is a potent reminder of the legacy of the internment and the power of reclaiming the past.

After the Bloom offers characters of exacting specificity, ones who destroy pat generalizations and reveal the particular people, families, and faces that were stereotyped, amassed, depersonalized, and sometimes destroyed by this oft-overlooked moment in history.

A deep and beautiful story … Poetically told and laced with Japanese folklore, the novel takes cues from a more mythical narrative, parables abounding in its fiction but always with a point.

Shimotakahara writes with refined sensitivity about the fragility of human nature, and how such vulnerability can transform into strength in the name of love.

Leslie Shimotakahara's novel is a poignant exploration of mothers and daughters, secrets and lovers, and the brutal legacy of Japanese internment.

Shimotakahara’s writing is personal and entrancing, unflinchingly shining a light on this difficult part of history.

[F]lawlessly transitions between the two storylines. ... As the story progresses, you'll find yourself itching to keep reading, just as anxious as Rita to uncover the truth of her mother's past.

Other titles by Leslie Shimotakahara