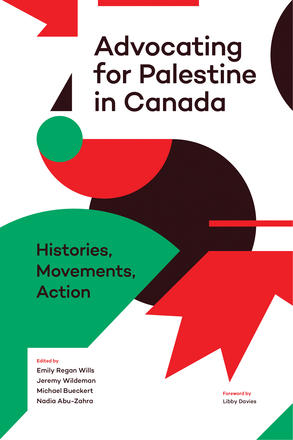 Advocating for Palestine in Canada

Advocating for Palestine in Canada

Why is it so difficult to advocate for Palestine in Canada and what can we learn from the movement’s successes? This account of Palestine solidarity activism in Canada grapples with these questions through a wide-ranging exploration of the movement’s different actors, ... Read more

Why is it so difficult to advocate for Palestine in Canada and what can we learn from the movement’s successes? This account of Palestine solidarity activism in Canada grapples with these questions through a wide-ranging exploration of the movement’s different actors, approaches and fields of engagement, along with its connections to different national and transnational struggles against racism, imperialism and colonialism. Led by a coalition of students, labour unions, church groups, left wing activists, progressive presses, human rights organizations, academic associations and Palestinian and Jewish community groups, Palestine solidarity activism is on the rise in Canada and Canadians are more aware of the issues than ever before. Palestine solidarity activists are also under siege as never before. The movement advocating for Palestinian rights is forced to contend with relentless political condemnation, media blackouts, administrative roadblocks, coordinated smear campaigns, individual threats, legal intimidation and institutional silencing. Through this book and the experiences of the contributing authors in it, many seasoned veterans of the movement, Advocating for Palestine in Canada offers an indispensable and often first-hand view into the complex social and historical forces at work in one of our era’s most urgent debates, and one which could determine the course of what it means to be Canadian going forward.

Emily Regan Wills is an associate professor of comparative politics at the University of Ottawa. She is the co-director of the Community Mobilization in Crisis project, which develops and implements innovative multilingual digital pedagogical tools for teaching community mobilization skills in the Middle East and elsewhere.

Jeremy Wildeman is a Fellow at the Human Rights Resource and Education Centre (HRREC), University of Ottawa. He is a scholar of international relations, Middle East politics, Canadian foreign policy, human security and development aid.

Michael Bueckert is Vice President at Canadians for Justice and Peace in the Middle East (CJPME), a national advocacy organization based in Montreal. He has a PhD in Sociology with a specialization in Political Economy from Carleton University; his dissertation explored the opposition to boycott movements.

Libby Davies has been a social activist for 45 plus years and began as a community organizer in Vancouver’s Downtown Eastside in 1972. She was elected to Vancouver City Council for 5 consecutive terms, 1982-1993. As the Member of Parliament for Vancouver East for six consecutive terms, 1997-2015, she became NDP House Leader, (2003-2011) and Deputy Leader (2007-2015). Libby continues to be an outspoken advocate for human rights, housing, peace, and social justice. She was awarded the Order of Canada in 2016.

Libby was appointed to the board of governors of Vancouver Community College in 2018, and serves as Vice Chair. She is also a board member and Vice Chair, of the Portland Hotel Community Services Society (PHS).

She is the author of “Outside In: A Political Memoir” (May 2019, published by Between The Lines, Toronto) and is a frequent public speaker on progressive transformative change and its relationship to politics. Libby is currently writing a new book.