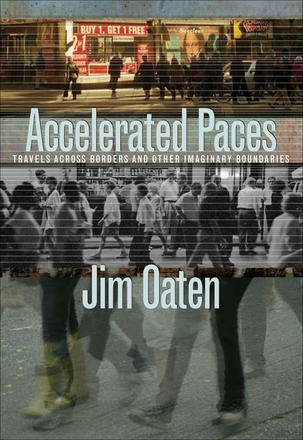 Dodging down back-alleys in bomb-torn Beirut. Wheeling past God and traffic in Mombassa, Kenya. Slipping around the edges of Alzheimer?s disease, the Gulf War, and the eternity of CNN.

Set somewhere between here and the heat-death of the universe, Jim Oaten?s debut collection ... Read more

Dodging down back-alleys in bomb-torn Beirut. Wheeling past God and traffic in Mombassa, Kenya. Slipping around the edges of Alzheimer?s disease, the Gulf War, and the eternity of CNN.

Set somewhere between here and the heat-death of the universe, Jim Oaten?s debut collection serves up random samples of literal and literary truth scooped up at top speed. Whether peeking out from the backseat of Mom and Dad?s car or surveying the grimy wings of mental wards, Accelerated Paces hurdles that uneasy terrain between creative fact and honest fiction. These short stories and pieces ignore borders as they jaunt thorough external trips and internal voyages.

This is both creative non-fiction and creative fiction, which follows the idea of crossing boundaries and blurring borders. Think part of this collection will be an explicit demonstration of how the two genres interplay, of how a non-fiction event can inspire a fictional piece, and, interestingly enough, the reverse as well.

Stamp your passport, and step on the edge. Buy a ticket, and take the ride.

?... the American writer?s influence (Hunter S. Thompson) is all over the essay collection Accelerated Paces. Whether it is a description of role-playing a cat in a mental health centre, careering through the streets of Mombasa in a taxi, or even attending a Robert McKee story seminar, Oaten?s writing constantly teeters on the blissed-out edge of chaos. ... For Oaten, verisimilitude is debased coinage, and the truth of a situation is captured in the vividness of language.? (Quill & Quire)

?... filled with personal voyages and literary truths. Blending topics such as the first Gulf war, CNN and religion with Oaten?s personal anecdotes and opinions, this book is nothing short of a good read.? (The Link)

?Accelerated Paces (Travels across borders and other imaginary boundaries) is Oaten?s first attempt at storybook recognition, and with an eclectic piece like this, it is bound to receive some literary acknowledgment.? (The Silhouette)

Jim Oaten was the inaugural winner of 'subTerrain''s creative non-fiction award, and has had previous work published in 'Vancouver Magazine', 'Vancouver Review', 'The Vancouver Sun', 'Pacific Rim', and 'Where'. Mr. Oaten has received a National Magazine Award and has been a Western Magazine Award finalist. Currently a denizen of East Vancouver, he lives in fear of real estate prices. 'Accelerated Paces' is his first book.