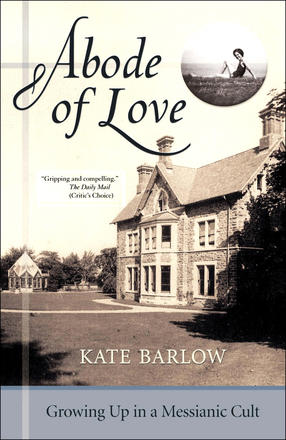 When Kate Barlow was a little girl, she moved with her mother and her older sisters to a ramshackle English mansion. They were not alone on the once-grand estate, surrounded as they were by twenty eccentric, elderly women, one of whom was her grandmother. ..or was she?

When Kate Barlow was a little girl, she moved with her mother and her older sisters to a ramshackle English mansion. They were not alone on the once-grand estate, surrounded as they were by twenty eccentric, elderly women, one of whom was her grandmother. ..or was she?

This remarkable memoir is the true story of life inside "The A," the infamous Agapemone, named for the Greek word meaning Abode of Love. It was a religious cult founded in mid-19th century England by a defrocked clergyman who claimed to be guided personally by the Holy Ghost. Agapemonites, many of whom were wealthy, unmarried women, lived together on the estate. They believed the Second Coming was imminent and that their founder would live forever. When Henry James Prince died unexpectedly, his successor declared himself the reincarnation of Jesus Christ, an announcement which caused rioting in the streets.

The book reveals the author's gradual awakening to the religious and sexual scandal that enveloped her family, as first the founder and then his heir — Kate's grandfather — continued the practice of taking so-called "spiritual" brides. In fact, these relationships were physical as well as spiritual, and some produced illegitimate children, Kate's mother being one of them. This first inside account of the infamous cult is also a story about family, and its lingering legacy on several generations, including Kate Barlow's own mother. It is a gripping, sometimes humourous, deeply human tale.

Kate Barlow spent her childhood at Agapemone in Spaxton, Somerset, England. She served in the Women's Royal Air Force in the early 1960s where she attained the rank of Flying Officer — a bit of misnomer as she says women were not allowed to fly back then. They also had to leave the forces once they were married, so in 1965 she left the WRAF. Ms. Barlow raised two sons and waited until coming to Canada to embark on a new career in journalism. She studied at Sheridan College in the early 1980s, going on to a rewarding career as a reporter with the Hamilton Spectator Ms. Barlow says it was the kind of career she had always wanted. "I remember wanting to be a newspaper reporter when I was about 16 — was it seeing the press posse waiting outside the gates of the A after my grandmother died? Probably, as I can still remember my fascination with the press appearance." Kate Barlow now lives in Oakville, Ontario. Abode of Love is her first book.

"Kate Barlow's memoir is as full of secrets as Dan Brown's The Da Vinci Code, yet as cozy as an Enid Blyton story. .. A multilayered pleasure to read. "

"A wonderful, child's eye view of growing up in one of the 19th century's most intriguing cults. "