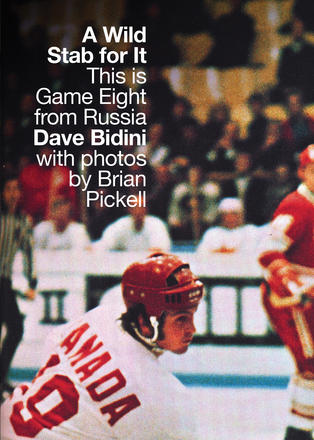 A Wild Stab For It

A Wild Stab For It

On the 50th anniversary of the 1972 Summit Series, a personal and poetic journey into the heart of hockey in Canada

As summer turned to fall in 1972, Canada was redefining itself and its place in the world. Politically, a spirited election campaign asked probing questions about ... Read more

On the 50th anniversary of the 1972 Summit Series, a personal and poetic journey into the heart of hockey in Canada

As summer turned to fall in 1972, Canada was redefining itself and its place in the world. Politically, a spirited election campaign asked probing questions about the nation’s past, present, and future — the nationalist pride of recent centennial celebrations contrasted with the stressed relationship between English and French Canada post-FLQ crisis. In a very different arena, similar issues were raised by the trials and triumphs of the players of Canada’s game.

On the 50th anniversary of what is arguably the single most important sporting event in Canadian history, Dave Bidini travels back through time to September 28, 1972. By asking Canadians of all stripes — athletes, artists, politicians, and pundits — to share their memories, whether they were there in Moscow’s Luzhniki Ice Palace or watching a TV rolled into a classroom, Bidini explores how the legendary Canada–Russia Summit Series changed hockey history and helped shape a nation’s identity.

Dave Bidini’s first book, published in 1998, was the popular and critically acclaimed On a Cold Road, about what it’s like to tour Canada in a rock ’n’ roll band. He has since written four more books, Tropic of Hockey (2001), Baseballissimo (2004), For Those About to Rock (2004) and The Best Game You Can Name (2005). When he is not writing or traveling the world, Bidini is rhythm guitarist for the Rheostatics. He also starred in the Gemini Award—winning film The Hockey Nomad. Dave Bidini lives with his wife and two children in Toronto.

With about ten minutes left to go in the first period, the puck jumped then fell to rest near centre ice like a fishing bob hitting the water. Almost immediately, it was scooped up by the red-helmeted Paul Henderson, who’d scored Team Canada’s two previous game-winning goals. If a lot of his teammates had seemed cement-ankled and heavy-hipped next to the skating-on-air Soviets, Henderson — and perhaps, his Leafs accomplice, Ron Ellis, as well as Yvan Cournoyer — played as if he’d stumbled upon a game he’d always been looking for: one driven by perimeter speed and puck savvy rather than a shoot-it-in offence designed to return the puck to the slot. From Game Five to Game Eight, Henderson moved about the ice with his tongue wagging and, more than any other Canadian player, he actually looked like he was enjoying himself, having fun despite the intense pressure and challenging conditions. History tells us that Henderson did what no player in any sport has ever done, at least not at this level of play — score three consecutive game-winning goals in three must-win games — but there was something beyond the benchmarks. He played like a kid on Saturday morning ice, oblivious, it seemed, to the intensity of the circumstances. He also reminded down-at-the-heels Canadians that their game, in the right hands, was about spirit and aplomb and riding the roar of the crowd, too. If the Russians had focused their attention on Espo and Peter Mahovlich and Gilbert and other alien forwards, Henderson’s abilities were less threatening because they most resembled theirs. In a way, not only would Team Canada’s impossible boy defeat Team Russia almost singlehandedly, he would beat them at their own game, too.

“A great little, nostalgic book for hockey fans that captures the beauty of a series that will never be forgotten. ” — NewsTalk 1010

Other titles by Dave Bidini