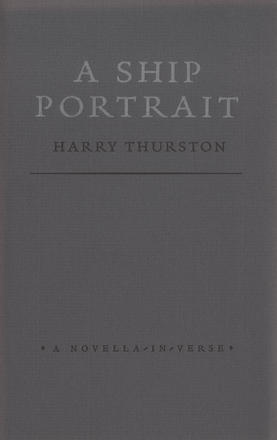 A Ship Portrait is a tribute to the life and art of John O’Brien, nineteenth-century painter of ships, written as what Harry Thurston calls “a novella in verse. ” Built upon two voices, O’Brien’s and the poet’s, the poem traces the painter’s life in Halifax during ... Read more

A Ship Portrait is a tribute to the life and art of John O’Brien, nineteenth-century painter of ships, written as what Harry Thurston calls “a novella in verse. ” Built upon two voices, O’Brien’s and the poet’s, the poem traces the painter’s life in Halifax during the apex and decline of the Golden Age of Sail. Thurston characterizes this era in Nova Scotia’s history as a time of shifting mythologies, of strife between Old World and New, and of a surprisingly cosmopolitan lifestyle sustained by the shipping industry.

“For some time,” says Thurston, “I had wanted to write a long poem about our historical relationship to the sea. Then, in 1984, I attended an exhibition of John O’Brien’s work at the Art Gallery of Nova Scotiaship portraits of a kind I had grown up seeing in the libraries, museums and parlours of Yarmouth. This artist’s vision, rather than the more romantically conventional viewpoint of the ‘iron men’ of wooden ship fame, seemed a promising lens. It took another two decades for me to begin writing what at first I imagined as a kind of nineteenth-century-style narrative poem. I needed a form that could reach beyond the traditional bounds of lyrical poetry, to address such matters as the economy and the place of the artist in societythe more proper concerns of a novel. I had always liked dramatic monologue, so began in O’Brien’s voice. Oddly, I found the lines unrolling in perfectly good blank verse. However, not long into the writing process, I began a dialogue with O’Brien, an exchange of our histories as Maritimers and of the working lives of artists, which bridge time and place. ”

We meet O’Brien on his deathbed from where he recounts his life as it began in 1831 aboard a ship bound for Canada. Alternating with O’Brien’s, Thurston’s own voice offers commentary, support and retrospection, reaching a long arm over the years to his own childhood stomping grounds in Yarmouth and the more subdued climate in Nova Scotia’s ports a century after the Golden Age. Thurston considers O’Brien’s contemporariesMelville, Ruskin and Turneras counterpoints to the painter’s career and as part of a wider examination of the role of artists and art in the composition of history.

Perhaps the most fascinating passages in the poem are those in which O’Brien’s artistic techniques and preferences are revealed. Thurston draws out this tension at the centre of O’Brien’s portraits, commenting on the extent to which the painter’s career hung in the balance alongside the Age of Sail. The poem’s two halves embody the crossovers between art and history, and how each shapes our perception of the other. Thurston’s vivid scenes hinge on associative details, creating a narrative that is exotic, grounded and subtly informative. In employing both contemporary and historic voices, he successfully condenses this real-life artist’s story into art, genuinely engaging in a thrilling period of Nova Scotia’s history.

This book is a smyth-sewn paperback bound in card stock with an offset-printed jacket. The text was printed offset on laid paper.

Harry Thurston is a poet, award-winning journalist, and author of more than two dozen books of poetry and non-fiction.

“This book recalls John Masefield’s salt-spray ballads of O’Brien’s era (and the 20th century), but there are nods to E. Annie Proulx’s The Shipping News. And parts of it sound like Ezra Pound’s Canto II, and make use of ‘non-poetic’ materials in the same way Pound does in his Cantos. ” George Elliott Clarke, The NovaScotian

Other titles by Harry Thurston