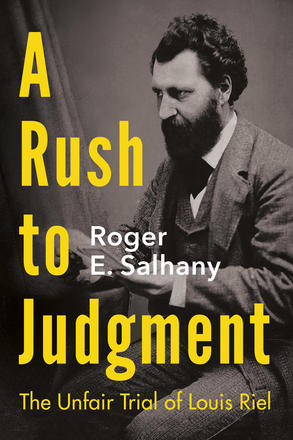 The trial and conviction of Louis Riel for treason in the summer of 1885 and his execution on November 16, 1885, have been the subjects of historical comment and criticism for over one hundred years. A Rush to Judgment challenges the view held ... Read more

The trial and conviction of Louis Riel for treason in the summer of 1885 and his execution on November 16, 1885, have been the subjects of historical comment and criticism for over one hundred years. A Rush to Judgment challenges the view held by some historians that Riel received a fair trial.

Roger Salhany argues that the presiding judge allowed the prosecutors to control the proceedings, was biased in his charge to the jury, and failed to properly explain how the jury was to consider the evidence of legal insanity. He also argues that the government was anxious to ensure the execution of Riel, notwithstanding the recommendation of the jury for clemency, because of concerns that if Riel was sent to a mental hospital or prison, he would eventually be released and cause further trouble. Salhany compels readers to reconsider Canada's most famous trial in court history.

Roger E. Salhany is a retired justice of the Superior Court of Ontario. A Queen’s Counsel and former trial lawyer, he has been a lecturer to judges, lawyers, law students, administrative boards, and police officers. He is also the author of eight books on criminal procedure. Roger lives in Ottawa.

Prime Minister John A. Macdonald was undoubtedly elated that Riel, who had been a thorn in his side for fifteen years, had been defeated and captured. Now he could proceed with his dream to extend Canada west to the Pacific coast by railway without interruption. It was time to excise the thorn before it caused any further damage. As far as he was concerned, Riel had committed high treason and had to be prosecuted and hanged. The best lawyers in Ontario had to be engaged to ensure a successful prosecution. Two immediately came to mind — Christopher Robinson, Q. C., and Britton Bath Osler, Q. C. — and they were quickly retained. To ensure that they pursued the prosecution vigorously, Macdonald sent the deputy attorney general of Canada, George Wheelock Burbidge, to supervise their work.

If Macdonald was to have Riel removed permanently, then Riel had to be tried for high treason, a capital offence. Treason, the betrayal of one’s superior, was considered the most heinous of crimes in British history. The common law recognized two kinds of treason: high treason, which was a breach of faith by a subject to his king; and petit treason, which was committed when a subject killed his superior. Although the punishment for both treason (high and petit) and felony was death, a conviction for treason resulted in a forfeiture of the accused’s lands and goods to the king, who could do whatever he wanted with them. A felony, on the other hand, resulted in a forfeiture of his land and goods to the accused’s lord, not to theking. In early English history, the king wished to extend the law of treason at the expense of felony in order to fill his constantly depleting royal coffers. The lords, however, wanted to resist this intrusion on their rights to avoid losing their seigniorial dues. King Edward III finally settled the dispute in 1351 when he enacted the famous Statute of Treasons. This act confined high treason to three branches: actual attacks on the king’s person; war actually levied against his authority; and adherence to his enemies. Althoughlater British monarchs passed treason statutes broadening the definition of treason to prevent any form of dissent, those statutes were repealed and the act of 1351 remained essentially unaltered until 1848 when the Treason Felony Act was passed to quell disturbances in England arising out of revolutions that had been occurring in continental Europe.

It had been originally intended to send Louis Riel to Winnipeg where he could be tried by a Superior Court Judge of the Manitoba Queen’s Bench with a jury of twelve members of the community, but the frantic telegrams at the last minute from Ottawa had given instructions that he be tried in Regina. In Manitoba, Riel would have the right to be tried by a mixed jury of twelve French- and English-speaking jurors and both French and English could be used in court. No such right existed if Riel were tried in Regina, which was in the North-West Territories. The North-West Territories Act of 1880, passed by the federal government, provided that an accused would be tried by six English-speaking jurors, not twelve, presided over by a magistrate, not a superior court judge, and only English could be used in court. Prime Minister Macdonald was not going to give Riel an opportunity to escape the hangman by having French-speaking members on his jury.

Regina, a thriving western settlement, had been founded in 1882, three years before the Métis rebellion. Although it was initially assumed that the CPR, which began construction in 1881, would travel throughthe rich “Fertile Belt” of the North Saskatchewan River valley, this plan was discarded the next year in favour of a more southerly route across the arid Palliser’s Triangle, a more direct route closer to the Canada-U. S. border, making it easier for the CPR to keep American railways from encroaching on the Canadian market. The southern route across the plains also allowed for easy construction and the CPR owned nearly half the land surrounding the proposed track. Since the proposed route was too far away from Battleford, the territorial capital, the CPR was instructed by the federal government to choose a new capital on the government’s behalf. A location 245 miles to the southeast of Battleford was chosen, at the point where the railway crossed Wascana Creek, and Regina became the new territorial capital before the first train arrived on August 23, 1882.

By April 1883, less than a year after the first settlers arrived, Regina had approximately four hundred buildings — including fifteen stores, two banks, four feed stores, two carriage shops, four hotels, a church, and a post office — and a population of about a thousand. In the late 1870s, the headquarters of the North-West Mounted Police (NWMP) were located at Fort Walsh to deal with problems caused by whisky traders and by the presence of Sitting Bull in Cypress Hills. As settlers moved west with the railways, policing them became more important and the headquarters were transferred to Regina. Construction of the new North-West Mounted Police barracks began in 1882. In that year, the force was increased to five hundred to cope with the increased tasks being demanded of it, and the police began to use the railway to bring in recruits more easily from the eastern provinces.

Although Regina was on the planned route of the new transcontinental railway, the CPR had only reached Qu’Appelle (then called Troy), some eighteen miles to the east, at the time of the rebellion. Regina was originally called “Pile of Bones” because of the large piles of buffalo bones on the banks of Wascana Creek, a spring runoff channel rising a couple of kilometres to the east. The Cree people believedthat the living buffaloes would not leave the bones of the dead buffalo; as long as there were bones in the area, there would always be buffalo to hunt. The pile of bones, which the Cree named “Okana ka-asateki,” was at times six feet high and forty-two feet in diameter. However, the name “Pile of Bones” was not good enough for the capital of the North-West Territories. Although several names were suggested for this new town on the banks of Wascana Creek, it was decided to ask Princess Louise, the wife of Canada’s governor general, to name it. She decided to name it “Regina,” in honor of her mother, Queen Victoria. On December 1, 1883, Regina was declared a town and made the capital of the North-West Territories. By 1884, a public school and a newspaper (the Leader) had been established. In 1885, at the time of Riel’s trial, there were two hotels: the Windsor, on Broad Street, and the Pacific, at the corner of Broad and South Railway Street, with hardly enough rooms to handle the press reporters, court officials, and the curious who had travelled from eastern Canada and the United States to witness the proceedings.

A Rush to Judgment is a fine example of sympathetic, thoughtful scholarship, with a clean style that neatly summarizes complex topics in digestible chunks, all the while rooted in the evidence of the time.