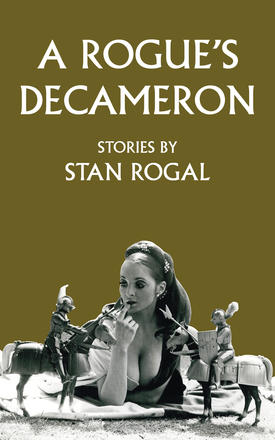 A Rogue's Decameron consists of ten stories - tales - that loosely follow the fabliaux style and are based within the spirit of Chaucer's The Canterbury Tales and Boccaccio's The Decameron: extravagance, joy and ribald humour around sex, lust, vice, death and other ?hungers' ... Read more

A Rogue's Decameron consists of ten stories - tales - that loosely follow the fabliaux style and are based within the spirit of Chaucer's The Canterbury Tales and Boccaccio's The Decameron: extravagance, joy and ribald humour around sex, lust, vice, death and other ?hungers' of human beings. Using similar framing technique as these works - a prologue, a short description of each story and an epilogue, the stories explore themes such as social commentary and satire aimed at personal politics, societal mores and customs, hierarchies, and religious beliefs. All with Toronto as a backdrop and brought up to date for the sensibilities of a 21st century audience.

Stan Rogal was born in Vancouver where he worked for several years in the bowling business. He moved to Toronto in 1987 to complete an MA English at York University. He ran the popular Idler Pub Reading Series for ten years, was co-creator of Bald Ego Theatre and is now the artistic director of Bulletproof Theatre. He has published thirteen books (eight poetry, two novels, three short story collections) and his work has appeared in several anthologies and in numerous literary magazines in Canada, the US and Europe. He continues to act and direct and several of his plays have been produced across Canada.

Rosa arched her broad back against the cushioned arm of the couch. She stretched her plump left leg across the worn leather and ground her French heeled shoe into the pine floorboards. Her equally plump right leg hung quivering in the air, a slight pair of damp pink lace panties dangling from a surprisingly delicate ankle. Her dress was unbuttoned at the neck and a pair of exquisitely large breasts danced half-in, half-out of an industrial wired bra. Two clumsy hands--not her own--grappled with the breasts, rolled the flesh and pinched the nipples.

[Rogal's] short stories are jewels of literature: highly polished, bright flashes of insight in a compact form, sharing the intensity of concise language with poetry, following a well-constructed narrative that highlights a single event, crisis, or surprising dénouement

Other titles by Stan Rogal