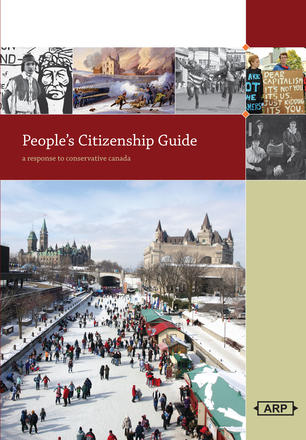 In 2009, Stephen Harper's Conservative government changed the contents of the official citizenship guide that is given to all recent immigrants. The new version contained a lot more military history and plenty of information about the monarchy, but little about public programs ... Read more

In 2009, Stephen Harper's Conservative government changed the contents of the official citizenship guide that is given to all recent immigrants. The new version contained a lot more military history and plenty of information about the monarchy, but little about public programs such as medicare or education, or our rich history of social justice movements. Ignoring the work and democratic struggles of generations of newcomers, it presumes that new immigrants need to be taught how to "take responsibility" for their families. In short, the official guide outlines an exceptionally narrow, conservative view of Canadian politics and society. In People's Citizenship Guide, a group of progressive scholars offer an alternative citizenship guide: a lively, political, humane--and more honest--alternative to Stephen Harper's version of the story.

Esyllt Jones studies the history of health, disease, and social movements, and is a Professor of History at the University of Manitoba. She is the author of Influenza 1918: Disease, Death and Struggle in Winnipeg (UTP, 2007).

Adele Perry is Professor of History at the University of Manitoba in Winnipeg. She was born and raised in a non-Indigenous family in British Columbia, did hard time in Toronto, and has lived in Winnipeg since 2000. She writes about the nineteenth century, gender, Canada, and colonialism, and is the author of On the Edge of Empire: Gender, Race, and the Making of British Columbia, 1849-1871 (University of Toronto Press, 2001), Colonial Relations: The Douglas-Connolly Family and the Nineteenth-Century Imperial World (Cambridge, 2015), and the co-editor of four editions of Rethinking Canada: The Promise of Women's History. With Esyllt Jones, she coordinated 2011's People's Citizenship Guide to Canada, published by ARP Books. You can find her on twitter at @AdelePerry.

This book is a welcome political intervention. From its title through to its back cover,The People's Citizenship Guide's politics are open and easily discerned. Such overt and provocative language, which on the first page labels the vision of Canada presented in Discover Canada as "nationalistic, militaristic and racist," may turn people off the book before they can digest its important content. That being said, the explicit nature of the book's politics provides excellent contrast to the political perspectives that are often left implicit in Discover Canada. In publishing The People's Citizenship Guide, Jones and Perry should be lauded for calling explicit attention to the politics of citizenship. -- Tom Peace, ActiveHistory. ca

. ..an excellent and highly readable overview of Canada; at the same time it is a clear and welcoming invitation for new immigrants and settled citizens to be active and engaged in creating a better and equitable society for all. -- Terry Wolfwood, Victoria Central America Support Committee

The People's Citizenship Guide offers an interesting and engaging counterpoint to the current re-branding of Canada's once peaceful, rights-championing image (although we quarreled with that, too). Penned by historians Esyllt Jones and Adele Perry, the Guide is a testament to the discipline's deeply political nature, especially where it concerns our understanding and interpretation of nation and state. -- Elise Chenier, BC Studies

The People's Citizenship Guide is the work of a team of contributors from across the country, handsomely produced and effectively illustrated. In appealing for an informed, engaged and critical citizenship, this guide also finds room to discuss the place of cultural activism as a source of alternative identities pointing to the significant role of writers, artists, and performers in telling the Canadian story. -- David Frank, Our Times 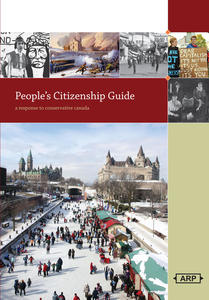 Other titles by Esyllt Jones

Other titles by Adele Perry