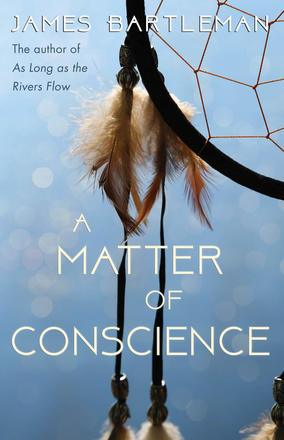 A Matter of Conscience

A Matter of Conscience

A novel of love and betrayal dealing with the biggest issues facing Canada’s Indigenous peoples today.

In the summer of 1972, a float plane carrying a team of child welfare officials lands on a river flowing through the Yellow Dog Indian reserve. Their mission is to seize ... Read more

A novel of love and betrayal dealing with the biggest issues facing Canada’s Indigenous peoples today.

In the summer of 1972, a float plane carrying a team of child welfare officials lands on a river flowing through the Yellow Dog Indian reserve. Their mission is to seize the twin babies of an Indigenous couple as part of an illegal scheme cooked up by the federal government to adopt out tens of thousands of Native children to white families. The baby girl, Brenda, is adopted and raised by a white family in Orillia.

Meanwhile, that same summer, a baby boy named Greg is born to a white middle-class family. At the age of eighteen, Greg leaves home for the first time to earn money to help pay for his university expenses. He drinks heavily and becomes embroiled in the murder of a female student from a residential school.

The destinies of Brenda and Greg intersect in this novel of passion, confronting the murder and disappearance of Indigenous women and the infamous Sixties Scoop.

James Bartleman is the former lieutenant governor of Ontario and the bestselling author of the novels As Long as the Rivers Flow and The Redemption of Oscar Wolf. A member of the Chippewas of Rama First Nation, he is also a retired ambassador and a member of the Order of Canada. He lives in Perth, Ontario.

Bartleman’s strength as a writer is his compassion. He respects each of his characters and sets the stage for real-world discussions of Canada’s past, present, and future.

Graphically brings alive the horrific consequences of the removal of Indigenous children from their families and communities.

As Bartleman succeeded in educating me on this grim piece of history, A Matter of Conscience is a moving piece of literature and a must-read.

The novel may serve as an accessible entry point for readers interested in learning about this traumatic chapter in North American history.

Forces us to confront uncomfortable truths as we seek a path to reconciliation.

James Bartleman, a First Nation person himself, writes movingly … about the tragic reality of misogynistic racism and violence against Indigenous women and girls.

Other titles by James Bartleman