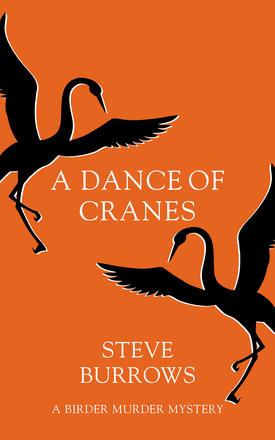 Newly estranged from his girlfriend, Lindy, Inspector Domenic Jejeune has returned to Canada to the news that his brother, Damian, has gone missing in Wood Buffalo National Park while conducting field research on Whooping Cranes. But even if Jejeune can find Damian in the vast, remote wilderness, staying alive afterward may prove a far greater challenge.

Back in the U. K., Sergeant Danny Maik is on a missing person search of his own. Maik must try to track Lindy down after Jejeune's plan to protect her fails and she is abducted by a sociopathic killer. The disturbing circumstances of Lindy’s disappearance mean that even if he finds her, the danger will not be over.

Across two continents, the lives of Domenic and Lindy are spiralling toward a shared fate. And it seems there is nothing anyone can do to help them.

VI. Six. The most dangerous number of all. It meant perilous conditions. It meant violent, unpredictable forces. And for Annie Prior, it had meant death.

The man stared back up the river, transfixed for a moment by the raw energy of the water boiling down through the narrow chasm. A low roar reverberated off the rocks, filling the air with its dull thunder. He had never seen Category Six rapids before, but he knew these would qualify. Surely, no level of river danger could exceed the way this water was churning through the steep-sided gorge, crashing down in explosions of white spume onto the jagged rocks below. Even for the most experienced white-water canoeist, any attempt to navigate this stretch of rapids would be madness. For a novice, without a helmet or life jacket, it was tantamount to suicide. But for someone who is in fear for their life, any escape route must be tried, no matter how terrifying.

The man still found it hard to believe that this stretch of river was undocumented. In most places on earth, such waters would have been part of the local folklore, highlighted on the maps, most likely with a sidebar warning about their dangers. But in this vast, remote wilderness, even deadly Category Six rapids could go unrecorded. They were merely one more hazard in this unforgiving landscape that offered no quarter to those who dared to challenge it. Those like Annie Prior.

He had suspected the body would end up in this eddy. The two of them had noted it during their earlier reconnaissance of the river, when they had decided the drops and ledges of this section were far too risky, far too treacherous to be navigated. He’d headed for this spot as soon as he’d seen the canoe disappear into the rapids. Annie Prior hadn’t bailed out by then, and that meant she wasn’t going to. All that remained for her now was a short, dizzying descent toward death. As the raging waters thrashed the canoe to pieces on the razor-sharp rocks, she would have been rag-dolled into a state of near-unconsciousness, even before the craft flipped and submerged her in the frigid currents. After that, there would have been no hope. Annie Prior’s body would be pounded against the boulders time and again by the force of the churning water, until it eventually broke free of the rapids and drifted downstream to this spot.

He saw Annie’s lifeless form now, a few metres from shore, turning in a slow spiral. Set against the manic rushing of the river beyond, the movement of the water in the eddy was as benign as the swirling of cream in a coffee cup. The silence here seemed to fill the air like a pocket of empty time. But despite the peace of this place, he could not allow Annie Prior’s body to remain like this.

He took off his clothes and laid them in a neat pile on the shore. As cold as the water was going to be, it would be vital that he had warm, dry clothes when he was done. In these temperatures, damp clothes wouldn’t dry for a long time, and as evening approached, they’d leach out what little body heat he had. With no heavy jacket to protect him, it would leave him vulnerable to the cold night ahead.

After two steps, the shallow incline disappeared into a steep drop-off, plunging him thigh-deep into water so cold he couldn’t even breathe. Numbness seized his legs, freezing out all feeling, the still air all around him seeming only to heighten the intensity of the icy chill. Carefully testing the footing, he began wading forward. He felt his chest contract as the icy water rode up his ribcage, and he opened his mouth repeatedly, as if trying to bite off chunks of the cold air to gulp down into his lungs.

Part of him had hoped he would not see her face, but as she drifted round towards him, he could not bring himself to look away. She stared back at him through cold, dead eyes, her face so bloated and battered it was almost unrecognizable. He had not seen many smiles from Annie Prior, amid the firm set of her jaw, her intense concentration, her determined expressions, but those few that had come his way had been worth waiting for; face-brightening moments of unfettered joy. She should have let herself smile more often, he thought.

He stretched out his arm across the glassy surface and his fingertips touched the rough Gore-Tex material of Annie’s jacket. He tugged at it and the body began to drift gently in his direction. He felt in the pocket of the jacket to retrieve Annie’s inReach device and clicked it off. Then he removed the battery and threw both parts of the unit into the fast-flowing waters beyond the eddy. He reached out once again and pushed Annie’s head under the water, forcing the body down against its natural buoyancy until it snagged on a submerged log.

His grisly task completed, he was in the process of turning away when the body broke free and burst up beside him in the water. He recoiled from the grotesque mask of discoloured flesh with its dead, unseeing eyes, sputtering and gasping furiously as he splashed back into the frigid water. Recovering, he approached the body and tried again, pinning it beneath the log and securing it firmly. He paused for a moment, in case the body broke free and once more floated to the surface. But this time, it held fast and he backed away carefully until he reached the shore.

He emerged from the water, shivering violently. He pulled on his clothes as fast as his numb hands would permit, hugging his thick, lined sweater around him tightly when he had finished. As he stepped into his boots, he stopped to fish out his own inReach device. He pried off the case and removed the battery. Pausing, he held the two parts as if testing their weight. And then he slid them both gently into the water. For a moment they seemed to hang suspended on the surface, and then they slowly sank, until through the clear water, he saw his only contact with the outside world disappear.

Burrows smoothly integrates bird conservation concerns with a complex mystery plot. .. Readers who like their whodunits with an ecological tinge will be happy.

Praise for Birder Murder Mysteries:
“A murder plot built around birdwatching doesn't, at first, seem plausible or even possible. But Burrows pulls it off. .. Riveting from first page to final line. ” —Globe and Mail
“Skillfully written, full of moral ambiguities and artful puzzles, with a spine-tingling final sentence. ” —Kirkus Reviews
“If you are interested in birding, this series is a must. If you don't know an owl from a canary nor care to, but are keen on police procedurals, I would still recommend this series. It is just that good. ” — Reviewing the Evidence

Never a disappointment. ..A fabulous instalment in a series that is reliably delightful.