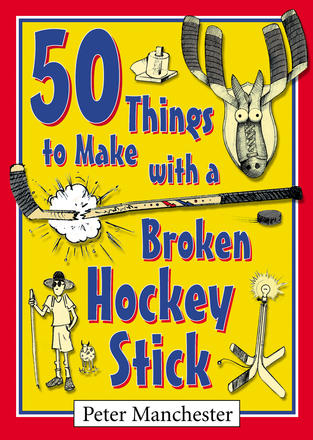 50 Things to Make with a Broken Hockey Stick

50 Things to Make with a Broken Hockey Stick

From the days when proto-humans lashed animal jawbones to sticks and whacked wildebeest-poop slapshots in Olduvai Arena to today's super-high-tech computer-assisted extravaganzas, one by-product of the hockey game has gone unnoticed and untapped. Until now . ..

From the days when proto-humans lashed animal jawbones to sticks and whacked wildebeest-poop slapshots in Olduvai Arena to today's super-high-tech computer-assisted extravaganzas, one by-product of the hockey game has gone unnoticed and untapped. Until now . ..

In 50 Things to Make with a Broken Hockey Stick, Peter Manchester transforms the agony of a fractured stick into the thrill of creation. Instructions and explicit cartoons show woodworkers of all abilities how to fashion items for outdoors, items for indoors, and items without any purpose at all. No basement artiste will ever throw away a broken hockey stick again. The finished projects will delight friends and win the respect of detractors, even those in the maker's own household.

Using broken hockey sticks as tomato stakes is elementary compared with crafting a Walking Stick or a Pinata Stick. But Manchester goes far beyond making a stick out of a stick; his inventions encompass the full potential of this free and almost infinite resource. Even in this age of miracle materials, ordinary recreational hockey sticks are a tough, flexible composite of resin and wood, and the broken pieces are just too good to throw away.

Truly practical designs include a modern Travois, a springy, long-range Catapult, and a Toilet Paper Holder for the well-appointed fishing camp. Science fair projects leap from the pages of 50 Things to Make with a Broken Hockey Stick: a Wind Vane, a combination Sun Dial and Snow Depth Gauge, and a Geodesic Dome that requires plenty of duct tape. Accessories for the home include a Curtain Rod for the bedroom of a hockey-crazed kid and a Lamp that really works. Fathers and children can bond as they manufacture gifts and sporting goods: a Pot Rack, a Wind Sail, an Ice Croquet Set, and a Bathroom Occupancy Designator. The book's pièce de résistance is the Mock Moose, a trophy made from a skate and at least four stick blades.

An accomplished illustrator and painter, Peter Manchester lives in Sackville, New Brunswick. His passion for discovering the magnificent in the mundane extends beyond hockey sticks into the realm of history, an interest enflamed by his experience as a museum curator. Totally without the aid of research, he illuminates the march of progress from pre-history to the post-rink life of the hockey stick. 50 Things to Make with a Broken Hockey Stick was his first foray into authorship.

"You'll never again throw out a splintered stick without wondering about the coat rack you need for the foyer. "

"Some quite cunning ideas. "

"Thoughtful, yes, but practical, too. "

Other titles by Peter Manchester