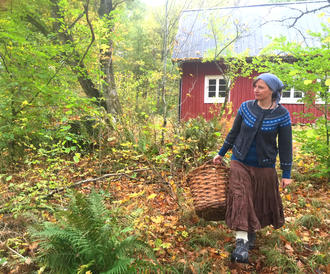 On living and writing off the grid: Interview with Andrea Hejlskov

When author Andrea Hejlskov realized she wasn't living her most authentic life and the life she'd pictured for herself, she took her family and moved closer to nature. Publisher Caitlin Press interviews Andrea about living off the grid, the rewilding movement, "toxic positivity," and her memoir  Escape to the Wild.

Caitlin Press: You and your family lived a “normal” life in Denmark, working and going to school. Why did this life become unbearable?

Andrea Hejlskov: There were two things above all. First, I was working as a child psychologist at the community. In my attempt to help children, I became more and more aware that many of their supposedly individual problems were actually based on our culture. I always felt I could never really help them—and that broke my heart.

It was also a very tiring job: I was always in a hurry and yet I never had enough time and never enough money. I always had the feeling of running after everything, never enough. But basically it was not the stress that was the problem, it was much deeper: when I was young, I wanted to make a difference in the world, I wanted my life to be meaningful—but somehow I unintentionally became just a cog in the wheel of society. My life just happened to me. I had never consciously chosen all this.

Second, family was always very important to me. But I never had the feeling that we were a real “nuclear family,” we felt more like satellites. I did not know my children as well as I would have liked. I realized that my older children would move out soon, and I wondered if I had really done my best, if I had been the kind of mother I wanted to be, or if I had only followed the values and rules of society. It was a very problematic time for me, and it raised some difficult questions.

The answer was no, I was not the mother I had imagined. And no, I did not make a difference in the world. I worked so hard—and still felt that it did not mean anything. So it was a real existential crisis.

CP: Living “off the grid” has become, in a sense, glamourized—particularly through social media. Your book is definitely an unromanticized version of living in the wilderness—your family has arguments, you have projects fail, and you talk honestly about the luxuries most people take for granted. Why was it important to tell the story from this angle?

AH: Because I think “toxic positivity” is a thing and actually something that hinders our development as a culture right now. We need to change, not at least due to climate change, but as long as our images of “authenticity” and “nature” are so skewed and twisted, romanticized and idealized—kind of like a Christian version of paradise—we will not be able to change. Nature is not paradise. Being authentic is not easy. Salvation does not exist. Quick fixes do not exist. This is the lie our culture told us. These are the commercials. I wanted to speak against that, I wanted to provide honesty in a culture of lies. Really.

Living closer to nature is a challenge because nature will strip you naked and force you to face yourself, which is something that is not easy nor pleasant. However, beauty does exist and another way of living does exist. It’s just not a commercial. Don’t believe the commercials.

CP: You are part of a movement called rewilding. What is it?

AH: Our society has conquered not only most of the planet but also most of our human emotional life. In our culture, there is not much “wild” left that is tolerated. Anger, ecstasy, tears, uncontrollable emotions—we always try to control everything, to predict everything, to manage everything. But nature is wild, life is wild, and rewilding is about reconnecting with these fundamentally human emotions. So this lifestyle is about providing a space for all non-conformities, not controlling, managing, exploiting, but just letting the existence exist.

In this respect, one can also compare stress with a monoculture in agriculture—there, the fields are also put under stress, they are treated with chemicals in an attempt to wrest them more and more and more. We do the same with our minds—we expect the impossible (a woman must be a good mother, make a career, have a beautiful body, be productive, pretty, well-organized and so on). And we also use chemicals to increase our productivity, to perform more and more and more.

Rewilding is about getting back to a more natural view. Allow children to play in the dirt and climb trees, even if it is dangerous. It’s about dancing naked in the rain and not caring about what you look like. And it’s about sitting by the fire and making time for the kind of conversation that can only unfold when you have time. 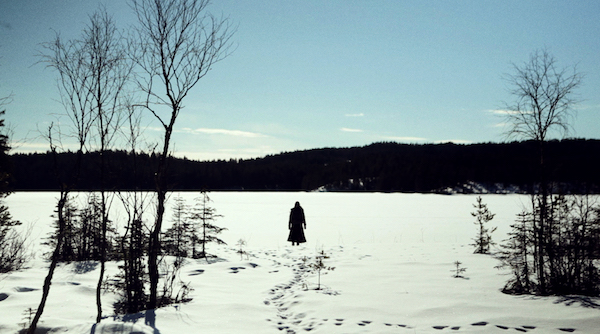 CP: Your four kids were a range of ages when you embarked on this adventure—from toddler to teen. How did their experiences compare to what you thought might happen?

AH: When you hear about these stories about people making radical life choices the story often involves small kids or young couples. This story is different because our children were bigger and knew of another life, and they actively changed lifestyles. Actually, I thought it would be more difficult for them than it seemed to be. Along the way we had to make a lot of compromises because there were different needs in the family (for instance homeschooling didn’t work out) but I think this is a positive. We learned to identify and communicate our needs rather quickly.

What surprised me the most about their reactions were two things. First, how many thoughts they actually had about life and what constituted a good life, our culture, the meaning of life, and all this. Kids really think about these things and somehow we never really spoke (enough) about it in our old life. It was a surprise to me to really experience the depths of my children cognition and emotional understanding. It made me sad to think about how much I had missed out on in our old life—but also made me proud because here were these children and they had all these thoughts and emotions about what it means to be a human being and we were able to discuss so many things. My daughter for instance, I learned a lot about feminism from actually hearing what she had to say.

The second thing was how much it changed them to be able to help and actually participate in the daily life. It gave them a confidence that they were needed—really needed—and not only for pretend. It was actually very important that they helped out and learned skills and became part of the “smooth machine” that we had to transform ourselves a family into. Their self-confidence changed by learning actual practical skills—and that was beautiful to see! 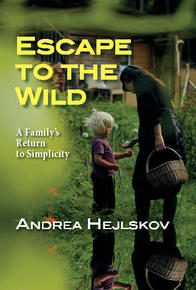 CP: What is the most important thing you hope readers will take away from your book?

AH: There’s a motto in the off-grid community and it goes like this: chop wood/fetch water. I like it. Do what needs to be done. Back to basics. Chop wood. Fetch water. This is what we do—we force ourselves to deal with the real actual reality of being a human being on this earth. This old guy once told me that the most important thing about living off grid is that you have to deal with your own shit. I take this in both a tangible and metaphorical way. You have to face yourself. You have to face reality. You have to face the good and the bad.

Another thing that I really hope people will take from this book is that it is possible. It’s actually possible to do something else. It’s not easy, it’s not glamourous—but it is possible.

CP: What 3 things did you miss the most that first year?

Andrea Hejlskov is a Danish author and journalist living off the grid in the wild woods of Southern Sweden. She has lived with her husband and four children in the forest for more than six years. She is the author of a children’s book and a memoir and holds engaging talks on the impacts of life-changing decisions.

Thanks to Monica at Caitlin Press for putting together this insightful interview with us.  Escape to the Wild is available now on All Lit Up. 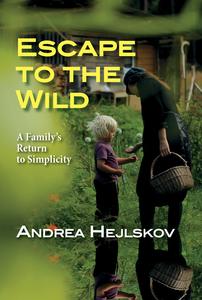 Escape to the Wild