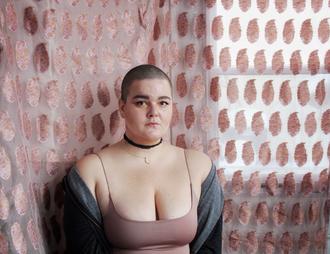 Multidisciplinary artist and writer Tara McGowan-Ross—whose coming-of-age memoir Nothing Will Be Different was recently published by Dundurn Press—sits down with us Q&A-style to talk about pomodoros as writing rituals, how being an author is a dual job, and what makes a repulsive character like Hannibal Lecter so compelling.

All Lit Up: What's your perfect writing day?

Tara McGowan-Ross: My perfect writing day begins at a truly ungodly hour. I’m a morning person in the extreme, and I am most productive for the three or so hours after I first wake up. On this perfect day, I’d wake up without disturbing anyone I live with at 4:30am and I’d wash my face, brush my teeth, make some tea, and immediately get to work on my early-morning writing pomodoros. I like my pomodoros 20 minutes on, 10 minutes off. I’d do three of these circuits, and produce between 400 and 1000 original words on whatever I’m working on, and on my 10-minute breaks I’d stretch, fix a quick breakfast, take medication and supplements, that kind of thing.

By this time, my partner would probably be up, but he works remotely very early, so i’ll maybe squeeze a few minutes of hang time in with him before I picked an audiobook or a queue of podcasts on writing and started suiting up my big pitbull/lab mix, Goose, for the hike to my external studio. Once we’re all suited up, we’d hike the 8km over Mount Royal from the west end of Montreal, where we live, to the Mile End, where my studio is.

Once I’m at my studio, I’d start my edits for the day, and work on editing and revising on my pomodoro schedule, taking a quick shower and eating lunch and maybe running a few errands on my breaks, until 4pm when my brain stops being able to produce smart people thoughts every day, on the dot. Mid-afternoon to early evening is all about reading and making some notes for the next day, although these notes are usually very stupid. My partner would join me for dinner at my studio, fresh from an afternoon of painting at his studio, and bring the stroller we use to take the dog on the Metro with him. After dinner, we’d metro home! Since this is a perfect day, e-mails, boring freelance contracts, taxes and the like do not exist, so I wouldn’t have to do any of that. I’d listen to lots of Tchaikovsky and Debussy while writing or revising and lots of Steely Dan and Kanye West on my breaks. Perfect day.

ALU: Which writers have informed your practice the most?

TMR: I started off writing as a poet, and lately all the poets I really feel inspired by are rappers—especially the more absurdist lyric in Kanye West’s mid-career work and Jay-Z’s more recent one. Other poets who have greatly influenced me are Hart Crane, Tommy Pico, Jake Byrne, Megan McCracken, and Julie Mannell. I like poetry that takes abrupt left turns, which takes conventions from the pastoral tradition and applies it to urban spaces, and which is rich in either scene, philosophy, or both.

When it comes to fiction, I can never get enough of Donna Tartt or Otessa Moshfegh—I think I discovered both of their work late, at a time when I was really sick of what I felt was a cloying kind of moralizing in both art and art discourse. In art, I think that kind of moralizing perpetuates a misogynistic and destructive culture of purity, especially when we apply it (like we usually do) to the writing of women and queer people. Many of Moshfegh and Tartt's characters are not overly sympathetic (I read The Secret History and My Year of Rest and Relaxation as an introduction to their respective works) and yet these characters feel very human, very fleshed out with real flaws—the kind of flaws that make them sometimes hard to sit with. Then it's up to the strength of the writing to make you stick around, which both writers did for me very easily. I’m also endlessly grateful for the numerous worlds that Neil Gaiman has spun, each of which feel like they’re just for me. I'm very interested, as a millennial who has been steeped in a deeply Identitarian culture my whole life, in the way he can write himself invisible in his books, or write in a voice that isn't his.

For non-fiction, I’m delighted by Fran Liebowitz, look up very much to Susan Sontag and Joan Didion, and reverse Hunter Thomson as a sort of twisted and inverse saint, a kind of beacon of hope for a person who is undeniably a master of his craft without ever once seriously attempting redemption. Someone I can't remember once called him the only true American moralist and I love that because of how messed up it is.

ALU: What's one book you always return to?

TMR: Everything in my life can be divided up into what happened before and what happened after I was gifted a copy of Anne Michael's Fugitive Pieces by a family friend. Lots of novels written by poets feel overwrought, to me—I described one I didn't like much as saccharine, there was just too much going on, the reading experience was like eating too much chocolate. Michaels doesn't feel like that. I’m not a very religious person. Fugitive Pieces feels like a message from God.

TMR: I have worked very hard to remain so unimportant that turning my phone off before I start writing will never be a disaster. It's very important that my writing space be very beautiful, so that I feel like a very beautiful person doing my beautiful job—luckily, I have a very bohemian taste in pretty things so most of my studio is outfitted with barely-refurbished trash, a second-hand desk, and dollar store devotional candles. I work in pomodoros which are 20 minutes on, 10 minutes off, and it works for me. I need to do daily, long bouts of low-impact exercise (usually walking with or without my dog or riding a bike not particularly quickly). I need to write before I do anything else, which is honestly kind of superstitious of me and I wish I could get over it. It's like a magic spell, really: a way of structuring my day so that I consider writing to be the most important thing in my life, upon which the rest of my day is built. I don't write a lot at once—I try to aim for between 400 and 1000 words. That is, however, between 146,000 and 365,000 words a year. 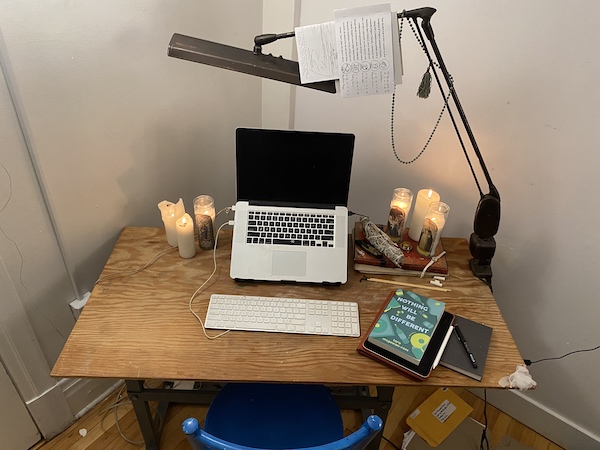 ALU: What's the hardest part about being a writer?

TMR: This was explained to me by my friend and mentor Stephanie Domet, but I have indeed found it to be the hardest thing: being a writer is actually two jobs. The two jobs are being a writer, and being an author. I define being a writer as doing things that inspire you, taking good care of your body and mind, getting words down on paper, and making sure those words are good. This requires, for me, a very strict routine and a kind of boring life except for a few really fun adventures a year. When I'm writing, I need near-total silence (except perhaps some music with absolutely no lyrics whatsoever), complete isolation, and to not be interrupted and disturbed for at least 30 minutes (if I'm only writing 400 words) and as long as 8-10 hours in a day (if I'm also editing). I need this pretty much all the time, as I struggle to get back into a routine when I'm thrown off. It's quiet, slow, contemplative, and you need to be extremely vulnerable or it doesn't work.

Being an author, which is about being published and relevant and well-connected, is about doing a lot of usually under- or un-paid and labour-intensive work, traveling in a way that disrupts your routine, maintaining a daily and engaging online presence (without saying anything that will get you piled-upon) on 4-5 million separate applications which are all designed to make you upset and scatter your attention. You have to do marketing and publicize your book. It's erratic, fast-moving, and public-facing, and you need to have a thick skin and a long fuse. These jobs are fundamentally opposed to one another and it’s extremely hard to do both of them without letting one take over the time you spend doing the other. Many writers mistake one for the other, over-invest in one and neglect the other, or burn out from the effort of switching back and forth. It's a wild ride. 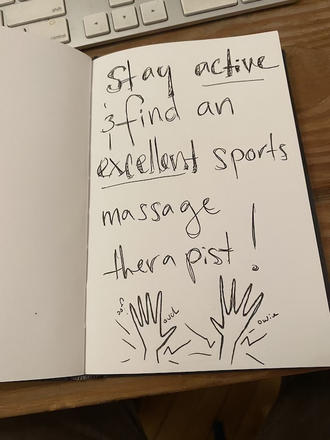 ALU: Who's your favourite fictional character?

TMR: Hannibal Lecter. I love a compellingly written, fully-fleshed-out, and totally repulsive bad guy. I watched the film first, and then went back and read the Thomas Harris novels. I’m really sensitive to horror and have never found myself to be fully desensitized to suffering, even when that suffering is fictionalized. I feel like there was something about the kind of insight that Lecter had, psychologically, that even made his more truly horrific actions feel un-wasted—like he had carefully considered and sublimated his cruelty, which made even the really gruesome stuff in that book feel really elegant. It was a watershed moment for me, when it came to fiction that contained acts of violence—I could suddenly stomach violence, if it truly felt like the violence served an artistic purpose. I think this is part of what has fundamentally informed my relationship to art in general, which I see as running parallel to civic life and sometimes crossing over into it, but having its own set of rules and conventions. I just love the character very much. I’m sure that has something to do with being influenced by Anthony Hopkins’s portrayal in the film before I read the book.

Tara McGowan-Ross is an urban Mi’kmaw multidisciplinary artist and writer. She is the host of Drawn & Quarterly’s Indigenous Literatures Book Club, a critic of experimental and independent Montreal theatre, and an editor for Insomniac Press. She is the author of Girth and Scorpion Season. She lives in Montreal.

Nothing Will Be Different is available here on All Lit Up > > > 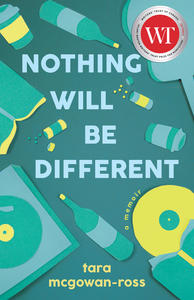 Nothing Will Be Different

October 23, 2019
We Asked: Where's Your Favourite Place to Summer Read?