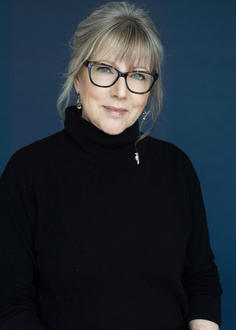 In her latest novel,  Even So (Dundurn Press), Lauren B. Davis explores the challenge and necessity of loving difficult people. Lauren joins us in this edition of Writer's Block to talk more about why difficult people are worth caring about and the rewarding moment when her characters—even messy ones—come to life in ways that offer us a chance to heal our own imperfections.

All Lit Up: What was your most rewarding moment as a writer?

Lauren B. Davis: There are any number of amazing moments during the writing process itself—when a character comes to life, when the ending appears in one’s mind, when the first sentence comes together, and when the last one does. There are also many great moments aside from the actual writing, like the first time a story was accepted for publication (thanks to Barry Callaghan at Exile), or when I found my agent, or the first publishing contract. Still, there was this one moment, when the late great Robert Adams picked my novel The Stubborn Season for his TVO program, Big Ideas (you can watch it here). I was in the audience one night with my agent, Dean Cooke; my husband, Ron; and literary critic Donna Nurse Bailey. I felt like I’d just won an Oscar.

The greater part of most writers’ lives, or at least this writer’s life, is spent in solitude, without really knowing if our intentions for a book have been understood by readers, so witnessing someone as wise and well-read as Robert Adams lecture such a large audience (400-500 people over the course of eight nights!) about what the novel meant and why it mattered was a deeply rewarding, even pivotal moment for me.

LBD: Hester Prynne from Nathaniel Hawthorne’s The Scarlet Letter. Her strength of character, her refusal to bow before hypocrisy, her self-containment! Hester Prynne stands clear and firm and silent in her truth, having transformed the red “S” (for sinner), sewn onto her clothing into something beautiful by embellishing it with golden embroidery. What an extraordinarily complex character she is—beautiful, frightening to men, a mirror to hypocrites, both a sinner and a holy person, both a conformist and a rule-breaker, and a wonderful example of what it means to be both/and, rather than either/or. She’s one of the first female protagonists, and arguably one of the most important, in North American literature.

LBD: I think it may be a kind of mental illness. Ha! But wait, is that a joke? I’m not sure. The truth is that writing has been an obsessive, compulsive force in my life since my early teens when I began trying to make sense of a world I perceived as being chaotic, dangerous, confusing, and a place I where I didn’t fit in. I didn’t have siblings, and my parents were caught up in their own dramas, so I turned inward, to books, and to telling myself stories. I created characters and put them in situations like my own to help me figure out what motivated people, what things like redemption, forgiveness, and compassion really meant, and to discover what I thought about things. Hopefully my writing improved over the years, but I think my reasons for writing remain the same.

ALU:Have you experienced writer's block? What did you do about it?

LBD: Yup. Been there. I think there are two kinds of block.

One is what happens during a work-in-progress. That one, I’ve found, is cured by backing out to the last crossroads choice a character had to make and going in a different direction. Repeat as necessary. It’s all about finding out what’s not working in the narrative structure and fixing it. It can be hard work, and it can take a long time. A number of beginning writers simply quit at this juncture.

The other kind is more problematic, and I’ve suffered it more than once. It’s when no words will come, when no story seems worthwhile, when one is convinced whatever mediocre talent one once had has dried up. I have a dear friend, Sister Rita, who has talked about the silence of God, and how this is the most terrifying, anguished condition. Writer’s block is another holy/unholy silence. I am a person of faith—not traditional religion, but faith nonetheless—and I believe writing is my vocation. Not being able to write feels as though I am cut off from the Sacred, and that I’m not being faithful to that vocation. It’s agony. What did I do? I sat there and felt all the pain and I waited, trying to keep faith that there would eventually be a glimmer in the darkest of nights. Try to remember that “this, too, shall pass.” If I found even the tiniest, weakest of sentences, I tucked it away on the page and cherished it, waiting for the next. It took a long time, but I made it out each time...so far. 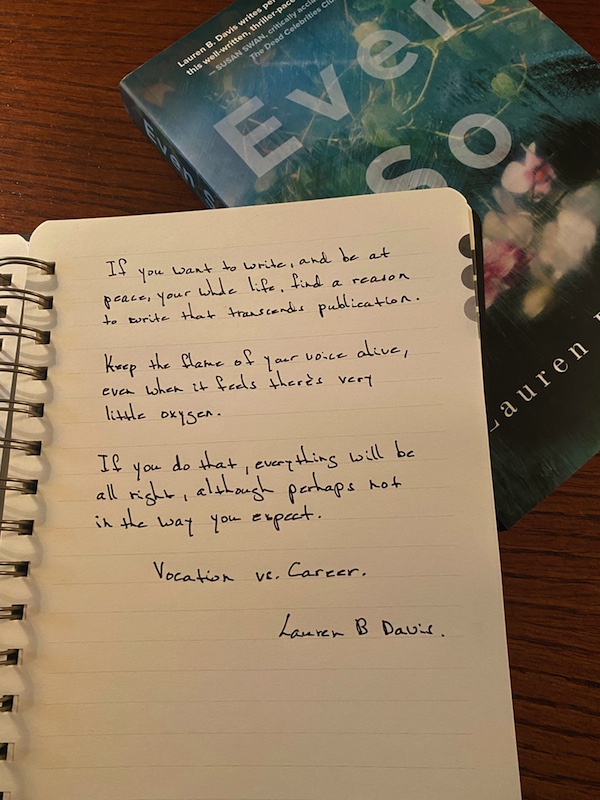 Lauren's best writing advice: " If you want to write, and be at peace, your whole life, find a reason to write that transcends publication. Keep the flame of your voice alive, even when it feels like there's very little oxygen. If you do that, everything will be all right, although perhaps not in the way you expect. Vocation vs. Career."

LBD: There is a fundamental question I ask myself with every book, and I suppose that’s the question I wish someone would ask me.

For Even So, I’m asking why I (or anyone) should care for difficult, unlikeable people. For readers, this might be translated to, why should I read about a challenging character? Especially these days when we’re told all characters must be ‘likeable.’

Answer: Well, first off, I believe love should not be dangled as a reward for good behavior. We love, and are loved, because love is a tool of mutual healing.

Many people we’ll come across during our lives are challenging and hard as it may be to hear, we are doubtless challenging to some people ourselves. When we engage with a difficult character, a character who holds beliefs, or does things of which we disapprove, we may just be engaging with a part of ourselves, even if it’s a hidden, shadow, part.

Further, don’t we all need an angel to wrestle with now and then? Sometimes, don’t we learn more, about ourselves especially, by wrestling with that angel than we do sitting around sipping oolong with people who never twist us into unfamiliar shapes? What do we know of forgiveness, for example, unless we experience it from both sides, as the one who forgives as well as the one who is forgiven?

It’s through that engagement not only that mutual healing takes place (the most important kind), and if I can learn more about that, I’m all for it. Besides, just as no human is completely unlikeable, no character should be either. I love my characters, all of them. Perhaps I love the messy ones most of all, since I see myself in them most clearly.

Lauren B. Davis is the author of The Grimoire of Kensington Market, Against a Darkening Sky, The Empty Room, Our Daily Bread, and The Radiant City. She has been longlisted for the Giller Prize and the ReLit Awards, and shortlisted for the Writers’ Trust Fiction Prize. Lauren lives in Princeton, New Jersey. Even So is her latest novel, available now on All Lit Up.

Even So is available here on All Lit Up >>>

Grimoire of Kensington Market, The 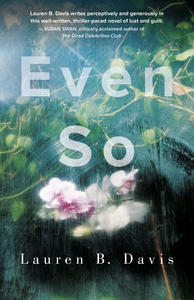 By Lauren B. Davis