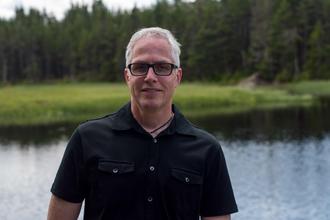 Crime fiction writer D.B. Carew—whose most recent thrillers include The Killer Trail and The Weight of Blood (NeWest Press)—tells us about how he literally ran into the idea for his first novel, his favourite fictional character, unexpected writing inspiration, and more.

D.B. Carew: Running has always been helpful for me in terms of opening a valve for creativity. During a run several years ago, I found a cell phone on top of freshly fallen snow. As I attempted to connect the phone to its owner, my mind started wandering and wondering about various criminal scenarios involving the phone. By the time I finished my run, I’d managed to freak myself out, constantly looking over my shoulder. And I also thought I had the beginning to a story. That story eventually resulted in The Killer Trail, which was published in May 2014, and its follow-up, The Weight of Blood, was released November 1, 2020. 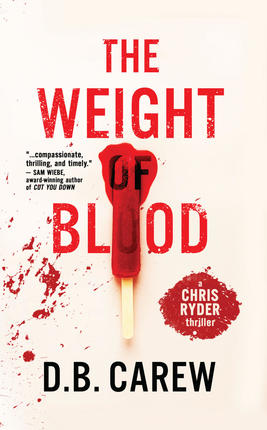 DBC: One thing I’ve learned to appreciate is the fact that inspiration comes from unexpected places, at unexpected times. I’ve been awakened at night by ideas for new scenes or dialogue. I used to have a note pad next to my bed in the event that ideas came to me at three in the morning. In recent years, that note pad has been replaced by my iPhone. Sometimes those ideas don’t amount to much, while at other times, a dream I’ve had finds its way right into a book, as occurred in The Weight of Blood.

Another ritual involves daily walks on my favourite local trail. There’s something about physical movement that lends itself to creativity. So, it’s not uncommon to find me walking and talking into my iPhone. 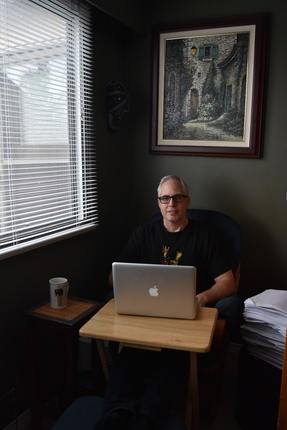 I used to have a "writer’s den" in the basement of our house, which I liked because it was nestled away and afforded me privacy and a dedicated space in which to write. About six months ago, my 19-year old son took a liking to the room for a similar reason-privacy. I was in no rush to see my son leave our home, so I swapped rooms with him.

I did what writers do, adjust. I adjusted to my new "writer’s den" and actually came to like it more than my original writing space.

And then, my wife and I decided to take on a much needed reno of our kitchen. As a result, my writing room has become a temporary storage area for all of our kitchen supplies.

So, I’ve done what writers do, adjust. I have what I need most. A chair to sit on, a table to write on, and my laptop!

DBC: The toughest part of being a writer, for me, is finding time to write. I work full time as a social worker at a forensic psychiatric hospital. My job often serves as inspiration for my writing, and for that I’m grateful. But working forty hours a week leaves little time for writing. I also have a full family life. I’m blessed to have a wonderful family, including a patient and supportive wife, and two amazing children. It’s a happy and fulfilling life, and I wouldn’t trade this for the world. So my challenge becomes making the most of the available time I have for writing. It’s a quality vs. quantity situation. For me, true success and happiness is measured by a harmonious balance in my work, family, and writing life.

DBC: I first read Stephen King’s book, On Writing in March 2001 when I received it as a birthday gift. I’ve read it about three times since then, and each time I come away with new insights and perspectives on writing and life.

DBC: I’d have to say Michael Connelly’s Harry Bosch by the fact that I’ve read more books in that series than any other.

When I first heard a TV series was being produced featuring Bosch I resisted watching for the first season, mostly out of fear the character playing Bosch, Titus Welliver, wouldn’t match the Bosch I’d imagined through reading the books over all those years. But now, it’s hard to imagine any other character playing Bosch and I enjoy binge-watching when new seasons are released.

ALU: What advice would you give to aspiring writers?

DBC: WRITE. One can read numerous books on the craft of writing. One can attend several courses, workshops, writing retreats and conferences dedicated to writing. And it’s essential to read as much as one can. All of these strategies are important. But in the end, it comes down to one thing—writing. Writing, revising, refining, and writing again. 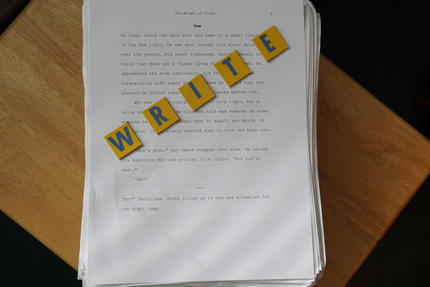 DBC: I’m currently working on the follow up to The Weight of Blood. When I first set out to write my first book, The Killer Trail, I envisioned it as book one in a trilogy called Fighting Darkness. I eventually dropped Fighting Darkness from the title, but the original vision of the story being told over the course of three books has remained.

I live in Coquitlam, British Columbia which is a suburb about thirty minutes outside of Vancouver. One of the things I like most about where I live is that I’m a few short minutes away from my favourite trail where I walk or run seven days a week. It was at this park that I found a cell phone ten years ago which helped launch my writing career.

For over twenty years I’ve worked as a social worker at a provincial forensic psychiatric hospital, which serves as inspiration for my writing. I combined the discovery of the phone and the setting of my favourite park in my first book, The Killer Trail.

Dogs have always been a part of my life. The fifth member of our family is Sophie, a cocker spaniel who thinks and acts as though she’s the queen of our home.

I’ve also always been influenced by music. If I had to narrow down my three favourite bands, I’d list U2, Pearl Jam and The Tragically Hip. All three bands create incredible music, and have a strong social conscience, lending their voices to social causes, which appeals to the social worker advocate in me.

Thanks so much to D.B for answering our questions, and to Claire Kelly at NeWest Press for making the connection.  The Weight of Blood and  The Killer Trail are available on All Lit Up. 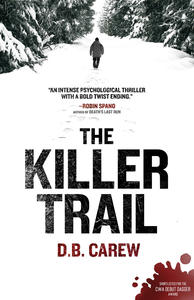