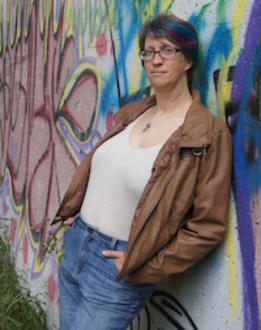 Trudy Morgan-Cole, author of the forthcoming book,  A Roll of the Bones (Breakwater Books), joins us on the ALU blog to chat about everything from writing her first book at age 6 and bookclub butterflies, to teleportation and time traveling through historical fiction.

Trudy Morgan-Cole: I honestly have no recollection of not wanting to be a writer. I was read to a lot when I was little, and I became an early reader, and I remember as a small child listening to conversations and mentally adding speech tags – like if my mom said, “Pick up your toys!” in my head I would add something like “she said sternly.” So clearly, books were more real to me than the actual world I was living in.

I wrote my first novel when I was six. It was called “Sixy,” and was about a little girl who was also six, but who also had six names, so went by the nickname, “Sixy.” It was three or four (or maybe six?) pages stapled together, with illustrations. I never looked back from that.

TMC: I read a lot, in many different genres, and I try to challenge myself by trying new things, seeking out more diverse books, reading outside my comfort zone. But my comfort reads are always historical fiction. That’s what’s always going to grab my eye in the bookstore aisle – a book set at almost any era and in any location in the past, especially if it’s about a woman’s experience, because I’ve always been intrigued by how women’s stories hide around the margins of official history.

I want a book that will essentially allow me to time travel for a few hours. I read and write historical fiction because so far, nobody’s invented a reliable means of time travel. Until the Doctor whisks by in the TARDIS to pick me up and take me journeying back through time, I’ll always be a historical fiction addict.

TMC: My most-read book is Gaudy Night, by Dorothy L. Sayers. It’s a Golden Age detective novel written in the 1930s, featuring her aristocratic detective Lord Peter Wimsey. Gaudy Night is the novel in which Lord Peter’s romance with mystery novelist Harriet Vane, which has unfolded over a few books, finally comes to fruition. Lord Peter and Harriet are two of my favourite literary characters, and their romance is, to me, the best fictional romance in English literature, bar none. It’s a thinking woman’s romance, a book that portrays a relationship between equals in an era when that was hardly the norm, and it’s a story that truly grapples with the question of whether you can give your heart to another person and still remain true to yourself and your own dreams. Oh, and it’s set in a women’s college in Oxford, so, bonus points for setting.

I first read this book when I was 16 and it’s possible that it might have warped my romantic expectations for many years, since I was secretly hoping that a brilliant, erudite, wealthy, aristocratic English detective was somewhere on the horizon. But I eventually got over that. I never did get over the book itself, and still re-read it every year or two.

TMC: No odd ones. I mean, I like to go to my favourite coffee shop, sit in a comfy chair with a mocha and a pastry, and write for a few hours on my laptop – but that hardly makes me unique. Without writers, I wonder how coffee shops would stay in business?

Left: My idealized workspace – everything tidy and organized on my dining-room table. Right: More typically, my actual workspace: at a coffee shop.

TMC: My most rewarding moment as a writer happens over and over, when I get invited to visit book clubs who’ve read one of my books and are discussing it. It’s so different from the routine of doing signings at a bookstore, or readings in front of a group of people who don’t know much about your book. I don’t like the feeling that I have to “sell” my book to people – I’m not great at self-promotion, though I accept that that’s part of the writer’s job – but at a book club you’re in the company of people who’ve already read the book and have opinions about it. And those don’t even always have to be positive opinions, though it’s great if they are. Once at a book club, a reader told me she wanted to slap one of my characters across the face. I loved that – that something I wrote could seem real enough to elicit that reaction.

I write about things and people that fascinate me, and they’re so real and alive for me while I’m writing, and then when the book is finished it’s like they’re no longer real. It’s as if I’ve been collecting butterflies because they’re so beautiful and vibrant, but then I put them in a glass case and they don’t move anymore. When I visit a book club, the butterflies are free for a little while. The characters come alive again when people talk about them and care about them. I love that.

Plus, there are almost always great snacks at book clubs. 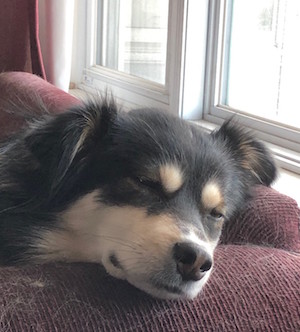 My favourite co-worker (admittedly, I am doing most of the work). She doesn’t come to the coffee shop though.

TMC: I’ve just finished a book called A Roll of the Bones, which is the first volume in a trilogy of novels about a group of people who settle at Cupids, Newfoundland in 1610-1612 – the first permanent English settlement on the island. That’s coming out this fall, and I’ve started researching the next book in the series. 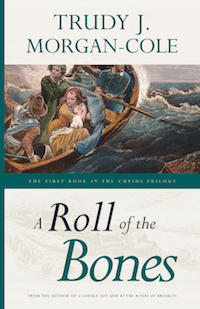 A Roll of the Bones is the first in a trilogy of novels wrestling with the realities of colonization.

Also, I’m playing around (pun intended) with learning to write for the stage; I have a short play I wrote in the St. John’s Short Plays festival this year, which is cool. I love trying new things. 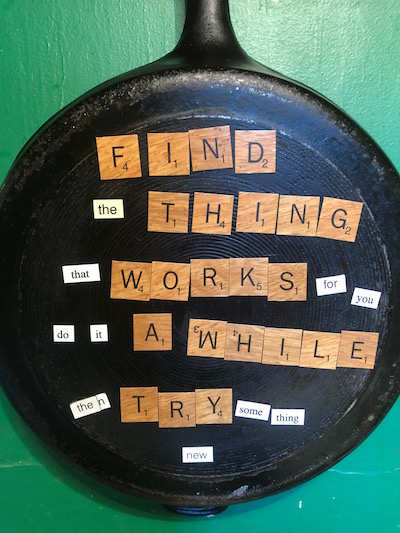 ALU: If you had one superpower, what would it be?

TMC: Teleportation would be cool, largely because I like to travel but I don’t love flying, and also living on the island of Newfoundland it’s quite time-consuming and expensive to go anywhere. If I could teleport to, say, London or New York for a weekend, see a few shows and teleport back home, that’d save a lot of money, time and trouble. I suppose that’s more of a sci-fi technology than a superpower, isn’t it? 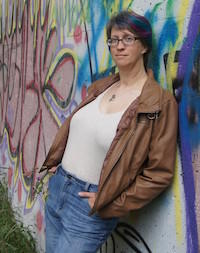 Trudy Morgan-Cole is a “hardcore Rabbittownie” from the centre of St. John’s, Newfoundland, where she’s been living for most of half a century. She lives in the house next door to the one she grew up in. She and her husband have more-or-less successfully raised two kids to near-adulthood, and they own the world’s most beautiful rescue dog (this is a fact, not an opinion). Along with writing historical fiction, Trudy teaches English and Social Studies to adult learners, and is constantly awed by the brilliance, courage and resilience of her students. She loves to travel, especially to any big city with busy streets and lots of live theatre. She will also travel (and has travelled) a long way to see Bruce Springsteen, the Mountain Goats, or Weird Al Yankovic in concert.

Some of Trudy's previous works include:

Most Anything You Please (Breakwater Books, 2017)

By The Rivers of Brooklyn (Breakwater Books, 2009)

Connect with Trudy on the interwebz at:

and check out her book review blog: http://compulsiveoverreader.wordpress.com

A special thank you to Samantha at Breakwater Books and to Trudy for giving us a behind the scenes glimpse at her work and inspiration as a writer.

Sign up to get a reminder on October 14th when Trudy's newest novel A Roll of the Bones will be available for purchase on All Lit Up! 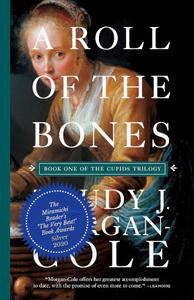 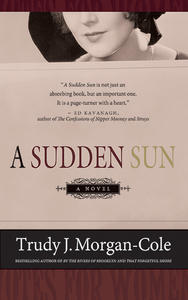