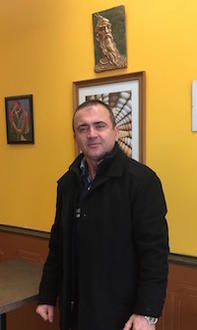 Growing up in communist Albania, Perparim Kapllani, author of The The Thin Line (Mawenzi House Publishers) discovered his love for reading and poetry. Perparim joins us on the blog to talk more about the influence of his own favourite authors and books and how his writing is born out of the quiet moments of a full-time job running his own pizzeria in Toronto.

Perparim Kapllani: There have been moments from my early childhood when the alarm sirens sounded all over the city, and residents were rushing to underground bunkers and tunnels to defend themselves from the imaginary attacks of the capitalist-revisionist world. The then communist system in Albania prepared the civilian population on how to protect themselves from a pervading air attack. All the city lights switched off, waiting for a second siren, announcing the departure of the danger. In these moments, my father used to recite poetry to me under the pale light of a candle. My body was torn by his intimacy and my eyes were filled with tears. I was only a seven-year-old boy when I first encountered poetry. Later in elementary school, a group of teachers gave me a collection of poems of the outstanding Albanian poet Migjeni, as a gift for my birthday. By reading his verses about misery, I realized that I had a natural connection with literature and not just that.

PK: I grew up in Albania, reading "Oh you mountains of Albania" by Naim Frasheri, who was one of the most prominent figures of the Albanian National Awakening, a poet and a writer who made a nation. Ismail Kadare, Dritero Agolli, Ali Abdihoxha, Mitrush Kuteli, Migjeni, Fatos Arapi, Xhevahir Spahiu, Bardhyl Londo, Ndre Mjeda, Pashko Vasa and many other writers were the inspiration during the communist isolation of my country. Their works were like little windows for my generation. I wanted to write as powerful as I could, taking my craft very seriously and polishing my writing as much as I could.

PK: I was a teenager when I started to read. I remember that I used to read until three o'clock in the morning. I loved reading novels like The Last of the Mohicans, The General of the Dead Army, David Copperfield, The Old Man and the Sea, and many other stories. The impact on me happened in later days, when I read Dolan's Cadillac, a story written by Stephen King about a man who takes revenge for the death of his wife. I used the same point of view and wrote The Hunter, which was selected as one of the best novellas for 2015 by Quattro Books. It was shortlisted! My favorite books are Devil Wears Prada by Lauren Weisberger, Madame Bovary written by French writer Gustave Flaubert, The Old Man and the Sea by Ernest Hemingway, War and Peace by Leo Tolstoy, General of the Dead Army by Ismail Kadare. I am really sorry that I cannot mention all my favourite books, but they are so many and you asked me if I had one book that I've gone back and read several times ... each one of them is unique on its own. These are stories full of life. The characters are so real, as they do not let you down until you turn the last page.

PK: I have no rule, except for the fact that I am extremely busy with work. I run a one man show pizzeria on a daily basis. There are many moments where I have nothing to do so I try to write. When my tired body or my brain does not obey me, then I follow a simple rule: just sit in front of the computer and think.

PK: I write because I have a need to express my deepest feelings. Definitely I don’t write for money. I would have filed for bankruptcy if I had tried making money by selling books. Writing is some kind of shower I take every day. Some few previous moment alone with me, myself and I, makes me a better person and gives the feeling that I am reborn like the phoenix from the ashes.

PK: Will this novel compete with the other books for Kosovo in the market? I did a simple search and found that The Thin Line is one of the rare 'fiction' books written for Kosovo. Kadare's novel Elegy for Kosovo has been published, I’m not kidding you, 14 years ago and has been subject to war in Fushe Kosova in 1389. The Hemingway Book Club of Kosovo is simply a memoir. My Cat Yugoslavia is a novel for immigrants in Finland, while Beyond the Mountains of the Damned is nonfiction. Blood On My Hands is also a memoir. I'm not afraid of the competition. Competition is healthier and leads the literature forward. 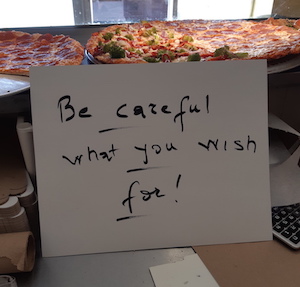 PK: Have you ever tried to write in a foreign language? English is my second language and that is the toughest part. First, I’ll write in Albanian and then translate it into English. The process of creation does not end there. The queue has editors .... I have learned English at the Scanderbeg Academy where I was taught by such honorable ladies like Sashenka Bezhani, who translates Kinostudio movies. Teaching at the military school was an extraordinarily high level. Perhaps 20 years of being in North America has helped me to improve English, a process that will continue to the end. Occasionally, words come straight in English. Thinking or dreaming in English is a process that will continue in the long run. 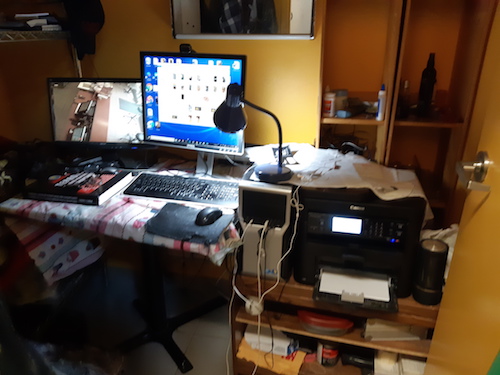 I was born in Elbasan, Albania and I have lived in Toronto since November 2000, where I run my own pizza shop, Albany Pizza on Dundas St. W and Lansdowne Ave. I have been working there for seven days a week, open to close, for eleven years straight. My favourite food is definitely my own pizza, I will never get sick and tired of it and I eat it almost every day. It's thin crust, with toppings that go right to the edge, you should come in for a slice one day. Lately, my musical interests include Katy Perry, Dua Lipa, Miley Cyrus and Eminem. I love to travel to Albania and Italy! My parents, two brothers and three sisters go back and forth to these neighboring countries. I’m always looking to spend more time with my family, and can’t wait to spend six days in Albania and five days in Verona, Italy soon.

A special thank you to Maria at Mawenzi House and to Perparim Kapllani for chatting with us. 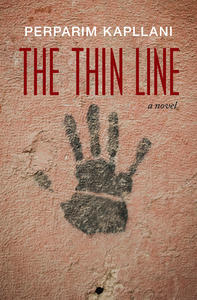