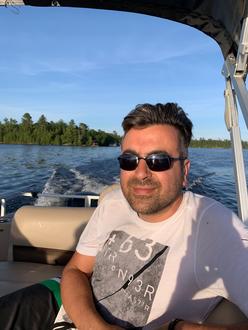 We electronically sat down with Dean Serravalle, author of multiple novels including the latest Where I Fall, Where She Rises (Inanna Publications) to ask our Proust-style questions about stand-out writing moments (spoiler: the story includes police and a burned-down restaurant), rewarding moments in writing, and love at first read.

Dean Serravalle: Yes, there is a standout experience that made me decide I wanted to be a writer. I liked a girl in high school so I wrote her a poem but sent it to her house anonymously. She didn't respond, so I sent another, this time suggesting that she leave her response at the back of a burned-down restaurant. I rode my bicycle there and two police cars cornered me. They said they had hired experts to read and analyze my poems, and that the girl's sister had been stalked once before, which is why they conducted an investigation into the anonymous letter. The experts, including university professors, concluded that I must have copied the poems from a book of poetry. One went as far to say that they were too polished to be amateur. Even though I was set free and not arrested, I had to agree to disclose my name to the girl, which was mortifying to me at the time. She gave me a sympathy card, so to speak, but expressed how impressed she was by the poems. After getting over the life-altering embarrassment, I found consolation in the fact that everyone involved respected the quality of my writing, so it was my first validation as a writer. Lol.

DS: The most surprising thing about being a writer is when an idea for a story interrupts your train of thought. If it is good, with some potential, it creates the reaction of love at first sight. Your skin starts to tingle and everything that you are doing at the moment, seems to synchronize to the rhythm of this idea. It's pretty cosmic, to me, and so involuntary. And yet, the timing of it always surprises me. I marvel at its ability to alter my lightness of thought. And the effect is breathing the release of it once I begin talking about it, or jotting down notes in order to pin it down and retain it. 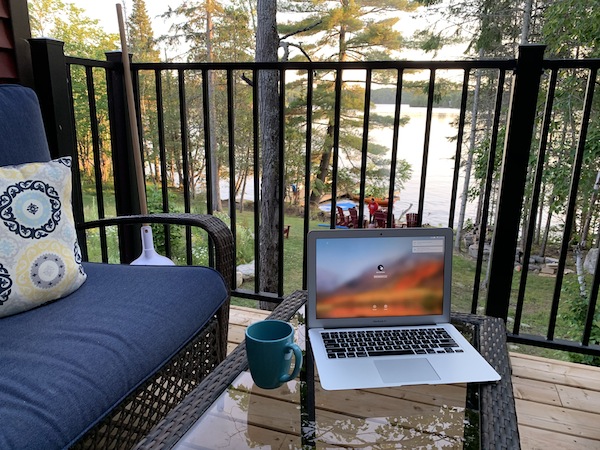 DS: Why do I write? I am overly sensitive to everything I encounter, experience, or think about. I think most writers or artists are. However, I absorb my observations into this hidden memory sponge that gets so wet and heavy, that it begins to turn ugly with black mold if I don't drain it. And then I write, or release the density of this sponge onto paper because I feel this insatiable need to make these observations relevant in a narrative. And it's not all clear when I do spill everything onto paper. Some of that ugliness, or the raw nature of the creativity seeps out, and I really enjoy how it makes me feel to get to the core of all that makes us human, tragic or heroic, and often both.

DS: My most rewarding moment as a writer was writing a poem about my father on a napkin under time pressure in the funeral parlour because I couldn't stomach them using one of their "selections" for his printed funeral cards.

DS: The toughest part about being a writer is acknowledging that your voice is one of many in a wilderness often overcrowded by the same sounds and screams.

Below is a text exchange between Dean and friend that turns into some gem-like advice:

Dean Serravalle is a poor man's "renaissance man." He finds himself writing in every one of his professional lives, exclusive but not limited to teaching, freelance copywriting for his brother's Real Estate Brokerage, designing online writing courses, editing Revel Style Magazine, selling real estate, public speaking, and sometimes writing heroic panegyrics for his friend's online dating profiles. He is a proud father of four children, five if you include his new mini golden doodle Gigi. He loves his wife, dislikes her temper, but adores her fire. He is a recent convert to northern life at the lake, and often surprises himself by how well his soft hands have assimilated into cottage life. Some of his fondest memories come from traveling Europe and aspiring to live there part-time one day, since he is a dual citizen. Finally, Dean's musical preferences emerge from his desperate addiction to nostalgic moments from his past, galvanized further by '80s one-hit wonders.

Thanks to Nathaniel and Inanna Publications for connecting us with Dean, and to Dean for answering our questions! For more writer's block, click here. To purchase a copy of Dean's newest novel Where I Fall, Where She Rises, click here. 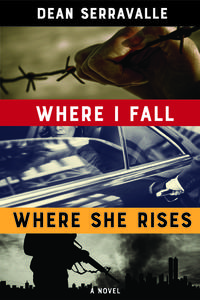 Where I Fall, Where She Rises