When multi-talented author Maureen Medved wrote her first novel The Tracey Fragments she soon found an opportunity to write its film adaptation, which opened at the Berlin International Film Festival and won the Manfred Salzeber Prize for a film that "broadens the boundaries of cinema today." Today she joins us to talk about her influences—from J.D. Salinger to Toni Morrison—that inform her latest novel Black Star (Anvil Press) and the toughest part of being a writer.

Maureen Medved: Winnipeg. My early twenties. Summer. Twilight. Mosquitos buzzing. Wellington Crescent. The sun struggling and dying in shiny mansion windows. Once I had reached the foot of the Maryland Bridge, for the first time ever, and out of nowhere, the thought flashed: I want to be a writer.  Not the image of a writer. I had no interest in that. Nor did I even know what that would mean (not like, say, the image of a rock star or an accountant, both of which were stunningly clear to me). I just wanted to put pen to paper. I had stories to tell.

ALU: Which writers have influenced you or had the most impact on your writing?

MM: I’d say a merging of several different approaches to narrative: Flannery O’Connor, Joyce Carol Oates, Mary Gaitskill, Toni Morrison, Denis Johnson, Isaac Bashevis Singer, Franz Kafka, Bruno Schulz, Jorge Luis Borges, Roberto Bolano, William Faulkner, Hubert Selby, Jr. and Kathy Acker. I view those writers along a narrative spectrum (that would also include other writers whose work I admire) as major influences. But if I had to be honest, Salinger’s Catcher in the Rye was my earliest influence. It has a confessional, voice-driven quality that I still admire. But it’s also very cinematic. I believe this kind of writing has a major influence on my current narrative style. The first time, I’d picked up the strange little burgundy covered edition from the shelf at home right next to the Golden Book children’s set and the Encyclopaedia Britannica. I’d already ravaged both like a starving dog. I recall not quite getting what Salinger was on about (I think I was eight or nine at the time) but thinking, this guy is a genius. He’s telling me his whole life story. It’s like he’s really here, chatting with me about his urbane New York experiences. I grew up in Winnipeg and recall thinking Holden Caulfield had it better than I did, hanging around in NYC, the cabs and bars and such. And although there were many words in the book I didn’t understand, I felt here finally is someone I can relate to. Here is a fellow who is not speaking down to me. At eight-years-old, that was high on my priority list. I remember thinking, this book is far more interesting than Little Women, Tanglewood Tales, and Das Kapital. We didn’t have an enormous selection of literature in the house, so I must have read Catcher about one hundred times as a child. I’m pretty sure I wasn’t yet allowed to check out the adult books at the library, but I’d sneak around there anyway. TV in my day didn’t have a lot to offer, so reading plays was also a huge influence. Williams, Albee, Miller. My father loved theatre, and we’d read plays and discuss them at the dinner table. It was either that or hockey. 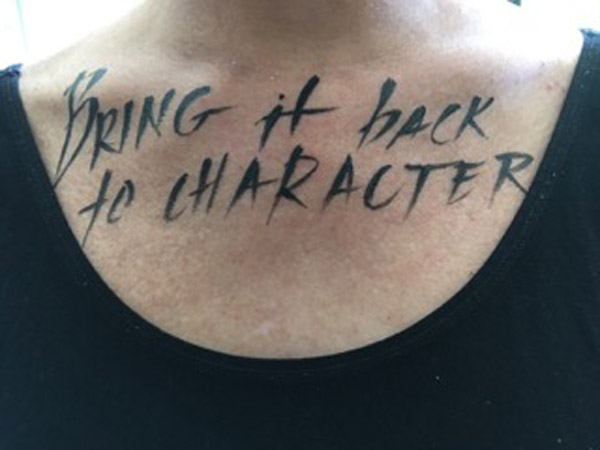 Maureen's best writing advice: "Bring it back to character."

MM: Jesus’ Son by Denis Johnson. That little gem is a winner on so many levels.

MM: I’m working on a book of nonfiction and a novel.

MM: There are storytellers on both sides of the family. My father loved to both tell and listen to stories and he was intensely curious and interested in people and what motivated them. But on the other side of the family, my mother’s father was also an amazing storyteller and apparently could completely own the room. I heard this firsthand from my father who said witnessing his father-in-law in action was awe-inspiring. I figured it must be true because few people have anything that effusive to say about their in-laws. I also have a deep desire to express my view of the world creatively with words. I’ve been doing some version of that my whole life—whether it’s telling stories at parties or on the page. But I’d say even beyond all this, I’m fascinated by how the stories are told—the sheer craft and mechanics of it. I can roll that around between my fingers for hours and days. How does someone tell a story? Or how could someone tell a story? And why would they tell a story that way? What are the other ways that story could be told? I only really understood my fascination with all this once I was deep in the process already. It’s only in the doing of it, the wading through those murky fields, that I realized how much I loved the mechanics of story and the way stories are told. I also happen to love long hours of solitude. The writing life suits me. The urban hermit is what a friend once called me back in the days when I could simply pull the phone out of the wall. In the old days that was good for the writing, but bad for my parents. 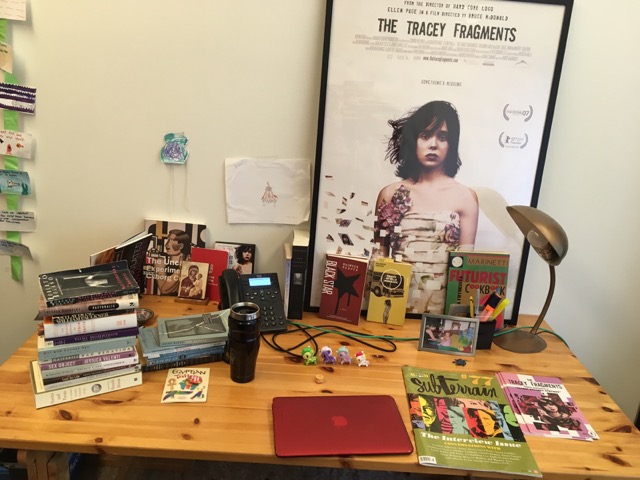 Maureen's workspace (featuring her novel Black Star and the movie poster for The Tracey Fragments for which she wrote the screenplay).

MM: Wake up. Where’s the family? Out? Love the family, but—you know—yay! Coffee. Laptop. Five hundred to one thousand words that advance story and rise from character. Words that really chug the plot along. Getting that kind of traction and engagement with the plot. A few unexpected literary surprises thrown in for good measure. Some of those like—wow!—where did that come from moments that you can’t force. Once that all happens (and that’s a really great and awesome day) the rest is golden. Almost anything could happen after that, and I’d be good.

MM: I had a long-standing rare blood disease that put me in hospital many times over the last twenty years. It only recently got diagnosed and treated. Therefore, the most obvious title would be:

Has Anybody Seen My iPhone?

MM: Knowing that I am kind of like an explorer without a map or a real sense of the shape of the world. What’s going to happen once I get on that ship or in that car or whatever? Will I make it all the way through? What will I find once I get there? It’s a terrifying and exhilarating journey. Then having the courage to keep going when I’m writing about material that is maybe bleak, disturbing, or about characters with ideas that go massively against my world view. I’m always interested in people who don’t quite fit in. I’m curious about them and I always wonder about their quiet introspection. A tension mounts inside me as I wait, watch, and listen for their stories to unravel. But often it’s hard on me. I find myself stopping, then starting again, until I see the story through. Often by the end they have something important to share with me, something I didn’t expect to hear, but once I’ve heard it, I’m super glad I did. Through that process, I’ve learned something about others and myself.

Maureen Medved lives in Vancouver’s West End with her partner and daughter in a four story building a few blocks away from English Bay and the Pacific Ocean where she once saw a seal basking on a rock.  She is Associate Professor in the Creative Writing Program at the University of British Columbia as well as a film reviewer for Herizons. Her favourite go-to food is either anything at Thai Basil or black rice spinach sushi at Akira. Her cats are her beloved tabbies, Flipper (named for the band and recently deceased, but not forgotten!) and Kato. Maureen loves to body surf on the beaches of Oahu. Her favourite music is diverse—from early punk to hip hop and beyond to jazz, classical, and show tunes. She loves stand up comedy, podcasts, movies and television, and has cultivated a long term obsession with both coffee and popular culture and spends much time surfing the net while sipping on cortados and Cuban espresso.

Thanks so much to Maureen for her thoughtful answers to our questions, and to Cara at Anvil Press for connecting us! Black Star is available now. For more Writer's Block, click here. 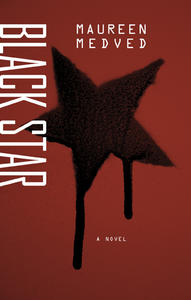