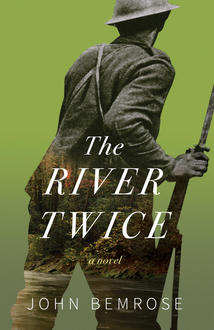 Giller-nominated writer John Bemrose tells us about the setting of his new novel,  The River Twice (Thistledown Press), Paris, Ontario - which also happens to be his boyhood home. See how Paris lives up to its name as "the prettiest town in Canada", and the uglier side of war and the trauma it inflicts on Paris's population following the Great War's conclusion in 1918.

The town of Paris presents an anomaly in the flat southwestern Ontario plain. Steep hills, their slopes covered in forest, loom over the downtown business section. Two rivers, the Grand and the Nith, converge at their feet, making Paris a place of bridges and watery views. The backs of stores plunge straight to the Grand, as in some ancient Italian riverside town, while other hills, sloping from the north, channel the rivers into intimate contact with several neighbourhoods. A nineteenth-century traveller called Paris “the prettiest town in Canada,” a compliment repeated on a sign during my 1950’s boyhood.

My family lived in Paris for over a century. Growing up, I was imbued with its stories, related to me by my parents and grandparents. Little wonder, perhaps, that the place has inspired the setting for two of my three novels. My latest, The River Twice, tells a story of the First World War era. It is partly a tale of the battlefields, but its main focus is the trauma suffered by the people of a small town, as seen through the lens of a single family. When Ted Whitfield is invalided home in the spring of 1918, his PTSD proves an upsetting challenge to his wife and her family, who share a large old house in the leafy north end. 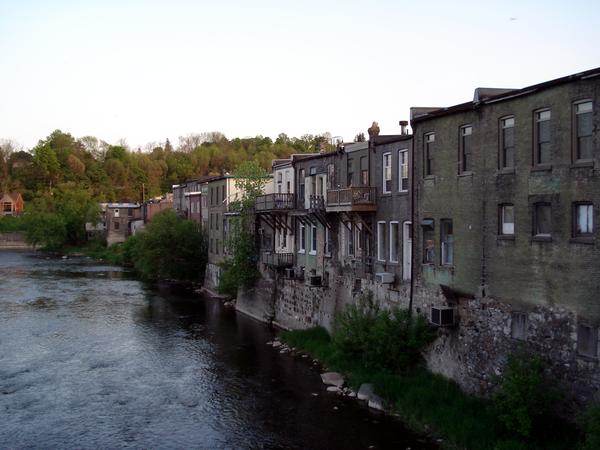 A photo of the Italian-style buildings John describes abutting the Grand River in Paris, ON. [Photo by Wikimedia Commons user Balcer, used under a Creative Commons License.]

The novel draws heavily on the geography, architecture and history of Paris. During the Great War, the population of Paris was less than four thousand. But along with the surrounding farms, it sent more than 600 soldiers to the trenches. Of these, 90 young men were killed—huge losses for a place so small. This collective trauma is mirrored in the unnamed town at the novel’s heart. The effects of PTSD (or shell shock as it was called then) plague not only those soldiers who have borne the ordeals of war, but also spread through their families and community. As I completed the final draft of the novel during the covid pandemic’s first year, I had the curious sense I was writing about contemporary events. For like the citizens of the Great War, whose sons, brothers and husbands were fighting in Europe, we too faced incomprehensible threats to the well-being and survival of ourselves and our loved ones.

People living with PTSD have sought relief from their suffering in a variety of ways. Today we have therapies that in 1918 were in their infancy, and many people were forced to turn to alcohol, drugs, or the release of violent emotion. In The River Twice, some of the principal characters turn to nature, using it in an almost Wordsworthian sense, walking miles to calm frazzled nerves and escape their demons. And so here, again, mirrored in the novel, the natural beauty of Paris plays its part. If, some warm evening, you take the dyke-top path from William Street to the dam on the Grand River, you will be following in the footsteps of my characters and knowing, like them, the immemorial consolation of the place. 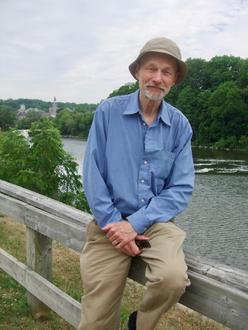 John Bemrose’s first novel, The Island Walkers, was a national bestseller, a finalist for The Giller Prize, and longlisted for the Man Booker Prize. He is also a well-known arts journalist who has published reviews and articles in The Globe and Mail, the National Post, and Maclean's. His second novel, The Last Woman, was published in 2009. He has also published poetry and written a play, Mother Moon, which was produced by the National Arts Centre. Bemrose was born and raised in Paris, Ontario, a place that has inspired the settings for his fiction, including his latest novel, The River Twice. He lives in Toronto.

John Bemrose pictured at left, in front of the convergence of the Grand and Nith Rivers in Paris, ON.

Many thanks to John Bemrose for taking us on this personal, virtual tour of Paris, Ontario, and how it factors into his new novel,  The River Twice. 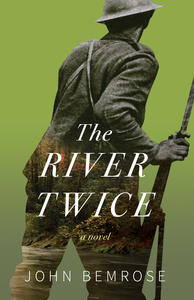 August 3, 2019
Where in Canada: A Glacial River Runs Through Lac/Athabasca