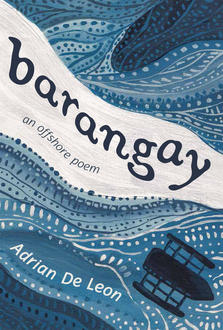 barangay is a new collection of poetry from Adrian De Leon that will pull readers into the tidal waves of the ocean that the barangays navigated long ago. A conversation with a taxi driver in his birthplace Manila, opens his eyes to the problem of Canada itself and the ways that we do not see how we wash up on the shores of the Global South, which he then explores in the collection. barangay then segues into the deadly impact of colonialism, the far-reaching effects of the diaspora from the Philippines, and then the personal loss of his grandmother and the ability to speak Ilokano, his grandmother's native tongue.

What being stuck in Manila traffic taught me about Canada

In 2015, during a trip to my birthplace of Manila, an Uber driver taught me what it meant to be Canadian. By the time Jhon pulled up beside me outside my favorite noodle soup diner in Binondo, my phone had said 5 mins away for 45 minutes. According to Google Maps, my apartment in Quezon City was about 10 miles away. In any other city, this might be a modest commute, certainly in Toronto, where I grew up, itself notorious for its traffic. Even in Southern California’s cobweb of freeways, you could get from Downtown LA to Santa Monica—the same distance—in under an hour with traffic. But in the Philippine capital, this drive might be a two-hour ordeal. With one exception: Sundays, the Lord’s Day, when the streets are empty, by God’s grace. Monday to Saturday, the roads are the Devil’s work.

Jhon held out an open pack of gum for me. Juicy Fruit. “Did you eat Juicy Fruit in Canada?” Not really, I wasn’t partial to gum. “My wife once sent me four packs of gum from her time in Canada in the balikbayan box. Juicy Fruit, Aveeno, corned beef, hydrocortisone. She wanted to send ketchup chips but I thought she meant potato chips and bottles of ketchup. Pero may lasa ng ketchup for potato chips? Why do that when we have banana ketchup?” My mouth involuntarily puckered at the memory of the cloyingly sweet and sour potatoes that seemed omnipresent in Canadian corner stores.

Jhon’s brow furrowed. “Canada, Canada, Canada. In Manila, Canada is everywhere. Sa Makati, or even sa Maginhawa, you can see Canada. Poutine, coffee, flags. Even the students are wearing, ano ba ‘yun? The warm hat?” Toques. Or beanies. “That’s right, tooks. The students at the University of the Philippines all look like Roots catalogues.”

I hadn’t expected him to know that iconic Canadian outerwear company, of all things. It’s true that, as we moved sluggishly through the city, I had spotted poutine trucks and a Tim Hortons. I had been too concerned with the choice of freezing my ass off in the car or opening the window in the smoggy air to really think about the Canadianisms here, in Southeast Asia, of all places. “Kuya,” I asked him, “I didn’t know there’s Roots down here.”

Jhon laughed dryly. “Not for this weather, maybe for Baguio, up in the mountains, ha? No, kuya, I saw Roots only in the finest balikbayan boxes. If you have family doon sa Toronto or sa Vancouver, maybe. Roots and Sears catalogues with the clothes to explain everything. I’m not surprised that they’re the latest fashion right now. But not me, walang big city Canada connection, except you, now.”

“I guess you have family in Canada?”

He smirked, and our eyes met in the rearview mirror. I watched as a fifth of his face tried to muster up the courage to tell a customer something displeasurable. “My wife is in Canada, your garbage is here.

I swallowed. “Excuse me?”

“Your country takes us away to work, and in exchange, we get to be your landfill.”

The disdainful landfill hung heavy in the air as we sat in silence. He could read my confusion.

Sure enough, Canada does send heaps of garbage to the Philippines, over 2500 tons. I had heard that one province used to send its garbage to Michigan, until Michigan didn’t want to take it anymore. So now, it’s sent to the next best expendable place: the Philippines.

“Don’t get me wrong, kapatid, you make great company. But the Americans get all the flack, no? The big bad empire, 1898, stole our islands to leapfrog over to China. Spain before that, three-hundred-thirty-three years. Japanese, four years. Chinese maybe now, maybe. But who’s really stealing our land right now, kapatid?” My fingers knotted up at kapatid--younger sibling, instead of kuya. I swiped my Internet browser away and turned to the Uber app.

Jhon pointed towards the back of the car, into the horizon behind us. “And not just land. But our water, too. I would love nothing more than to be able to get on a boat and sail that water, kapatid. Right offshore, if you squint into the distance, you’ll find ships that don’t seem to ever move. That’s Canadian trash. When America didn’t want to take your garbage anymore, you sent it to us instead, even though our government said no. So there it is, stuck in international waters, killing off our fish, while Canada pulls apart our families. Trash for children. Trash for husbands. Trash for wives.”

The problem that Jhon presented to me – that is, the problem of Canada itself, and the ways that we do not see how we wash up on the shores of the Global South – haunted me as I wrote my collection. How do I think about myself and my family, one of millions of Filipinos exported by our home country to work around the world, or otherwise abandoned by the Philippines, and our responsibility to other displaced people on stolen land?

barangay: an offshore poem is, first and foremost, an indictment against Canada, and like Canada, of the empires and settler states that jettisoned people from my home into the farthest reaches of the globe. I am as Canadian as the garbage that this country illegally ships to the Philippines. And in Canada, I am as much garbage – waste, trash, excess, refuse – as the country produces in its ravenous pursuit of profits on stolen land.

What I hoped to do, then, was not to try to craft a respectable politics out of this condition. Instead, barangay starts with the violence that scatters us, and instead of claiming our place in Canadian multiculturalism, refuse it altogether. And, in its stead, craft a boat that sails across other oceans and tributaries, to bring other displaced people on board.

Adrian De Leon is a writer and educator from Manila by way of Scarborough, Ontario. He is the author of Rouge (2018) and co-editor of FEEL WAYS: A Scarborough Anthology (2021), both published by Mawenzi House. His poetry and nonfiction have appeared in The Puritan, Joyland Magazine and Catapult. His research has been featured in VICE, the Los Angeles Times, National Geographic, ABC Nightline, The Guardian and Rolling Stone. Adrian currently lives in Los Angeles, where he is an Assistant Professor of American Studies and Ethnicity at the University of Southern California.