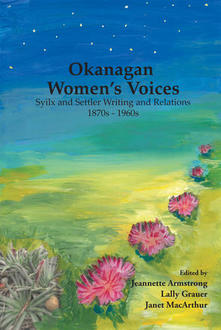 Where In Canada: Okanagan Women’s Voices

Okanagan Women’s Voices: Syilx and Settler Writing and Relations 1870s-1960 (Theytus) focuses on the writing and relations between Syilx women and settler women, who came to inhabit the British Columbia southern interior. In this week's edition of Where in Canada, we get a direct window into the lives of settler and Indigenous Okanagan women as they respond to an era of upheaval, uncertainty and transformation.

Both Indigenous Syilx (Okanagan) and settler women’s voices are brought to the page in this anthology highlighting the work of seven women from the Okanagan region in the interior of British Columbia including Susan Moir Allison (1845-1937), Josephine Shuttleworth (1865-1950), Eliza Jane Swalwell (1868-1944), Marie Houghton Brent (1870-1968), Hester Emily White (1877-1963), Mourning Dove (1886-1936) and Isabel Christie MacNaughton (1915-2003).  Their traditional stories, memoirs, journalism, popular history, poetry, drama and fiction create gendered Indigenous and settler perspectives on the land, history and culture of the Okanagan. Essays written by each of the editors and extensive biographical headnotes contextualize these women’s writing.

Everybody knows a white male perspective is typical of much historical writing in Canada. The same is true of the Okanagan, and the editors of this work join in the decades-long efforts to change that. This collection makes an invaluable contribution by communicating Syilx women’s perspectives in all their variety, subtlety and openness. Josephine Shuttleworth from the Penticton area incorporates indirectly a lesson on settler etiquette—or lack of it—in her captikwhl or traditional oral stories. In her stories, the roads and buildings fade away as the landscape is re-mapped with Syilx landmarks from the perspective of a living Syilx culture. The educated, thoughtful and informed Eliza Jane Swalwell, in what is now Lake Country, stops in the midst of describing cattle ranching in the 1870s and 80s to remember such an intense connection to the land that it left her “weak and weeping as I sat in the saddle.” In an excerpt from her novel Cogewea, Mourning Dove indicts settler greed and its invidious effect on Okanagan, Pend D’Oreille and Kalispel land and people by dramatizing the exploitation of the main character, Cogewea, by the treacherous Alfred Densmore. By choosing the name Cogewea (translating as chipmunk), Mourning Dove references the captikwhl of the little chipmunk girl and the monster owl woman, developing a subtle subtext for Indigenous readers and informed settlers. The Indigenous women’s voices in this volume indicate the roles and responsibilities they undertake: story-teller, knowledge-keeper, historian, interpreter, educator, novelist, activist, in their position of “standing between” Syilx and settler from the 1870s on.

Settler women’s personal relationships with Syilx women and the Syilx community also amplify and rewrite Okanagan history. Early settler Susan Allison’s writing in extensive recollections of the 1860s, 70s and 80s, and through a variety of genres from long poems to jotted descriptions, documents her sixty years in the Similkameen area of the Okanagan peoples’ land where today Princeton is located. Her work becomes a record of developing understanding and connection to Syilx people and culture through community and kinship ties. Hester White’s correspondence of twenty-five years reveals a long and fruitful association with Marie Houghton Brent, who was the great granddaughter of the renowned Chief Nkwala, and who wrote of his history and lineage in an attempt to educate settlers of the Indigenous history of the land. White’s family were settlers in Osoyoos and Brent lived in the Vernon area and later in Republic, Washington. Isabel Christie MacNaughton, who came to Okanagan Falls in 1917 with her family, wrote down over twenty-five captikwhl told to her on many occasions by her neighbour Josephine Shuttleworth, indicating long term trust and friendship. In some settler women’s writings relationships are erased or kept secret, particularly intermarriages between early settlers and Indigenous women. These erasures continue in many forms to the present day in the Okanagan. While the story of white hegemony enforced by colonialism can be found in the pages of Okanagan Women’s Voices, this book searches for and brings to light myriad ways in which Indigenous and settler women found “in-between” spaces to learn from, befriend and care for one another.

Jeannette Armstrong is a fluent speaker of the Syilx language and knowledge keeper of plant medicines, Syilx traditions, and cultural protocols. She holds the Canada Research Chair in Okanagan Indigenous Philosophy at UBC Okanagan and has been an educator in her Syilx community for the past 40 years. A novelist, poet, artist, and activist, her work on Indigenous oral culture, environmental ethics and education reaches an international audience. Her PhD thesis, “Constructing Indigeneity: Syilx Okanagan Oraliterature and Tmixw Centrism” is a landmark study of Syilx environmental ethics. She is a Fellow of the Royal Society of Canada.

Lally Grauer, Associate Professor Emerita at UBC Okanagan, taught both Canadian and Indigenous literature at UBC Okanagan, where she helped establish an Indigenous Studies program. She edited Native Poetry in Canada: A Contemporary Anthology with Jeannette Armstrong and has collaborated with Indigenous writers in papers and articles.

Janet MacArthur, Associate Professor Emerita at UBC Okanagan, created and taught the first courses on women’s literature, autobiography and trauma studies at UBCO. She has published a monograph on the reception of early modern poetry as well as articles on women’s literature, postcolonial literature, and settler colonial life writing. Recently, her papers have focussed on relations among the Syilx, mixed heritage, and settler women in the southern interior of BC, and on Holocaust film and fiction.