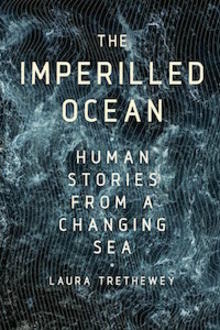 Author Laura Tretheway takes us out to sea in The Imperilled Ocean: Human Stories from a Changing Sea (Goose Lane Editions), exploring the compelling stories of people across the world and their relationships with the ocean to give a broader picture of its importance, its future, and its fate. In this edition of Where in Canada, Laura focuses on Canada, where on B.C's Fraser River, a quest of over 10 years has gone on to seek answers over the loss of a prehistoric fish from it's waterways.

The Imperilled Ocean is the culmination of years of writing and research that explores the ocean through the eyes of people at sea. The final essay in The Imperilled Ocean takes place along the shores of the Fraser River where fisheries biologist Erin Stoddard is tracking a mysterious and threatened animal. According to the International Union for the Conservation of Nature, the sturgeon group of species is more endangered than any other in the world. The Lower Fraser River population swims between the ocean and the rivers on the West Coast, hunting and spawning here since the time of the dinosaurs. But today this prehistoric fish is disappearing from the water – and researchers like Erin Stoddard are trying to figure out why.

The Fraser River is a massive waterway. It starts in the Alberta Rockies, runs west through British Columbia’s sagebrush deserts and evergreen forests before emptying into a massive delta near Vancouver, British Columbia. Unlike many major waterways in the Pacific Northwest, the Fraser’s main stem is undammed. The Lower Fraser white sturgeon are free to migrate uninterrupted between salt and freshwater, spawning and hunting when and where they need. This provides researchers like Erin Stoddard a rare chance to study a mysterious fish in its natural habitat and uncover the threats facing this animal today. Just because the Fraser has escaped a mega dam, the sturgeon faces obstacles, such as poaching, pollution, and overdevelopment. The final essay in The Imperilled Ocean takes readers inside a 10-year-long quest to figure out what is killing an ancient animal, while the other essays explore why the ocean is so important to human society through the stories of migration, adventure, work and art. 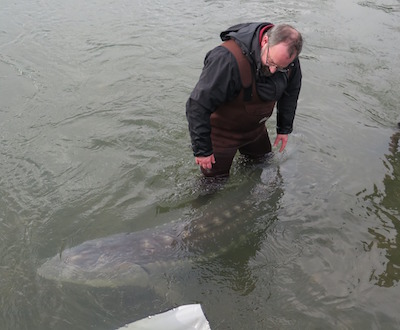 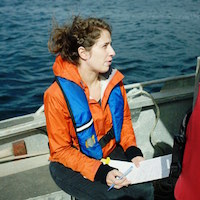 Laura Trethewey grew up in Toronto, but she’s lived all over Canada. That includes living in Banff, Alberta and attending university on both the East and West coasts. She currently lives in San Diego, California with her husband and dog. She hopes to return to Canada someday soon. The Imperilled Ocean: Human Stories from a Changing Sea is her debut book.

Thank you to Laura Trethewey for joining us on the ALU blog and to Goose Lane Editions for connecting us!

February 8, 2020
Before We Lost the Lake: The Untold Story of the Sumas Lake and the Sema:th

January 9, 2019
Poetry City: On the West Coast with Jane Munro