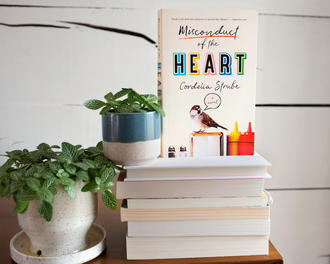 Today's Where in Canada takes us to Scarborough, Ontario—the setting for Cordelia Strube's Misconduct of the Heart (ECW Press). With its stark mix of hills, ravines, greenery and...strip malls, Scarborough offers a contrasting sense of place for main character Stevie, who, in navigating a toxic 21st century and the day-to-day of her corporate-controlled restaurant job, manages to find solace and refuge in Warden Woods.

See more details below
Tagged: misconduct of the heart, cordelia strube, ecw press, where in canada

Misconduct of the Heart is about all of us feeling our way around a 21st century that feels toxic, unstable and cruel. It’s about figuring out how to be authentic, staying true to who you really are despite the enormous pressures of alienation and conformity. It’s about not succumbing to apathy and despair in the face of the climate crisis, unending futile wars, political corruption, exploitative media and retail giants.

Because the novel reflects on the toll taken by our corporate age and sings a hymn to the strength of the ordinary person, it was important that I place my “ordinary” protagonist in an “ordinary” setting.

The Chappy’s restaurant franchise is a microcosm of 21st century normalcy where corporate expansion, surveillance capitalism, and self-absorbed, greed-driven destruction often fly below the radar of our day-to-day lives. Setting the novel in a corporate-controlled restaurant allowed me to introduce a large crew of singular, and sometimes outrageous, characters from all over the globe and place them in comical situations.

Scarborough as a setting provided the opportunity to juxtapose the stark world of strip malls, franchise restaurants, big box stores and their requisite parking lots with pockets of treed and tranquil neighbourhoods. Built on low hills and dales, Scarborough doesn't feel flat like many parts of Toronto. Ravines, rivers and brooks run through it, providing lush habitat for wildlife, and rejuvenation for Stevie, the novel's protagonist, who seeks refuge in Warden Woods. Throughout the novel, Stevie is in awe of trees, their powers of endurance, their generosity in providing shade and oxygen. Warden Woods, and its surrounding neighbourhood, felt right to me as a setting because it is close to public transit and relatively affordable housing, both crucial elements in the novel. As a kitchen manager, Stevie makes little more than minimum wage, which is why she lives in a basement apartment she refers to as “the dugout.”

Ultimately, Misconduct of the Heart searches for a common thread of meaning, a defense of the human personality, the individual. Like all of us, Stevie is burdened with sorting information from misinformation, wrangling with right and wrong, well aware that everyone’s right is someone else’s wrong. 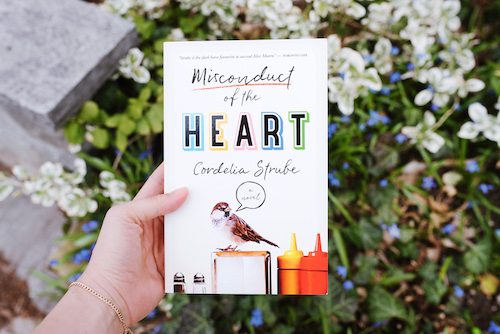 A word about the cover: I wanted the image to evoke a feeling of familiarity in readers. We have all experienced emotionally-charged moments in restaurants, staring at napkin dispensers and Ketchup bottles. The sparrow represents a life force which, by the end of the novel, Stevie discovers she has. You can’t keep a sparrow down. 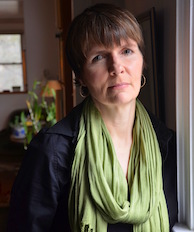 Cordelia Strube has won the CBC Literary Competition for her play Mortal and the Toronto Arts Foundation Protege Award and she has been shortlisted for the Prix Italia and the Governor General's Award. Her previous novels include Milton's Elements, Dr. Kalbfleisch and the Chicken Restaurant, Planet Reese and Lemon, which was longlisted for the 2010 Scotiabank Giller Prize and shortlisted for the 2010 Trillium Award.

Find more Where in Canada on the All Lit Up blog >> 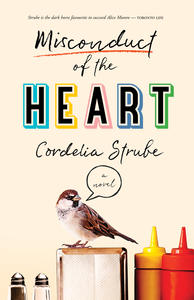 August 17, 2015
Poetry in Motion: The Spoken Word as a Tool of Liberation – El Jones