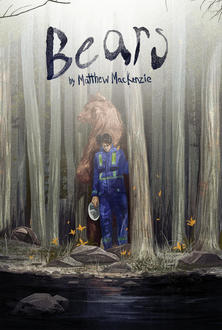 In Matthew Mackenzie's  Bears (Playwrights Canada Press) an Indigenous Albertan man named Floyd heads into the B.C. wilderness on the run from the RCMP after he becomes a suspect in a workplace accident. In his journey through the Rockies, he begins to take on a 'grizzly' new form....Multi-award winning Métis playwright, Matthew Mackenzie joins us in this edition of Where in Canada to discuss more about the play as an ode to nature, a recognition of the disproportionate harm that the Trans Mountain pipeline has had upon the health of Indigenous peoples of the area and the complex nature of the oil industry in British Columbia as a whole.

With the current government in power in Alberta, the Trans-Mountain Pipeline and projects like it have a rabid proponent.  The current government seeks to outlaw protest, ignores environmental concerns and has little regard for Indigenous rights.  The prospects for Alberta weening itself off its dependence on extracting fossil fuels to make a buck hasn’t looked bleaker in years and the consequences could be dire. I wrote Bears as a response to the threat our planet and its residents face if projects like the Trans-Mountain Pipeline are permitted to proceed.

In my play, an Indigenous oil patch worker named Floyd flees Edmonton, pursued by the RCMP.  Following the route of the Trans-Mountain Pipeline to where it ends in Burnaby, Floyd encounters various birds and animals who help him evade the authorities.  Floyd also experiences physical changes as he goes—his gait widening, his muscles bulging, his sense of smell heightening.  By the time Floyd makes it to the Pacific, he has transformed into a Grizzly.

Some people have called Bears a protest play, but I see it more as an ode to the birds and animals that call Alberta and British Colombia home.  The natural world we live in in Western Canada, while certainly under threat, remains a vast and incredible one.  It is easy to forget the destruction that the oil industry foments in Alberta, when you can make big money in the patch and then retire to a natural wonderland in the Rockies.  Some of the people who can’t ignore the destruction, are those who live downstream from where the oil that pumps through the Trans-Mountain Pipeline comes from, the predominantly Indigenous residents of Fort Chipewyan.

We learn through the course of Bears that Floyd was originally from Fort Chipewyan, where he was raised by his mom, who passed away when Floyd was young from a rare kind of cancer that hit without warning. In writing Floyd’s mom’s story, I wanted to honour the people who have lost their lives due to extremely rare cancers, that are blamed on pollutants found in the region created by fossil fuel extraction. In remembering his mother and the things he learned from her, Floyd reconnects with an Indigenous cultural heritage that was robbed from him when he lost his mom.

It was important to me to write the character of Floyd not only as an Indigenous Albertan, but one who has worked in the oil patch his entire professional life.  In this way, like all Albertans, he is not someone who casts dispersions on the fossil fuel industry from afar, but is one whose livelihood and wellbeing has been dependent on working in the patch.  I did this because I wanted to try to speak to the complex nature of opposing the damage the oil industry is doing, while at the same time not ignoring the wealth it has created for many Indigenous and non-Indigenous families, and our country.

Matthew MacKenzie is a multi-award-winning Métis playwright from Edmonton, Alberta. Artistic Director of Punctuate! Theatre, Matthew is the founder and an Artistic Associate with Pyretic Productions, an Artistic Associate with Alberta Aboriginal Performing Arts and Canadian Liaison of the Liberian Dance Troupe. Matthew has had nearly a dozen of his works produced across Turtle Island.

A special thank you to Playwrights Canada Press and Matthew Mackenzie for joining us for another edition of Where in Canada!

Grab your copy of Bears on All Lit Up >> 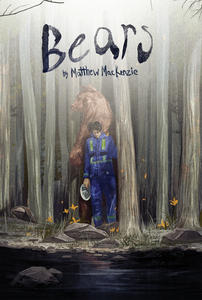