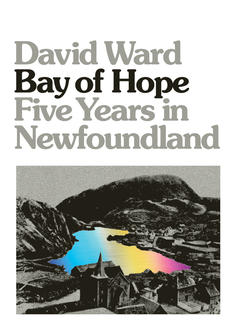 Part memoir, part nature writing, part love story, David Ward’s Bay of Hope, published by ECW Press this past April, is an occasionally comical, often adversarial, and always emotional story about the five years the author spent living in an isolated Newfoundland community. The following is an excerpt from Bay of Hope: Five Years in Newfoundland.

The following is a passage from  Bay of Hope: Five Years in Newfoundland:

Do you know you can buy an oceanfront house in Newfoundland for ten thousand dollars? Perched on granite cliffs rising several hundred feet in the air. In a small working fishing village equipped with high speed-internet, a store, a school, a medical centre, a community hall, a ferry service, a bed & breakfast, and a church. With a surprisingly moderate winter climate and a pace of life unlike any you probably know. Where whales break the ocean’s surface a short distance from your front door while bald eagles soar overhead. And where, on a nice day, you can see France — St. Pierre et Miquelon — as you stroll the boardwalk.

Your neighbours will be kind, generous, hard-working people capable of providing you with guidance, physical support, and food products of the land and sea. And if you do settle, your new-found friends won’t want you to fail. They don’t say so directly but their actions speak loudly. They conclude that you are low on firewood and in various ways work collectively to see that you have enough to get through winter. Or for no apparent reason they hand you a loaf of homemade bread and a fresh caught cod.

I’m talking about an isolated outport called McCallum. Please don’t see my thoughts as an effort to sell you something — this is just an FYI from an excitable guy. For five years, iconic Canadian authors Claire and Farley Mowat called Newfoundland’s Southwest Coast home. Fifty years later, I’m thrilled to say the same.

Last home on the right, I tell visitors when they ask where they can find my house. But even I don’t find my home that easy to get to. Just getting off the ferry is tricky for me. I know it is second nature for my neighbours, but I’m terrible at it. While passing parcels off and onboard, I’m scared I’ll slip between the boat and the bumpers. Anybody who’s seen me do this work can tell I’m terrified at low tide. Wherever I am on the wharf, I need to remind myself that that ferry carries cargo that requires craning. The safest choice I can make is to wave a quick goodbye to the boys on the boat, say hello to friends awaiting freight, and get my big butt out of harm’s way.

As I walk away from the wharf, I consider how long it will be before I touch land again. That’s a surprising characteristic about McCallum’s boardwalk — it’s built so solid, with buildings on both sides, I’m convinced I’m on land. But it actually runs a lengthy distance over water, past a fisheries facility, a house, a store, a post office, and several sheds before it finally arrives at a hill. But what a hill it hits. Up and down. I grab the rail and dig into the cleats, all the while carrying whatever goods I’m bringing back. I sneak a peek at Matt Fudge’s unintentionally aesthetically stacked firewood and glance to see if anyone is coming down the steep road to my right. McCallum calls its boardwalks roads, but there are no cars in McCallum. Neither the rugged terrain or the provincially funded ferry can accommodate cars.

Thanks so much to David for sharing these words from Bay of Hope, and to Ana at ECW for making the connection. (Psst: we found some great photos of McCallum that are the perfect side dish to this excerpt from Flickr user Megapixx). For more Where in Canada, click here. 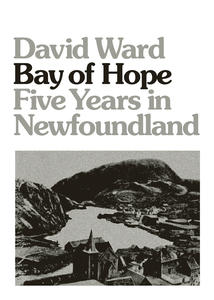 April 11, 2022
Reflections from the contributors of Us, Now

May 19, 2021
These are the Cats: Emails from Our Furry Frenemies + GIVEAWAY

June 10, 2015
Where in Canada: Discover Newfoundland and Labrador with this new field guide