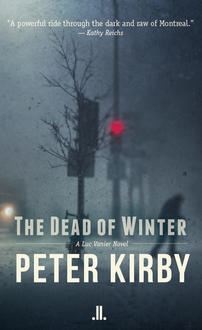 While we associate city winters with things like holiday window displays and everyone forgetting how to drive at once, there's a hidden network of crime and vulnerable people that still moves in the winter – one that's cracked open for all to see in Peter Kirby's  The Dead of Winter (Linda Leith Publishing). Read on to find out how the streetscapes of Montreal factor into a grisly winter murders case in Kirby's first Luc Vanier Novel. 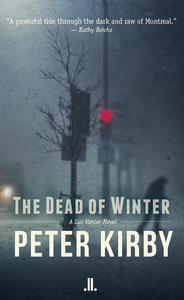 Peter Kirby practices international law with one of Canada’s largest law firms. He was born in Cork, Ireland, and grew up in Brixton, South London. He has been recognized by The American Lawyer as one of Canada’s leading 500 lawyers and called a star in international arbitration by Benchmark Litigation. He lives in Montreal. The Dead of Winter is his first in the Luc Vanier series of crime novels, which also includes  Vigilante Season (2013) and  Open Season (2015).

It's the dead of winter in Montreal, and the city makes a continual effort to cheer us up with the bright lights of luminothérapie and encouragement to get outdoors and enjoy ourselves. Beneath all this, there is another side to the city. A dark side where murder happens, the vulnerable are targeted, and the suspects are not who you might imagine. This is Inspector Luc Vanier's world. As Maclean's noted, "One of the pleasures of Kirby's novel is the setting. Thugs and lowlifes rub shoulders with the elite while the city is pummelled by an endless succession of snowstorms." This is the vivid atmosphere of place.

Christmas Eve. Inspector Luc Vanier is drinking his way through a solitary holiday with Patsy Cline "singing in the dark of loss and despair," his thoughts far away. It takes time to register the ringing cell phone on the floor and pick it up.

"Sorry to disturb you at this time of night, sir, but they're collecting bodies down here."

And so begins the Inspector's odyssey into darkness. Homeless people are showing up dead in Metro stations and around heating vents outside businesses, coveted sleeping places where those who have nowhere else to go can find warmth. This is the reality of big cities, where many of society's most vulnerable pass from this world without ceremony or even comment. But, as it quickly becomes apparent, this is more than the tragedy of isolation and poverty. It is murder.

As Vanier follows an investigation dedicated to honouring the dead and finding who is responsible, Peter Kirby takes us on an unforgettable journey through the streets of Montreal, its shelters and gathering places. He also leads us into those places where the forces of church, state and property developers make plans and hoard their secrets. The city Kirby so vividly depicts is full of contrasts – between neighbourhoods, between rich and poor, between aspirations and hard realities. Montreal's winter glitter – equally composed of ice and manufactured glitz – is a surface that falls away under the weight of its secrets. After reading Kirby's work, it is quite impossible to travel the city with the same destination-focused purpose anymore. One simply has to look and wonder: what else is going on? What are the untold stories of this street, this avenue, this intersection?

The Dead of Winter is part of the critically acclaimed and bestselling series that includes Vigilante Season and Open Season. And with The Dead of Winter now available in French as Vague d'effroi and as an English audiobook, Vanier's world becomes even more accessible to fans of fine crime fiction.

Thanks so much to Carmelita at Linda Leith Publishing for shovelling the snow and ice away from Montreal's underbelly and sharing  The Dead of Winter with us. For more Where in Canada, click here.