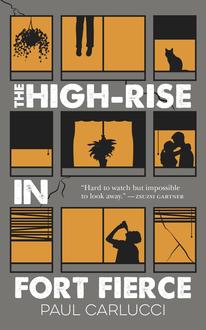 The picaresque stories in Paul Carlucci's compelling short story collection High-Rise in Fort Fierce (Goose Lane Editions) centre on the ravaged past of Franklin Place from construction to demolition decades later. In this piece, Paul takes us through the history of Mackenzie Place in Hay River, NWT which informs the setting in his collection.

If you’re flying into Hay River, NWT, you might spot it from the plane. If you’re driving, you’ll probably see it rising over the tree canopy. If not, you’ll soon find yourself at the foot of its 17 stories. Mackenzie Place, which everyone just calls the high-rise, soars way over downtown’s one-floor smatter. And it’s very strange, this shabby feat of Cold War engineering, because you don’t expect to see it in a town so northern and small.

I lived in Hay River for a year and a half, not in the high-rise, but a trailer park up the road. I was in and out of the building often enough, and really the place lives outside its own walls. It projects an atmosphere you can feel all across town.

In The High-Rise in Fort Fierce, I think of it as Franklin Place. I play with its past and present, and give it a conclusive future. It’s a monument to paranoia, violence, isolation, addiction, and colonialism. My three generations of landlords carry their baggage from year to year, mixing with a cast of sad and unsavoury tenants: sex offenders and murderers, bigots and brawlers, boozers and drug-users. Nobody catches a break and it’s all very dire. The building, ultimately, is condemned and destroyed after a plague of mould sprouts behind its walls.

In reality, Mackenzie Place leaves a mixed impression on people living in and around it. Google churns up stories similar to those in Fort Fierce. At one point, it was structurally unsound, and the landlord didn’t seem to care. And, like the town itself, Mackenzie Place has been the centre of some serious trauma.

Violence and disrepair are big parts of its identity, but it’s also host to the town’s only radio station. Teenagers have used it as a remedial schoolroom. And it’s been a home to newcomers to the north, people from other countries trying to get ahead working in the territory’s natural resource sectors. All this is very nicely detailed in an essay by Lindsay Bell and Jesse Colin Jackson.

But none of that sunny stuff happens in Fort Fierce. I liked the idea of referencing the Franklin Expedition, like the high-rise is a modern-day Erebus or Terror, some failed, locked-in-the-ice imperial endeavour that’s harmful not just to the people who lead it, but also the people who visit it, be they locals or foreigners. And once those ships were iced in, they pretty much were buildings, full of frightened people desperate to flee.

That’s pretty much how I felt when I left Hay River. It’s not for everyone, living so far out with such a tiny group of people. You feel shackled to your community, which is worse, in a lot of ways, than being alone. Mackenzie Place was a community, too, isolated in a lot of ways from the broader town. You can’t really help but imagine the residents, shackled in its reaches, the night long and dark and cold, but not lonely.

Paul Carlucci’s first collection of short fiction,The Secret Life of Fission, won the 2013 Danuta Gleed Literary Award. His second collection, A Plea for Constant Motion, was published to critical acclaim in 2017. His stories have also been published in numerous magazines and journals, including Malahat Review, subTerrain, Fiddlehead, and New Quarterly. A former journalist, Carlucci has lived across Canada — including eighteen months in Hay River, NWT, while writing The High-Rise in Fort Fierce — as well as Ghana and Zambia. He now resides in Ottawa.

Thanks so much to Paul for sharing a bit of the history of Mackenzie Place and for sharing The High-Rise in Fort Fierce with us. Also thanks to Nathaniel at Goose Lane Editions for connecting us. For more Where in Canada, click here.