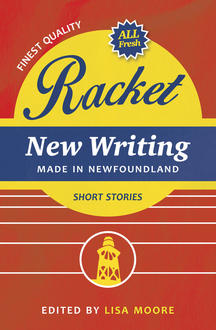 Where in Canada: New Newfoundland Writing

It is not a traditional Newfoundland, but it is writing made here and it is new. And the flavour of these stories is neon-bright. 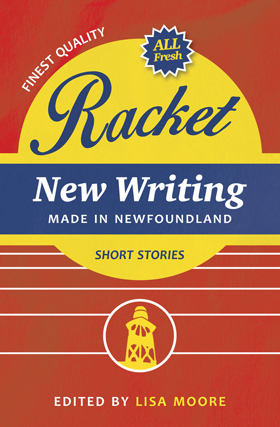 Lisa Moore, editor of Racket, has written two collections of stories, Degrees of Nakedness and Open, as well as a novel, Alligator. Open and Alligator were both nominated for the Giller Prize. Alligator won the Commonwealth Prize for the Canadian Caribbean Region and the ReLit Award, and Open won the Canadian Authors' Association Jubilee Prize for Short Fiction. Lisa has a Bachelor of Arts degree from the Nova Scotia College of Art and Design. She also studied at Memorial University of Newfoundland, where she became a member of The Burning Rock Collective, a group of St. John's writers.

Racket is one of those books you can judge by its cover. The graphic design, title font, and the predominantly red, yellow and blue palette were borrowed from the biscuit packaging of Newfoundland’s Purity Factories Limited.

Purity makes peppermint knobs, those bullet-sized candies that are white and sugary with neon-bright pink stripes. If there are doting parents in Newfoundland sending care-packages to their grown-up children who have just moved away to go to university for the first time, the care-packages probably contain a bag of peppermint knobs.

Purity also makes the Christmas syrup given to children who go mummering (a Newfoundland tradition experiencing a revival), when the adults get the stronger stuff. Today there are arts and crafts camps held to help children make the traditional hobby horses for the Mummer’s parade. The hobby horses have nails in their jaws, noisy teeth that snap viciously when anyone draws near. Who made these giant puppets in the past? Did they just materialize out of the fog? A ghostly, stampeding herd.

And if a Newfoundlander in Fort Mac is waiting for a bucket of salt beef to come off the luggage carousel, there’s a good chance he’s also waiting for a bag of Purity’s hardtack, required in recipes for fish and brewis.

So in other words, evoking the Purity brand on the cover of an anthology of short stories from Newfoundland is akin to quoting Proust’s madeleine. Sip that childhood strawberry syrup, or dip a Purity Lemon Cream biscuit in a cup of tea: there is an avalanche of every thought/feeling/memory/idea of what Newfoundland is, or has been, or could possibly be in the future. Memories are unleashed, willy-nilly, topsy-turvy from the depths of the syrup-sipper’s/ biscuit eater’s subconscious.

But there is also something saucy and self-aware about the cover of Racket, an anthology of short stories that claims to introduce new Newfoundland writing. Saucy, because the Purity brand stands for tradition while the stories here are contemporary. They are written in Newfoundland and they are fresh off the press, but they make no attempt to capture ‘Newfoundland’ as we have understood it in the past.

Instead, there is writing that documents urban sprawl, surreal and nightmarish quakes in the earth of Bannerman Park, or two sisters – one of whom believes she has transformed into a gorilla. In another story, a young Sri Lankan woman who has gone from Canada to London, England to study and live with an older relative, heartbreak and mutual understanding ensues.

There’s a travelling home inspector who – driving through rural Newfoundland – comes upon a wooden box of jawbones nailed to a post.

I ran into Matthew Lewis, the very talented author of “The Jawbone Box”, (a strange story; strange in the way all excellent literature is strange), in a line up at the airport in St. John’s several months ago, and he was heading west, possibly for good.

And it is this sense of perpetual motion, of transformation, or transition, the seismic shifts, whether it is the ground under our feet, or the emotions of grief or love, fear (the young woman in Melanie Oates’ story who is threatened after a long and dangerous night on the town by a pizza delivery man who comes to her apartment) or the marks left on the pavement after a lethal car accident that scar the lives of the characters left behind in Jamie Fitzpatrick’s story, or in Susan Sinnott’s harrowing tale of a young man faced with a possible amputation, or the promise of a real avalanche in a story set in Whistler, or the avalanche of love/ lust in a story set on a rollercoaster – it is this sort of constant movement and change that charges these stories. It is not a traditional Newfoundland, but it is writing made here and it is new. And the flavour of these stories is neon-bright.

Thank you to Breakwater Books, especially Rebecca Rose, for connecting us with Racket's editor. And thank you to Lisa Moore for sharing what makes Racket such a part of Newfoundland. 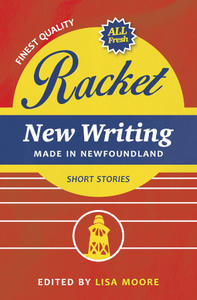