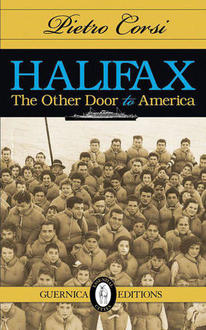 Where in Canada: Halifax’s Pier 21 and “The Other Door to America”

In Pietro Corsi's Halifax: The Other Door to America (Guernica Editions), he details the trials and joys of this journey for so many immigrants who named Canada their new home, as well as the “door” they used to enter: that of Pier 21.

See more details below
Tagged: halifax, the other door to america, where in canada, pietro corsi, guernica editions, pier 21

What:  Halifax: The Other Door to America (Guernica Editions, 2012).

Who: Pietro Corsi was born in the region of Molise (Italy) in 1937. In the mid-50s he moved to Rome, where he worked as a translator while co-creating radio programs for RAI, the official Italian radio organization. He was visiting Canada in 1959, when he was offered a job by the Italian weekly newspaper “Il Cittadino Canadese”. During that time, he wrote his first work of fiction. He later changed venue, effectively pioneering Italian service standards in the cruise industry. Promoted to Operating Manager for Princess Cruises, of Love Boat fame, he moved to California in 1969. In 1992, he retired to resume his writing career. He has authored several books ranging from fiction to essays, cookbooks and training manuals for the cruise industry.

“This is Canada? Have we left our land to come to these deserted, abandoned and snow-covered lands?” –Giovanni Bino, Italian immigrant, arriving 1958. 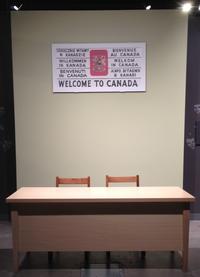 From 1928 to 1971, a combination of immigrants, war brides, British children escaping the war, and refugees totalled nearly 1,500,000: and each one passed through Halifax’s Pier 21, what author Pietro Corsi called “The Other Door to America.” In his book subtitled same (from Guernica Editions), Corsi details the trials and joys of this journey for so many immigrants who named Canada their new home, as well as the “door” they used to enter: that of Pier 21.

Pier 21 was built in 1928 as a replacement for Pier 2, and was specifically designed to handle an influx of new immigrants to Canada. The two-level building could accommodate new entrants (and the Customs interviews, health inspections, and rail travel that went with them) on the top floor. The cast of characters new immigrants would meet upon their arrival are detailed in Corsi’s book, and included official Port Chaplains, volunteer translators, and the Canadian Council of Immigration Women, who assisted women travelling alone with children. 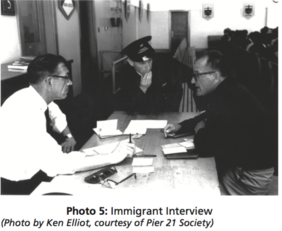 The unloading of goods took place on the floor below. Arriving immigrants brought their most precious items from home: work tools, sewing machines, stoves, jewelry. One family even brought a dismantled fireplace from home, intended for rebuilding once settled in their new country. Customs officials frequently had to seize contraband items – usually food – from homesick newcomers – usually Italians. One boy waiting in line noticed the unsupervised pile of seized salamis and loaves of bread and made himself quite a sandwich!

Twenty years after its official closing, Pier 21 reopened its doors thanks to the efforts of the Pier 21 Society, a group that strove to raise public and political awareness about Canadian immigrant stories that began after their ships docked there. The site is now home to a museum celebrating Canadian immigration from every route and coast, whose mandate is to “explore the theme of immigration to Canada in order to enhance public understanding...the vital role immigration has played in the building of Canada and of the contributions of immigrants to Canada’s culture, economy and way of life.”

If you’d like to learn more about the role Pier 21 played in accommodating immigrants and continues to play in educating all Canadians, check out Pietro Corsi’s book. Many thanks to Anna at Guernica for sharing the book with us – the black and white photos are from its pages.

January 14, 2021 by Ioana Georgescu
One Life in Many Languages