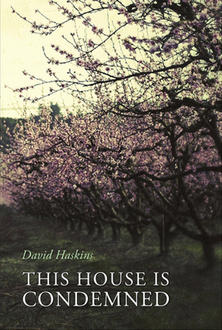 This House is Condemned is equal parts elegy, portraiture and exploration of a life lived at the edge of Lake Ontario. Described by author David Haskins as "a canvas for moving light," Lake Ontario also becomes the blank page on which he writes pointedly and poignantly about everything from childhood Christmases to adult travels to the loss of his father and the eventual demolition of his family home.

See more details below
Tagged: This House is Condemned, David Haskins, Where in Canada, Wolsak & Wynn 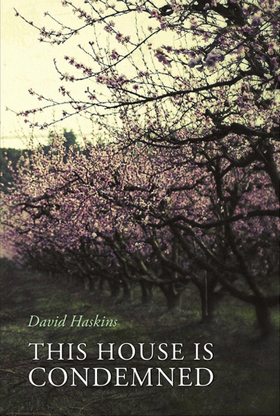 David Haskins emigrated from England to Beamsville, Ontario, at the age of eight and now lives in nearby Grimsby. His work has been published in over thirty literary journals, anthologies, and books, and he previously released a collection of poems entitled Reclamation.

This House is Condemned is equal parts elegy, portraiture and exploration of a life lived at the edge of Lake Ontario. Described by author David Haskins as “a canvas for moving light,” Lake Ontario also becomes the blank page on which he writes pointedly and poignantly about everything from childhood Christmases to adult travels to the loss of his father and the eventual demolition of his family home.

In these essays, as well as in the poems and fictionalized accounts interwoven between them, Haskins reflects on ebb and flow of human experience — on the “[e]dges, ridges, divides” that mark both the shoreline of Lake Ontario and the journey from childhood to adulthood.

While one can hardly ignore the sprawling Greater Toronto Area and gateway to the St. Lawrence that make up Lake Ontario’s northeastern shoreline, the small towns and moderate cities along its southwestern border are often overlooked. Places like Haskins’ Beamsville and Grimsby, as well as the nearby cities of St. Catharines and Niagara Falls, seem to have little to offer next to the cultural and political dynamo that is Toronto. But as Haskins reveals again and again in his recollections, nothing could be further from the truth.

One has only to read the initial essay in Haskins’ collection, “In Place,” to understand the diversity and allure of this area. He mentions earning money picking cherries at one of the many orchards that dot the so-called “fruit belt” of the Niagara region. He describes the various types of vessels on the Lake: the freighters that serve industrial Hamilton, the tall ships headed to a regatta in Port Colborne, the salmon boats in the spring derby, the pleasure craft in the summer months. He also alludes to the history buried under the Lake: schooners sunk during the War of 1812. He mentions the Welland Canal and the Golden Horseshoe, two of the area’s defining landmarks — one man-made, one natural.

And, of course, he is not alone in this landscape. He shares it with a variety of wildlife: “Cormorants. Cleanup crows. Skittering sandpipers. Muskrats in the creek banks. Garter snakes. Painted turtles with paintbox patterns on the underside of the plastron. Two-foot-wide snapping turtles whose beaks could snap a shovel handle....”

Tempering this child’s view of a natural playground are Haskins’ adult reflections on the effects of progress: the building of the Queen Elizabeth Way (QEW), the condemnation and eventual demolition of his family’s 135-year-old home in Beamsville, and the gradual erosion of Lake Ontario’s shoreline.

For better or for worse, though, this is the home Haskins returns to after his many travels across Canada and abroad. This is, as he concludes in “In Place,” “my territory.” And in This House is Condemned, he invites readers to make it their territory, too, if only in the mind and for a short while.

Thank you to Wolsak & Wynn for sharing this little slice of Canada with us. You can watch a video of David reading from This House is Condemned on the Wolsak & Wynn website.