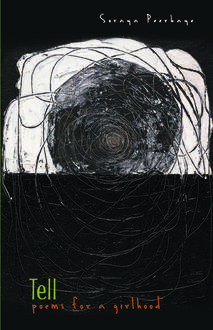 Soraya Peerbaye's poetry book  Tell: Poems for a girlhood examines her own remembrance of an Asian adolescents twelve-year murder trial through the poetry of her girlhood, the unease of adolescence, and the circumstances that enable some to pass through unhurt. In this edition of Under the Cover, Soraya shares more with us about attending the trials in-person and reflecting back on the victim’s life now as a mother.

Tell: Poems for a girlhood is a response to the trials of the young people involved in the murder of Reena Virk on November 14, 1997. The work takes breath from the evidence of Virk’s agency and her desire to survive.

My close friend, Sheila Batacharya, attended the early trials as part of her MA thesis research. I remember her calling me once after she found herself next to two of the young assailants in the washroom of the Vancouver Supreme Court, washing their hands; we recollected vividly our memories of being brown girls in middle school washrooms, and the social and physical violence that sometimes took place there.

I attended the second and third trials of Kelly Ellard, and was struck by the nature of testimony, as young witnesses relived that night through the formal process of law, and adults brought their forensic analysis to their memories. There were elements of testimony that the trial could not hold – the shimmer of moonlight on water, a shooting star – because they had no value for a narrative of guilt or innocence; yet these were the only elements that seemed to hold potential for an embodied kind of remembering.

My research took the form of attending the trials when I could; obtaining transcripts; walking along the Gorge Waterway, mapping the colonial violence in the region, the and the resistance of Indigenous and racialized people. I often felt, in walking, that the courtroom walls fell away, that the courtroom expanded to hold the Gorge, night skies and middens. I found a tensile relationship between the narratives of examination, confession, recantation, denial, silence, autopsy, ecology, history, myth, the body.

The trials took 12 years – the span of a childhood – to conclude. The duration of the trials, and the uncertainty of verdict, meant that I was writing a narrative that always threatened to disintegrate. The ravelling and unravelling of the narrative shapes the poems, and the structure of the collection, too.

When I was writing the work, I was looking back at my own girlhood and adolescence. Now, I find myself thinking of the life of Reena Virk, and the trials, as the mother of a thirteen-year-old; considering what it is to bring up a young person who is asking questions about gender, race and passing; and what it is to try to touch their experience, to have enough of their trust that they might turn to me, now that I am on the other side of it. I wonder how those reflections and conversations would inform the book now.

Soraya Peerbaye's first collection of poetry,  Poems for the Advisory Committee on Antarctic Names (Goose Lane, 2008), was nominated for the Gerald Lampert Memorial Award. Tell: Poems for a girlhood (Pedlar Press, 2015) was nominated for the Griffin Poetry Prize and the recipient of the Trillium Award. She holds an MFA in Creative Writing from the University of Guelph, and is an advocate for equity in the arts. She lives in Toronto with her daughter. 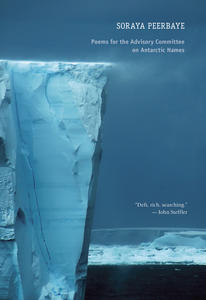 Poems for the Advisory Committee on Antarctic Names