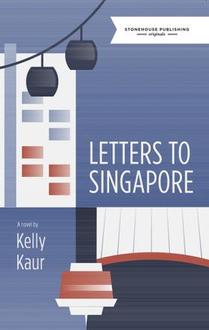 Kelly Kaur's novel Letters to Singapore (Stonehouse Publishing), brings to life Simran, who after a close escape from an arrange marriage, attends university in Calgary. The letters she writes to her mother, sister and friends reveal life is fraught with conflict, hilarity and peril. In this week's edition of Under the Cover, Kaur shares the art of letter writing.

See more details below
Tagged: Letters to Singapore, Kelly Kaur, Under the Cover

The Art of Letter Writing

In 2019, I was accepted into a 4-month writing program for immigrant women through Alexandra’s Writers’ Centre Society in Calgary and the Writers Guild of Alberta. In a panic, I tried to come up with an idea for my dream novel. “What about letters?” I wondered as I brainstormed with my daughter the night before the program selection interview. “Good idea,” she chirped. That was all I had going in – letters. What would I do?

Anyone remember the good old days? When I was a teenager growing up in Singapore, I loved writing letters to pen pals and secret boyfriends. I remember those days before social media where the only way to keep in contact with those far away was to pull out beautiful, exquisite stationery or that bright blue pre-paid aerogramme. I would sit at my desk and pour my heart out as delicious words, feelings, and emotions spilled out onto paper. Once inked, my story was permanently etched. It was frozen in that moment in time. Then, I would carefully write the address of the recipient on the envelope, seal the letter, go to the post office, and excitedly drop the letter through the slot:  an accomplishment of remote connections. The waiting began - for a long time. Days and days would go by before I would get a letter back. Sometimes, months. Sometimes, never. The anticipation was maddening and thrilling. That was the mystery of letters.

Indeed, when I began writing Letters to Singapore, I had absolutely no idea what would unfold. How would I pull this off? What could I say?  Soon, I realized that the only way to write was, simply, write! I penned the first letter. It was from Simran in Calgary to Mummy in Singapore. Now, what? Sister Amrit. Chinese friend Amy. South Indian friend Anita. How would the stories evolve or connect? I confess that on most magical days, the women would take over and write their own letters. I became Simran, Amy, Anita, Amrit, and Mummy. It was like these women clamored to speak and to be heard. Their stories spilled, secrets tumbled, chaos erupted, and passions unleashed. They, simply, took over! The letters became a safe space for these women to explore their forbidden thoughts and unheard desires. Letters! Soon, the stories in the letters became intricately and inextricably linked. Then, I gathered courage along the way as a new writer and let the power of fiction lead the way. For me, the women in the novel came to life and insisted on stepping up and stepping out of the novel. In such a way, my novel came to fruition, letter by letter.

Confession - when I was 14, I was home alone one fateful day. I stole my sister’s letter sent from her friend: the postman had just dropped the mail through the slot of our front door. Young, stupid, and curious about what secrets were in that letter, I gently steamed open the flap of the envelope with the hot vapor of the boiling kettle; it was a trick I had read about in a Nancy Drew book. Yes! I read my sister’s letter from her friend and guiltily glued the flap down. What stories I uncovered that day. My sister never knew!

You won’t have to do that with Letters to Singapore. Join in the permitted pleasure of reading the intimate secrets shared by Simran, Mummy, Amrit, Anita, and Amy in their letters. Oh my. What tales they have to tell!

Kelly Kaur grew up in Singapore and came to Canada to study at the University of Calgary. She is a lecturer at Mount Royal University and Athabasca University. Her first novel, Letters to Singapore, published by Stonehouse Publishing, will be out on May 1, 2022. She has been published in Italy, Qatar, Malaysia, Zimbabwe, the United Kingdom, Singapore, Canada, Berlin, Prague, Australia, and the United States. Her poems have appeared in the International Human Rights Art Festival in New York and North Dakota and is currently in a travelling exhibition all over North Dakota.. Her work will be in upcoming anthologies - Transformative Stories of Canadian Immigrant Women and Growing Up in Indian in Singapore. She is also on UNESCO's Ulyanovsk Cities of Literature Project - The Only Question Project. This year, her work will travel even further. Her poem "A Singaporean's Love Affair" is going to the moon – twice. It will be included in time capsules in the Nova Collection of the Lunar Codex – Nova-C mission (June 2022) and the Polaris Collection –Griffin mission (Fall 2023).