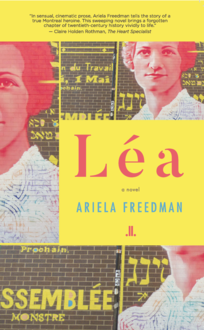 Léa (Linda Leith Publishing) by Ariela Freedman is a novel that brings Léa Roback  to life  — an activist who spent nearly a century fighting for women’s rights, labour rights, and social justice. In this week's edition of Under the Cover, Freedman shares how she got to know Roback through her archives and legacy.

I first saw her on a Jane’s Walk at the corner of St. Dominique and Mont-Royal avenue. She looked like she was gazing right at me. The mural of Léa Roback, full-face and gazing benevolently on the Plateau passersby, was the final destination of our walking tour about the textile workers and labour activists of Montreal.

I’d never heard of Léa Roback, who spent nearly a century fighting for women’s rights, labour rights, and social justice. The muralist had painted her against the backdrop of a pamphlet for the assembly for International Workers Day, printed in Yiddish and in French. Her fluency in both languages was key to her success as a labour organizer, bridging the linguistic and cultural divide between the Jewish garment workers who had recently immigrated from Europe, and the French-Catholic girls from rural Quebec. Smiling demurely down on us, she looked like the patron saint of the district, less famous and less imposing than the twenty-story high Leonard Cohen a few blocks away, but no less central to the history of the city.

She was also defaced. Our tour guide sounded frustrated, and said that this had happened before. The mural was repaired, and then vandalized again. Someone had drawn a moustache across her rosy face. A couple of swastikas were scribbled high up on the wall. A deliberate targetting: Léa was a Jewish activist, and the Yiddish writing on the wall was done in Hebrew lettering. Her legacy was––in old and chillingly familiar ways––being wiped from her very face.

The more I learned about Léa, the more I wanted to know about her. In the 1930s, during Hitler’s rise to power, she moved to Berlin to join the resistance. She came back to Montreal and ran a communist bookstore, campaigned for votes for women, helped Fred Rose, a candidate for the local Communist Party, get elected to Parliament. She was indefatigable, an activist until her eighties.

In later photographs, she is white-haired, with enormous glasses and an electric smile. I might have passed her on the street or at a protest when I first came to Montreal. I missed her—but I could still get to know her, through her archives and her legacy. 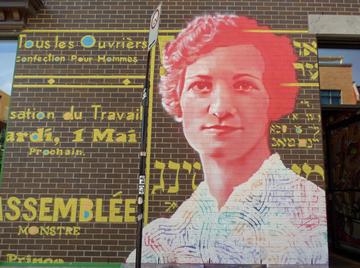 Front & Back Cover of the novel Léa

When I finished my novel, I knew which image I wanted for the cover. The muralist, Carlos Oliva, goes by the tag Hsix. He has been doing graffiti since he was 16, and specializes in portraits. I wrote to him to ask for permission to use the image. It’s very sad, he wrote back to me. I’ve fixed it twice, they keep coming back. Now the face looks a little weird.

The mural is gone now. The portrait only exists in its original version in photographs. It is in the nature of murals, and of lives, to be ephemeral. Still, Léa’s legacy is extraordinary. She is a street name, an archive, a foundation. And now she is a book. 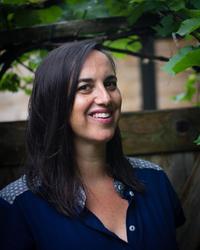 Ariela Freedman was born in Brooklyn and has lived in Jerusalem, New York, Calgary, London, and Montreal. She has a Ph.D. from New York University and teaches literature at Concordia’s Liberal Arts College in Montreal, where she lives with her family. Her debut, Arabic for Beginners (LLP, 2017), was shortlisted for the QWF Concordia University First Book Prize and won the 2018 J. I. Segal Prize for Fiction. Her second novel, A Joy to be Hidden (LLP, 2019), was shortlisted for the Segal Prize in 2020, and was a finalist for the The Paragraphe Hugh MacLennan Prize for Fiction. Léa is her third novel.

June 2, 2022
Under the Cover: Jane Byers on adoption and family in Small Courage

May 16, 2019
Poetry in Motion: The varying gaits of Claire Kelly's Maunder