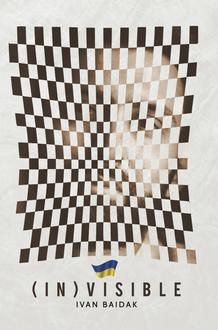 Celebrated Ukrainian writer Ivan Baidak's newest novel,  (In)visible (Guernica Editions), hits particularly close to home: it chronicles the protagonist Adam's tentative steps into public life after years of self-inflicted "invisibility." Diagnosed with Tourette's syndrome as a teen, Adam's story mirrors Baidak's own experiences with Tourette's: ones he shares in this essay below.

Our relationship has been going on for 18 long years. They sometimes change their character, sometimes escalate or compromise, but tics have always haunted me. Although over time I learned to control them.

They are perceived in different ways: mockery, insults, surprise, and interest. Getting attention does not always mean being the star of the stage or the sports field. I told myself that someday I would write a book about living with Tourette’s.

Here are five different stories that once happened to me, and which can somewhat characterize this life.

It should be said that this was also the first conscious act against my tics. This is the topic of a separate article because in childhood I never encountered an aggressive reaction to my problem. Looking back, I can state that children do not know what prejudice is, they learn it later, but to the extent of the kindness of children’s hearts, they never want to offend someone who is different from them for various reasons. The people who had surrounded me during my studies at school knew and accepted me and my peculiarities, but that wasn’t the case with my new university classmates.

It was at one of the first lectures, given the new environment, that my vocal tic intensified, and in the middle of the lecture, the teacher, indignant at my picking my nose, came up to me and dragged on about the rules of etiquette in public for about five minutes, after which she asked me to leave the auditorium. It should be said that later, realizing what the matter was, she apologized, but this was my first blow.

Even more painful blows were job interviews, where I was told directly during the interview: you will have to communicate with people, and your tics will make a bad impression. If I did manage to control myself, it ended in dismissal a month or two later when the tics became apparent. One day my neighbour started openly mocking my movements and laughing, and this is probably the only time I remember being in a state of aggression because the first thing I wanted to do was to get up, pick up my laptop, and hit my neighbour on the head with it. Fortunately, I controlled myself and politely asked why he was doing this. He did not answer but stopped his performance.

Random people reacted to my tics in different ways. And in most cases, it was enough to refer to a cold or pain in the neck to explain the motility of movements. However, reactions to the tics were not only negative. The most interesting situation happened to me during my studies at the university. One of my fellow students, with whom I developed a friendly relationship, carefully touched on the topic of my tics (at that time it was blinking eyes), and said: “Why are you worried about this? I actually thought at first that you were flirting with me.”

My illness had two critical conditions. Tourette’s syndrome is aggravated by strong emotions, whether positive or negative. Mine took place during significant life changes - upon entering and graduating from university (that is, the beginning of adulthood). Usually, my tics would change: eye blinking would alternate with neck twisting or stomach contractions, and would last for two or three weeks, then change again. During two exacerbations, all the tics I know tormented me at the same time. I remember my body was so exhausted that I slept 16 hours a day. I didn't have tics during sleep.

The fifth story: The final one.

In fact, this story has no end, but recently it took a sharp turn. For many years, I struggled with my situation in different ways, was treated with various methods, later became disappointed in each of them, went to psychotherapists, and visited many support groups, where I met people who had similar problems. I felt anger, resentment, and despair, and I asked a million questions about why it was me who had to live with Tourette’s.

And at one point I decided to accept everything as it is. I didn’t notice how I stopped thinking about tics as if I forgot about them, and over time they seemed to forget about me. And everything became easier. The disease started to subside when I stopped focusing on it.

Now I’m a little over 30, and the tics, of course, have not stopped. Tourette’s syndrome cannot be completely cured, but they bother me much less and definitely stopped interfering with my life. I understood my body well and realized the habits that provoked the occurrence of tics, so now I try to live in a rhythm that does not cause new exacerbations. The story of my tics is a separate story of my life, I used to blame it for this challenge, but now I try to find a benefit in it.

I wrote a book about it. 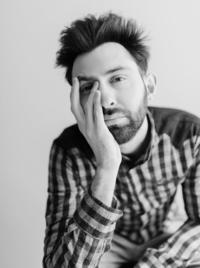 Іvan Baidak is a daring Ukrainian fiction writer and poet whose debut novel Personally Me Personally for You (2013) became a national bestseller and garnered excellent critical reviews. His two short story collections, Role Plays (2014) and The Shadows of Our Dates (2017), topped bookstore bestseller lists. His most recent novel Invisible (2020) was recognized by PEN Ukraine as one of the best novels of 2020, and was the subject of a play and several photo exhibitions. Ivan Baidak's short stories have been translated into English, German, Serbian, Polish, Spanish, and Italian, and presented at European literary festivals. He received a scholarship from Gaude Polonia 2020. He is from Lviv, Ukraine.

Many thanks to Ivan for sharing the story behind  (In)visible, and to Anastasia Kukhar for her translation from the Ukrainian.

For more Under the Cover stories of your favourite books, click here. 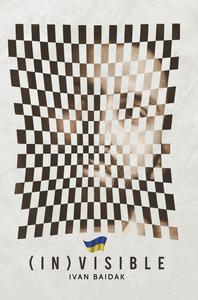