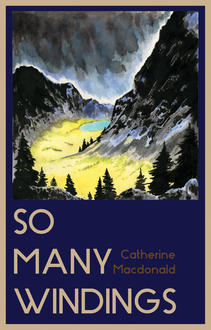 Under the Cover: Writing Scotland During the Golden Age of the Bicycle

The second in Catherine Macdonald's 3-book Charles Lauchlan mystery series, So Many Windings (At Bay Press) leaves the Canadian Prairies behind for a bicycle tour set in the 1900's highlands of Scotland, where a grisly murder awaits...

Catherine takes us further under the cover to share more about her father's fascination with Scotland and the family roots that influenced a departure in her writing from the Winnipeggian to more audacious plotting inspired by Scottish greats like Scott, Hogg, Buchan and more.

See more details below
Tagged: so many windings, catherine macdonald, at bay press, under the cover

I blame my father. Though born in Canada, he had a nostalgia-fuelled fondness for Scotland, the birthplace of his own father. This was a curious nostalgia because, until World War II landed him in Britain, Dad had never laid eyes on the place. The war simply confirmed his Scotophilia. Eventually he acquired the whole outfit: kilt, sporran, argyle socks and dirk. We were the only family on our block with a tartan doorbell. And so Scottishness became a strong part of our family identity though I always maintained that my own interest in Scotland was more clear-eyed and less sentimental than that of my father.

I had set Put on the Armour of Light, the first book of my Charles Lauchlan mystery series, in Winnipeg in 1899. That seemed natural since, in my previous life as an archivist and historian, I had been happily immersed in the history of the prairie west. And besides, Winnipeg is my hometown. I wanted to help make it a destination in the imagination as well as on a map.

Like me, my characters Charles Lauchlan and Maggie Skene had Scottish roots. When I came to write the second book in the series, So Many Windings, I was intrigued by the idea of sending them to Scotland. The book doesn’t have a subtitle, but if it did, it would be, “Winnipeggers Collide with Scotland”. For the turn of the twentieth century marked the beginning of large numbers of eager Canadians descending on Scotland to commune with the spirits of their ancestors.

Then the question became, “What will my characters do when they get to Scotland?” I have always loved biking and have had some experience with long-distance bicycle touring. The book is set in 1900 during the golden age of the bicycle. So, Charles and Maggie join a bicycle tour of the Highlands, the region of Scotland that was then just beginning to open up to tourists. When I added a cast of diverse characters to accompany Charles and Maggie on their tour, I had the key ingredients for a kind of moving closed-room murder mystery.

As I got further into the writing, a strange thing happened. There is a deep layering of images and stories about Scotland built up over many centuries and shared widely in the English-speaking world. I found myself in the same fictional space with Walter Scott, James Hogg, Robert Louis Stevenson and John Buchan; with ancient family feuds, dark examinations of the nature of sin, of romantic lost causes and chases through the heather. My plotting became more audacious and less Winnipeggian as some of the echoes of these masters crept into the book. And this caused me, finally, to admit that my fascination with Scotland is not as analytical as I had thought. I am my father’s daughter after all.

Catherine Macdonald enjoyed a varied career as an archivist and freelance historian before turning to crime. Her first mystery novel, Put on the Armour of Light, won the Michael Van Rooy Award for Genre Fiction at the 2016 Manitoba Book Awards. Fifty Words for Rain, forthcoming from At Bay Press, is the sequel to that book and finds the characters in Scotland where they tour the Highlands by bicycle.

Where in Canada: A history of Toronto's cultural scene

May 31, 2019
Character Study: The Captain of Kinnoull Hill